We identified influenza C virus (ICV) in samples from US cattle with bovine respiratory disease through real-time PCR testing and sequencing. Bovine ICV isolates had high nucleotide identities (≈98%) with each other and were closely related to human ICV strains (≈95%). Further research is needed to determine bovine ICV’s zoonotic potential.

The most common influenza pathogen is influenza A virus, which can infect humans, pigs, cattle, birds, as well as other animals (2,4). ICV was first identified in humans in 1947. This group of influenza viruses was initially thought to exclusively infect humans until isolates were identified in pigs in China (5,6) and Japan (7). Antigenic and genetic analyses suggest that ICV might transmit between humans and pigs in nature (8); however, interspecies transmission has not been confirmed experimentally. In 2011, an influenza C–like virus was identified in swine and cattle in the United States (9); this virus was initially proposed to be an ICV subtype but was later identified as influenza D virus (3) because the virus had ≈50% overall amino acid identity with human ICV strains, a level of divergence similar to that between influenza A and influenza B viruses.

Although influenza viruses of other genera can infect cattle, the potential for ICV infection in cattle has not been previously investigated. The objective of this study was to determine if ICV can be found in specimens from cattle with bovine respiratory disease and, if so, determine the prevalence.

Co-infections with >1 pathogen are common in BRDC cases. ICV-positive samples were also found to be positive for >1 bovine respiratory disease pathogen (n = 12, Table 1), the most common being M. bovis (9/12), followed by H. somni (7/12), and M. haemolytica (6/12). Among the ICV-positive samples, ICV12 was strongly positive (Ct 15.81); this sample was also positive for M. haemolytica and P. multocida, both bacterial pathogens commonly associated with secondary infections. Other BRDC pathogens associated with secondary infections (M. bovis, bovine viral diarrhea virus, and H. somni) were also detected in samples ICV4, ICV16, ICV18, and ICV20 (11–13). These results suggest that ICV is associated with bovine respiratory disease in cattle.

We further evaluated 12 strong positive (Ct<31) samples by sequencing a 590-bp fragment of their matrix gene. Alignment of the partial matrix gene sequences indicated that the isolates in 3 samples (ICV2, ICV3, and ICV4) obtained from different cattle on the same farm in Oklahoma were identical. Because these 3 influenza viruses were most likely the same strain, the virus in just 1 sample (ICV2) was used for phylogenetic analysis. The matrix gene sequence in sample ICV5 from Missouri (GenBank accession no. MH421866) was identical to that in ICV6 from Colorado (GenBank accession no. MH421867). 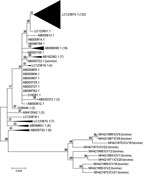 Figure. Phylogenetic tree of 10 bovine ICV isolates compared with 1 porcine and 195 human ICV isolates (not labeled), United States. Some subtrees containing only human isolates were collapsed to decrease the...

This study confirms the presence of ICV in US cattle with clinical signs of bovine respiratory disease. Although interspecies transmission of influenza viruses occurs between humans and other animals, we do not have data that indicates ICV is a zoonotic pathogen. However, the full genome sequence of C/bovine/Montana/12/2016 has 97.1% nucleotide identity with the human isolate C/Mississippi/80, which is within the range of average identities among human isolates. More detailed investigations are needed to confirm if ICV is involved in bovine respiratory disease, to characterize the relationship between bovine and human ICV strains, and to determine the zoonotic potential of bovine ICV isolates to cause human disease.

Mr. Zhang is a joint doctoral student candidate at the Chinese Academy of Agricultural Sciences in Changchun, China, and Kansas State University in Manhattan, Kansas, USA. His research interests are the development and validation of molecular diagnostic assays for animal and zoonotic pathogens.

Funding for this study was provided by the Kansas State Veterinary Diagnostic Laboratory and the Swine Health Information Center.