On December 19, 2017, a high number of dead birds from various species was reported in a live bird market in Riyadh, Saudi Arabia, by the Department of Animal Resources Services, Ministry of Environment, Water, and Agriculture. Oropharyngeal and cloacal swab samples were collected from affected birds and investigated for highly pathogenic avian influenza (HPAI) viruses in Riyadh Veterinary Diagnostic Laboratory using reverse transcription PCR (RT-PCR) (1). These tests detected HPAI A(H5N8) virus. After this index outbreak, HPAI was reported in adjacent provinces. Surveillance studies were performed in all provinces (>1 major poultry market and 10 backyard farms per province) to estimate disease prevalence. As of May 2018, a total of 7,273 birds had been investigated; 805 were positive for H5N8, which was detected in 7 provinces (Riyadh, Eastern, Al-Qasim, Makkah, Al-Madinah, Asir, and Jizan). The highest number of positive results was reported in Riyadh (693 samples), in which different commercial poultry farms (22 farms for laying hens, 2 for broiler breeders, and 1 for quail) were affected. A contingency plan, based on a stamping-out policy, was implemented to control the disease. More than 8.8 million birds were depopulated.

Positive clinical specimens (N = 14) collected from different settings, different provinces, different avian species or a combination were sent to a World Health Organization H5 reference laboratory in Hong Kong for confirmation. All samples tested positive for membrane protein (M) and hemagglutinin (HA) subtype H5 genes by RT-PCR (Technical Appendix Table 1). Samples that had a cycle threshold value <29 in the M gene assay also tested positive for N8 by RT-PCR. Ten of these samples were positive for virus isolation in embryonated chicken eggs and were associated with death of the chicken embryos by day 3 postinoculation. 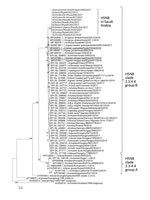 The deduced sequences revealed that H5N8 viruses (n = 11) from different sites in Saudi Arabia are almost identical (sequence identity >99.7%), indicating a common origin for this outbreak. Phylogenetic analyses of HA sequences showed that they belong to clade 2.3.4.4 group B (Figure) (3). Polymerase acidic protein (PA), HA, nucleoprotein (NP), neuraminidase (NA), M, and nonstructural protein (NS) segments were genetically similar to those derived from recent group B H5N8 viruses (Technical Appendix Table 2, Figure 1). No genetic markers associated with mammalian host adaptation, α2,6 receptor-binding specificity, or antimicrobial drug resistance were detected (data not shown) (4). The gene constellation of PA, HA, NP, NA, M, and NS segments of these H5N8 viruses is similar to those of some H5N8 viruses detected in wild migratory birds from different geographic areas (e.g., A/Anser_cygnoides/Hubei/FW44/2016 and A/green-winged teal/Egypt/877/2016) (4,5). The polymerase basic protein (PB) 1 and 2 segments of these viruses are similar to those of HPAI H5N5 viruses detected in the Far East (e.g., A/environment/Kamchatka/18/2016) and Europe (e.g., A/swan/Germany-SN/R10645/2016) (Technical Appendix Figure 1). H5N5 viruses of this lineage were previously proposed to be reassortants of an H5N8 virus (6), with the PB1 and PB2 segments derived from an H10 virus (A/duck/Mongolia/245/2015-like virus) and the PA, HA, M, and NS segments derived from a H5N8 virus. Our results agree with previous observations that H5N8 viruses of this lineage continue to evolve and reassort with other influenza virus subtypes in migratory bird populations (7,8).

The studied samples were collected from multiple avian species in different settings from 3 provinces (Technical Appendix Table 1). Of 986 samples from poultry holding sites, 182 (18.5%) tested positive for H5N8 virus. The transmission pathway of H5N8 virus in Saudi Arabia is being investigated. Molecular dating analyses suggest that the most recent common ancestor of these H5N8 viruses emerged in this country in September 2017 (Technical Appendix Figure 2). The potential roles of wild birds, backyard poultry practices, poultry trading, and other human activities in dissemination of these viruses are yet to be determined. However, our results suggest wide circulation of H5N8 viruses caused by a single introduction.

The role of the Deputy Ministership for Animal Resources at the Ministry of Environment, Water, and Agriculture (MEWA) of Saudi Arabia in quick reporting and confirmation of the HPAI outbreak is highly appreciated. The authors acknowledge all the teams that supported the H5N8 investigation from MEWA. We acknowledge the authors and the originating and submitting laboratories of the sequences from GISAID’s EpiFlu Database (http://platform.gisaid.org) with which this analysis was carried out.

The work conducted in Hong Kong was supported in part by the National Institute of Allergy and Infectious Diseases, National Institutes of Health (contract no. N272201400006C), Theme-based Research Scheme from Research Grants Council of the Hong Kong Special Administrative Region, China (project no. T11-705/14N).