We analyzed surveillance data for 2 sentinel hospitals to estimate the influenza-associated severe acute respiratory infection hospitalization rate in Beijing, China. The rate was 39 and 37 per 100,000 persons during the 2014–15 and 2015–16 influenza seasons, respectively. Rates were highest for children <5 years of age.

Influenza virus circulates worldwide, causing substantial rates of illness and death (1). In recent years, better estimates of influenza have been possible in low- and middle-income countries because of the development of surveillance systems (2,3).

Beijing is located in northern China in a temperate climate zone. Previous studies used surveillance to estimate the incidence of seasonal influenza infections in Beijing (4). However, hospitalizations associated with influenza have not been evaluated. We aimed to estimate the influenza-associated severe acute respiratory infection (SARI) hospitalization using the methods recommended by the World Health Organization (5).

We introduced screening of inpatients for SARI at 2 sentinel hospitals in Beijing during October 2014–September 2016. Throat swabs were collected from all SARI patients with their verbal consent. To explore the characteristics of severe influenza infections, we investigated the demographic characteristics and clinical courses of SARI patients (Technical Appendix). 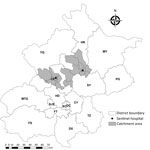 In Beijing, influenza accounted for 16.6% of SARI in the 2 years studied; the hospitalization rate for all ages was 38–39 per 100,000 persons. This finding was much lower than that reported for Jingzhou, a city in central China, in which estimates ranged from 115 to 142 per 100,000 population in the 2010–12 influenza season (8). Although a similar method was used in these 2 studies, they had several differences. First, they estimated the hospitalization rate among different influenza seasons with different influenza activity and circulating strains. Second, the influenza circulation patterns differed (9); Beijing had 1 winter peak, whereas Jingzhou had an additional peak in summer. Moreover, the SARI definition used differed between the studies, with a lower fever threshold of >37.3°C in their study. As in other studies of age-specific influenza-associated SARI or hospitalization from other regions (3,10,11), we observed the most severe influenza disease in young children (<5 years). This finding underscores a need to consider influenza vaccination programs directed toward young children.

Our study has some limitations. First, the results have limited generalizability because estimation was based on only 2 hospitals. However, 5 of the other sentinel hospitals are in the business district and serve populations of numerous districts and non-Beijing residents, making the catchment population difficult to estimate. We excluded the remaining 3 suburban sentinel hospitals because they did not have pediatric wards enrolled in SARI surveillance or the quality of their surveillance database was uncertain. Second, 19.7% of SARI patients in our study were not swabbed. We assumed the proportion of influenza-positive among them was the same as among swabbed SARI patients. However, according to clinician descriptions, most of these patients were children <5 years of age. Because the proportion of influenza-positive patients is higher among young children, we might have underestimated overall influenza-associated SARI. Third, because older adults often have complicated illness and not typical SARI symptoms, SARI might be underestimated among the older adult population. Fourth, surveillance covers only respiratory disease–related wards, but SARI patients might be hospitalized in other wards because of influenza complications (13,14), which might have led to underestimation of influenza. Finally, patients with influenza complications requiring admission might have had a relatively long delay from symptom onset to hospitalization, leading to possible false-negative laboratory results, thereby underestimating influenza.

Overall, most SARI patients in this study had influenza A, but the percentage with influenza B was also substantial. The findings of this study expanded knowledge about the impact of severe influenza and challenge the view that influenza B is a mild infection. These findings can be used to inform local policies on influenza prevention and control.

Ms. Zhang, a PhD candidate in epidemiology in the University of New South Wales, works in the Beijing Municipal Center for Disease Prevention and Control. Her research interests focus on influenza vaccine effectiveness assessment, influenza burden estimation, and risk assessment of influenza and other respiratory infectious diseases.

We are grateful to Jérôme Ryan Lock-Wah-Hoon’s help in polishing our language.

Page created: October 16, 2018
Page updated: October 16, 2018
Page reviewed: October 16, 2018
The conclusions, findings, and opinions expressed by authors contributing to this journal do not necessarily reflect the official position of the U.S. Department of Health and Human Services, the Public Health Service, the Centers for Disease Control and Prevention, or the authors' affiliated institutions. Use of trade names is for identification only and does not imply endorsement by any of the groups named above.