In support of improving patient care, this activity has been planned and implemented by Medscape, LLC and Emerging Infectious Diseases. Medscape, LLC is jointly accredited by the Accreditation Council for Continuing Medical Education (ACCME), the Accreditation Council for Pharmacy Education (ACPE), and the American Nurses Credentialing Center (ANCC), to provide continuing education for the healthcare team.

Medscape, LLC designates this Journal-based CME activity for a maximum of 1.00 AMA PRA Category 1 Credit(s)™. Physicians should claim only the credit commensurate with the extent of their participation in the activity.

All other clinicians completing this activity will be issued a certificate of participation. To participate in this journal CME activity: (1) review the learning objectives and author disclosures; (2) study the education content; (3) take the post-test with a 75% minimum passing score and complete the evaluation at http://www.medscape.org/journal/eid; and (4) view/print certificate.

Upon completion of this activity, participants will be able to:

Pyogenic liver abscesses are common intra-abdominal infections (1–4), associated with a substantial severity (5). Most (30%–70%) pyogenic liver abscesses result from a biliary origin (6), followed by a portal origin (10%−20%) complicating intra-abdominal diseases, such as appendicitis, diverticulitis, infected gastrointestinal tumors, or chronic inflammatory bowel disease. Less frequently, pyogenic liver abscesses might also occur after abdominal surgery, typically pancreato-duodenectomy associated with injury of the main hepatic artery or some aberrant hepatic arteries, split liver transplantation, or chemoembolization or ablation of liver tumors, or might result from the surinfection of preexisting hepatic lesions, such as hepatic cysts, tumors (primary or secondary), or hydatid cysts (<2%) (7,8). When none of these mechanisms are found, pyogenic liver abscesses are considered cryptogenic (no obvious cause); such abscesses account for ≈20% of cases in industrialized countries (9–12).

Typically, hypervirulent K. pneumoniae are responsible for severe monomicrobial cryptogenic pyogenic liver abscesses (11) often associated with unusual septic metastatic localizations, such as endophthalmitis or meningitis, in immunocompetent hosts. Colonies of hypervirulent K. pneumoniae grown on agar plates have a hypermucoviscous phenotype, as shown by a positive result for a string test (11). These strains express genes encoding for virulence factors, such as the hypermucoviscous phenotype (prmpA), iron acquisition systems (iutA, kfu, ybts), and the capsular serotypes K1 or K2 (magA and wzi) (26,27).

We conducted a retrospective, monocentric, cohort study at Hôpital Beaujon, a 500-bed tertiary care university hospital on the outskirts of Paris. This hospital specializes in digestive and liver diseases and is 1 of 5 major regional centers specializing in liver diseases; the hospital serves a population of 12 million persons (≈15% of the population of France). We reviewed all records from 2010–2015 in which a primary diagnosis was liver abscess. After records were made anonymous, we reviewed medical charts to confirm a diagnosis of liver abscess, which was defined by the association of typical clinical features (fever, abdominal pain); biologic abnormalities (inflammatory syndrome, increased bilirubin level); and lesions corresponding to an abscess observed by imaging (computed tomography scan, ultrasonography, or magnetic resonance imaging). Only patients with a microbiologically proven pyogenic abscess were included.

All medical records were reviewed by the same group of physicians, including clinicians (B.R., M.L.G., and A.L.) and a radiologist (M.R.), and cases were divided into 4 groups according to the suspected origin of the infection: biliary, portal, postprocedural, or superinfection of underlying liver diseases. In the absence of any of these conditions, pyogenic liver abscesses were considered cryptogenic. We then obtained K. pneumoniae pyogenic liver abscesses from each group and analyzed their epidemiologic, clinical, radiologic, and microbiological characteristics and their outcomes.

For all patients included in this study, microbiological identification was available by blood cultures or cultures of abscess drainage. At the time of disease, all strains had been identified by using the API System (bioMérieux, Marcy l’Étoile, France) or matrix-assisted laser desorption-ionization/time-of-flight mass spectrometry (Bruker, Wissembourg, France), and antibiograms had been created. For this study, all available K. pneumoniae isolates underwent other phenotypic and molecular tests. 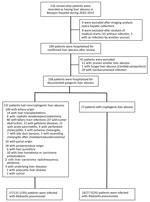 We studied 199 patients with liver abscesses managed in a single hospital during 2010−2015 and analyzed in detail 158 patients with microbiologically proven pyogenic liver abscesses. Although our study was retrospective, it had the advantage of particularly homogeneous management in a monocentric university hospital specializing in gastroenterology, liver diseases, and abdominal surgery. The main finding was that hypervirulent K. pneumoniae are now responsible for most cryptogenic liver abscesses in patients in the Paris region in France.

From a clinical point of view, our description of hypervirulent K. pneumoniae−related pyogenic liver abscesses is consistent with previous reports. These abscesses were mostly monomicrobial, rarely harbored organisms that showed antimicrobial drug resistance, occurred in persons with few concurrent conditions, were not healthcare-related, and were more likely responsible for aggressive inflammatory disease with metastatic infectious locations (17,36,37). Unlike a previous report (17), diabetes did not appear to be a risk factor for hypervirulent K. pneumoniae pyogenic liver abscesses, and Asian patients did not represent the main ethnic group (only 21% in our study vs. 50% in cohorts in the United States). In addition, hypervirulent K. pneumoniae−related pyogenic liver abscesses were usually single and located in the right hepatic lobe (17).

Our study had several limitations. First, this study was monocentric and retrospective, which might limit its epidemiologic scope. Second, information concerning patients’ travel history was missing. Third, because our center is highly specialized in liver diseases, cryptogenic hypervirulent K. pneumoniae pyogenic liver abscesses might be underestimated, and cancer or postsurgical pyogenic liver abscesses are probably overrepresented.

To obtain credit, you should first read the journal article. After reading the article, you should be able to answer the following, related, multiple-choice questions. To complete the questions (with a minimum 75% passing score) and earn continuing medical education (CME) credit, please go to http://www.medscape.org/journal/eid. Credit cannot be obtained for tests completed on paper, although you may use the worksheet below to keep a record of your answers.

Only one answer is correct for each question. Once you successfully answer all post-test questions, you will be able to view and/or print your certificate. For questions regarding this activity, contact the accredited provider, CME@medscape.net. For technical assistance, contact CME@medscape.net. American Medical Association’s Physician’s Recognition Award (AMA PRA) credits are accepted in the US as evidence of participation in CME activities. For further information on this award, please go to https://www.ama-assn.org. The AMA has determined that physicians not licensed in the US who participate in this CME activity are eligible for AMA PRA Category 1 Credits™. Through agreements that the AMA has made with agencies in some countries, AMA PRA credit may be acceptable as evidence of participation in CME activities. If you are not licensed in the US, please complete the questions online, print the AMA PRA CME credit certificate, and present it to your national medical association for review.

1.   You are called to evaluate a 63-year-old man with a 5-day history of right abdominal pain and fever. Results on ultrasound examination of his abdomen suggest a liver abscess. What should you consider regarding the pathogenesis of pyogenic liver abscesses (PLAs)?

A.  Most cases of PLAs are related to recent abdominal surgery

B.  Most cases of PLAs originate in the biliary tract

C.  Most cases of PLAs are cryptogenic in origin

D.  Klebsiella pneumoniae is the organism most commonly involved in PLAs

2.   The patient undergoes drainage of his abscess, and a culture of the abscess grows K. pneumoniae. According to the results of the current study, what might you expect regarding clinical features of his infection?

A.  The majority of patients with positive culture results for K. pneumoniae had a history of liver transplantation

B.  K. pneumoniae was more common in cryptogenic vs. noncryptogenic infections

3.   What should you consider regarding microbiologic outcomes in the current study as you consider treatment options for this patient?

C.  Hypervirulent K. pneumoniae was found in only a small percentage of cases of cryptogenic PLAs

Page created: January 11, 2018
Page updated: January 11, 2018
Page reviewed: January 11, 2018
The conclusions, findings, and opinions expressed by authors contributing to this journal do not necessarily reflect the official position of the U.S. Department of Health and Human Services, the Public Health Service, the Centers for Disease Control and Prevention, or the authors' affiliated institutions. Use of trade names is for identification only and does not imply endorsement by any of the groups named above.