Investigation of a scrub typhus outbreak in Thailand during September 2013 found that 9.1% of Thai soldiers and 11.1% of residents living in areas surrounding training sites had antibodies against the causative agent, Orientia tsutsugamushi. Sequence analysis of O. tsutsugamushi from rodents and chiggers identified 7 genogroups and 3 genotypes.

Although scrub typhus is one of the leading causes of acute febrile illnesses (AFI) in the Asia-Pacific region, with an estimated 1 million cases annually (1,2), its overall molecular epidemiology remains unclear. Scrub typhus occurs when humans are bitten by parasitic larvae of trombiculid mites (chiggers) harboring the bacterium Orientia tsutsugamushi. Chiggers primarily infest mammals, such as rodents, that dwell in tall grasses and scrub vegetation; thus, activities such as camping and hiking can lead to scrub typhus (3,4). Although scrub typhus is treatable with doxycycline if diagnosed early, the median fatality rate among scrub typhus patients is 6%, and the fatality rate may reach 20% among untreated patients (5,6). No effective vaccine is currently available because of high variation in O. tsutsugamushi immunogenicity (7,8). 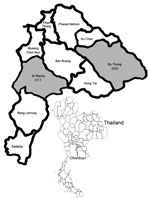 During September 2013, a group of 110 RTA soldiers conducted operational field training near the Bang Phra Navy Agriculture Center in Si Racha (Figure 1). Two to 3 weeks after training, 10 soldiers experienced sudden onset of high-grade fever with clinical symptoms including intense headache, chill, and retroorbital eye pain. Eight of these soldiers were hospitalized at Fort Nawamintharachini Hospital, and the other 2 were admitted to other hospitals in Chonburi. Physical examinations revealed that 37.5% had necrotic lesions similar to eschar. Serum samples were send to AFRIMS for diagnostic tests for the most likely pathogens: PCR for dengue viruses and indirect immunofluorescent assay and dot ELISA for rickettsioses (10,11) ( Table 1).

Serologic analysis showed that all patients had positive antibody titers against STG, suggesting active infection. Patients were treated with oral doxycycline, and fever subsided within 24 h without any sequelae. For the 2 soldiers admitted at different hospitals, the serum samples from the acute and convalescent phases were not available for the assay but were collected for follow-up analysis. Serologic analysis suggested that these soldiers had higher titers of STG IgM and IgG, indicating history of O. tsutsugamushi infection.

To determine the exposure of the troops to disease vectors in the training areas, we identified the serostatus of 100 additional RTA soldiers who conducted field training exercises in the same areas and of 27 residents and workers in the agriculture center. All 127 participants were healthy and afebrile at the time of blood collection. Serum tests of the residents and workers revealed that 3/27 had STG IgG, suggesting high exposure to O. tsutsugamushi. According to interviews, 24 soldiers reported experiencing AFI during training. Test results demonstrated that none of these soldiers had O. tsutsugamushi infection during the training period. We concluded that seroprevalence of STG antigens among the troops was 9.1% and among residents, 11.1%. 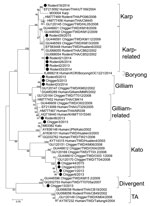 Because rodents influence mite population density (12,13), we surveyed for chiggers and small rodents in these areas to determine the etiology associated with scrub typhus outbreak and evaluate the effectiveness of the prevention program. We conducted surveys in 3 consecutive years (August 2014, November 2015, and August 2016) by following a previously described protocol (10). We surveyed areas covering a 10-km radius near training sites with small villages and various vegetation characteristics. We collected rodent liver, spleen, and serum specimens and stored them in liquid nitrogen. We removed chiggers from rodents’ ears and preserved them in 70% ethanol. We slide-mounted approximately one fifth of chigger samples from each rodent for species identification and subjected the remaining chiggers to nucleic acid extraction. We extracted nucleic acid from chiggers and rodent liver and spleen samples using GeneJET Viral DNA/RNA Purification Kit (Invitrogen, Waltham, Massachusetts, USA) and assayed samples for O. tsutsugamushi DNA using 47-kDa quantitative PCR and 56-kDa nested PCR (14). We bidirectionally sequenced partial sequences of 56-kDa genes (First BASE Laboratories, Singapore) and used BioEdit software (http://bioedit.software.informer.com/7.1/) with the ClustalW algorithm to align nucleotide sequences with the sequences of O. tsutsugamushi prototypes and variants retrieved from GenBank. We constructed phylogenetic trees using MEGA software (http://www.megasoftware.net/) (Figure 2).

We captured a total of 45 rodents, accounting for a 7% capture rate. Bandicota (n = 5) and Rattus (n = 30) spp. rats were the most commonly trapped small mammals (77.8%), followed by ground squirrels (Menetes berdmorei, 17.8%) and tree shrews (Tupaia glis, 4.4%) (Table 2). Of the small mammals collected, 71.1% (32/45) tested STG seropositive. Most ectoparasites collected from rodents were chigger mites (88.9%), with Leptotrombidium deliense (72.1%) the predominant species of the 400 individual chiggers identified. A total of 20% of rodent liver and spleen samples and 15.6% of individual chiggers were PCR positive for O. tsutsugamushi. Phylogenetic analyses of the 56-kDa genes of 9 rodent and 7 chigger samples suggested that sequences were clustered in 3 genogroups and were closely related to 3 genotypes (Karp-related, Kato-related, and Gilliam-related genotypes) with 92.6%–99.8% nucleotide identity with reference sequences (Figure 2). Variants from the same clusters showed 94%–98% nucleotide identity with each other. Additionally, phylogenetic trees suggested that O. tsutsugamushi strains recovered from chiggers differed from those of rodent hosts, indicating high genetic variation of O. tsutsugamushi strains circulating in the survey areas.

High seropositive status for O. tsutsugamushi among RTA soldiers and the presence of disease-carrying vectors and rodent hosts trapped in training and surrounding areas indicate that soldiers in these areas are at risk of scrub typhus, with the infection rate estimated at 9%–11%. Military personnel and residents who participate in exercises or travel to these areas in Chonburi should be alerted to the risk for scrub typhus. Appropriate protection, such as proper use of treated uniforms and application of topical insect repellent, are recommended to prevent chigger bites. Environment modification, including vegetation cleanup and trash consolidation, is necessary to control rodent and chigger populations in training location and decrease disease transmission.

Dr. Rodkvamtook, a colonel in the Royal Thai Army, works as the Deputy Director of the Research Division, RTA-AFRIMS, Bangkok. His research projects include epidemiology of scrub typhus and rickettsiae, chiggers in Thailand, and diagnostic test kit development for rickettsiosis.

RTA-AFRIMS and the Association of Military Surgeons of Thailand under the Royal Patronage of His Majesty the King provided financial support for this project. This research was supported in part by the Global Emerging Infections Surveillance and Response System (GEIS), a division of the Armed Forces Health Surveillance Branch to the Department of Entomology, USAMD-AFRIMS, with support to A.L.R. under work unit number 0000188M.0931.001.A0074. We also thank the soldiers of the RTA for their participation.

Material has been reviewed by the Walter Reed Army Institute of Research. There is no objection to its presentation and/or publication. The opinions or assertions contained herein are the private views of the authors, and are not to be construed as official, or as reflecting true views of the Department of the Army or the Department of Defense. A.L.R. and C.-C. C. are employees of the U.S. Government. This work was prepared as part of their official duties. Title 17 U.S.C. §105 provides that Copyright protection under this title is not available for any work of the United States Government. Title 17 U.S.C. §101 defines a U.S. Government work as a work prepared by military service member or employee of the U.S. Government as part of that person’s official duties.