We detected Cache Valley virus in Aedes japonicus, a widely distributed invasive mosquito species, in an Appalachian forest in the United States. The forest contained abundant white-tailed deer, a major host of the mosquito and virus. Vector competence trials indicated that Ae. j. japonicus mosquitoes can transmit this virus in this region.

Cache Valley virus (CVV; family Bunyaviridae, genus Orthobunyavirus) is widespread throughout North and Central America and infects many species of domestic ungulates (sheep and cattle), but white-tailed deer are a likely reservoir (1). Although this virus has been isolated from >30 mosquito species in several genera, the principal vectors remain unknown (2,3). However, on the basis of field isolations and laboratory transmission studies, Anopheles quadrimaculatus and An. punctipennis mosquitoes probably play major roles in its transmission cycle (1,4).

CVV infection is common in sheep and causes spontaneous abortion, stillbirth, and congenital defects (5). The virus is neuroinvasive in humans, and there have been 3 confirmed cases and 1 death in the United States (2,6). Medical laboratories rarely test for CVV, which underestimates its true incidence and effect on human health, but serologic studies have reported high human infection rates (up to 18%) in virus-endemic areas (7). We report detection of CVV in the invasive mosquito Aedes japonicus japonicus in Blacksburg, Virginia, USA, and demonstrate that this species is a competent vector of the virus.

We collected adult mosquitoes during June 1–August 21, 2015, by using gravid traps in a forested area (area 196,115 m2) (Figure 1). We collected 1,197 Ae. triseriatus and 690 Ae. j. japonicus adult female mosquitoes; identified them to species on the basis of morphology; and pooled them by species, trap number, and date (Table 1). Pools (626 of Ae. triseriatus and 442 of Ae. j. japonicus) consisting of 1–50 mosquitoes were stored at −80°C. We screened samples on Vero cells for cytopathic effect and confirmed the presence of virus in positive samples by using a plaque assay (8).

We amplified virus isolates on Vero cells to a titer of 105 PFU/mL and extracted virus RNA from infected cell supernatants by using the QIAamp Viral RNA Mini Kit (QIAGEN, Valencia, CA, USA). We used reverse transcription PCR and Bunyaviridae-specific universal primers BCS82C and BCS332V to produce a 251-bp amplicon of the small RNA segment, which was then sequenced (9). Sequencing was performed by Eton Bioscience, Inc. (San Diego, CA, USA). A BLAST (http://blast.ncbi.nlm.nih.gov/Blast.cgi) query indicated that the isolates were CVV. 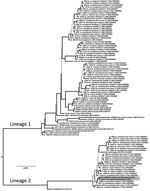 We used the medium RNA segment to infer phylogeny with CVV isolates reported by Armstrong et al. (10). We translated RNA sequences to amino acid sequences and aligned them visually, which was trivial because of invariant length and lack of insertion−deletion events. The alignment was composed of 1,803 bp from 100 isolates. We partitioned sequences by codon position and evaluated alternative models of nucleotide site substitution. We inferred phylogenetic trees by using a Markov chain Monte Carlo method in MrBayes 3.2.5 with a simultaneous estimation of topology, branch lengths, and other parameters (11). Stabilization of 4 concurrent chains occurred at 1 million generations, and the first 250,000 trees were discarded as a burn-in. We averaged branch lengths and other parameters and constructed a consensus tree (Figure 2) from the posterior distribution that contained support values for each clade in posterior probabilities.

CVV isolates were grouped into 2 clades or lineages (Figure 2) (10). Lineage 1 viruses were from the United States and Canada during 1952–2011 and lineage 2 were more recent strains from the northeastern United States. Virus isolates from Virginia were genetically similar to each other (3-bp differences) and grouped in the newly emergent lineage 2 of CVV. This monophyletic lineage shares a most recent common ancestor with a virus from Mexico isolated in 1961 (GenBank accession no. AF231118). This sister-group relationship suggests a derivation of this group from Mexico (10). However, additional historical samples from the region in Veracruz, Mexico, and elsewhere during the history of its introduction into the northeastern United States would further provide understanding of the phylogeography of the virus.

To determine vector competence of local mosquitoes for CVV, we established a laboratory strain from uninfected Ae. j. japonicus mosquitoes. Week-old female mosquitoes from the F2 generation were offered an infectious blood meal in a membrane feeder. This blood meal contained 1 mL of the CVV-4B isolate and 9 mL of sheep blood (Colorado Serum Company, Denver, CO, USA). We transferred postfeeding, engorged mosquitoes to 0.7-L cages and held them for 14 days at 25°C, a relative humidity of 75%, and a 16:8 (L:D) photoperiod and provided 10% sucrose. We measured rates of nondisseminated and disseminated infection (virus present in legs and wings) and oral transmission (virus present in saliva). We conducted this experiment 3 times.

Infectious blood meal titers ranged from 1.6 × 105 to 4.6 × 106 PFU/mL (Table 2). Ae. j. japonicus female mosquitoes were susceptible to oral infection with CVV and capable of transmitting the virus. After a 14-day incubation, CVV was present in 41% of abdomens, 38% of legs and wings, and 28% of saliva samples (Table 2). We found no significant differences among the 3 replicates for infection or transmission rates (p>0.05 by χ2 test).

At the time of this study, Dr. Yang was a medical entomologist and chemical ecologist in the Department of Entomology Department, Virginia Polytechnic Institute and State University, Blacksburg, VA. He is currently a microbiologist at the California Department of Public Health, Richmond, CA. His research interests are the ecology and surveillance of vectorborne diseases.