We report infection of humans with highly pathogenic avian influenza A(H7N9) virus in Shaanxi, China, in May 2017. We obtained complete genomes for samples from 5 patients and from live poultry markets or farms in 4 cities. Results indicate that H7N9 is spreading westward from southern and eastern China.

Avian influenza A(H7N9) virus caused 5 waves of human infection in China from its emergence in 2013 (1) through May 17, 2017. During that period, 1,564 laboratory-confirmed human cases and 612 deaths were reported; about half occurred during the fifth wave (2). The fifth wave not only infected many more persons but also spread north; previous H7N9 outbreaks had been documented only in eastern and southern China. Moreover, viruses recently isolated from human case-patients in Guangdong Province (A/Guangdong/17SF003/2016 and A/Guangdong/17SF006/2017) in southern China have been confirmed as highly pathogenic avian influenza (HPAI) A(H7N9) viruses, on the basis of their molecular (3) and biologic (4) characteristics.

We report cases of human infection with H7N9 virus, including in 1 person who was infected with a highly pathogenic variant, in Shaanxi Province, western China, during April and May 2017. We obtained complete genome sequences of H7N9 viruses from 5 patients and from 21 environmental samples obtained from live poultry markets (LPMs) and from poultry farms in 4 cities.

A case of HPAI H7N9 virus infection in a human from Shaanxi Province was identified in the city of Yulin on May 26, 2017. On day 1 of illness onset, fever and fatigue developed; after 2 days, the patient received medical attention. On day 4, the patient was admitted to an intensive care unit, and on day 6, HPAI H7N9 infection was laboratory confirmed. After treatment with oseltamivir, the patient recovered. An additional 4 cases of infection with low pathogenicity avian influenza (LPAI) A(H7N9) virus among humans were identified during April 30–May 13, 2017, in Shaanxi Province: 2 in Xianyang, 1 in Baoji, and 1 in the capital city, Xi’an. Recorded symptoms included fever (100%); cough and fatigue (75%); and productive cough, diarrhea, and shortness of breath (50%). Patients received medical attention at an average of 3.75 (range 1–5) days after illness onset and were admitted to a hospital at an average of 6 (range 4–8) days after onset. Samples were laboratory confirmed as H7N9 virus at an average of 9 (range 6–14) days after onset. Of the 5 patients, 4 were treated with oseltamivir; 2 of those died.

During May 2017, we collected 496 environmental samples (poultry feces and poultry cage swabs from LPMs and poultry farms) from 4 cities (Xi’an, Baoji, Xianyang, and Yuli) in Shaanxi Province (Technical Appendix Table 1). A total of 14 samples from LPMs were positive for H7N9 virus. 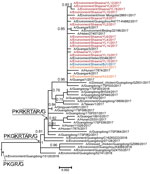 Phylogenetic analyses of HA and NA gene segments reveal that the viruses obtained from human cases in Yulin and Baoji were genetically similar to those from environmental samples collected from local farms or LPMs in Yulin and Baoji (Technical Appendix Figure 1, panel A; Technical Appendix Figure 2), suggesting that the human H7N9 infections are related to viruses circulating in local farms or LPMs. This hypothesis is also supported by most internal gene segments, except for the NS segments of viruses from Yulin (no internal gene segments were obtained for isolate A/Environment/Shaanxi/BJ2/2017 sampled in Baoji). Most of the gene segments of the viruses from human cases in Baoji and Xianyang were similar to those of A/Environment/Shaanxi/XA4/2017, the virus isolated from LPMs in Xi’an (with the exception of PB1 from the human case in Baoji and PB2, PB1, and matrix of the viruses from human cases in Xianyang). The NS and polymerase acidic segments of the LPAI virus from a human case in Xi’an (A/Shaanxi/XA1/2017) were genetically similar to the HPAI viruses we isolated; other gene segments were close to LPAI viruses from Anhui Province in southern China.

We report emerging HPAI H7N9 variants in Shaanxi Province, western China. Our phylogenetic analyses support that the LPAI H7N9 viruses in Shaanxi Province originated from eastern and southern China, and the Shaanxi HPAI H7N9 isolates probably originated in Guangdong Province and were transmitted either directly or indirectly through other provinces.

Our results provide evidence that H7N9 viruses infecting humans in Shaanxi Province derived, directly or indirectly, from strains circulating in local farms and LPMs. Previous studies suggest that poultry trade between LPMs may play a key role in spreading H7N9 viruses (11). Similarly, we hypothesize that live poultry or poultry product transport may facilitate the spread of HPAI H7N9 viruses out of Guangdong Province and within Shaanxi Province.

Dr. Yang is a postgraduate student at State Key Laboratory of Remote Sensing Science, College of Global Change and Earth System Science, Beijing. Her research interests are phylogenetics and phylodynamics of influenza viruses.

We thank Katie Oakley for her valuable comments and help.

This work was supported by the National Natural Science Foundation of China (81673234); National Key Research and Development Program of China (2016YFA0600104); the Fundamental Research Funds for the Central Universities; Health Industry’s Special Research Funds for Public Welfare Projects (201502020); Shaanxi Provincial Projects for Serious Disease Prevention and Control (2014A7); and Science and Technology Project of Shaanxi Province (2016E010, 2016D092, 2016D095; http://www.sxcdc.com/). The funding sources had no role in the study design, data collection and analysis, decision to publish, or preparation of the manuscript.