Leptospirosis is a zoonotic disease caused by the pathogenic spirochetes of the bacterial genus Leptospira (1). Although leptospirosis is mainly prevalent in tropical and subtropical countries (2), it is considered an emerging or reemerging zoonosis of global public health concern (1). In China, leptospirosis is listed as a category B notifiable disease (3). Globally, rodents are recognized as important reservoir hosts (4); however, a growing number of studies highlight the potential role of bats in the epidemiology of Leptospira (4). So far, knowledge on Leptospira in bats in China is lacking. Therefore, we screened archived bat kidney samples for Leptospira species to evaluate the potential role of bats in the ecology of Leptospira in China.

During July–October 2015, we captured 124 insectivorous bats with nets in Mengyin County, Shandong Province, China; the bats were initially intended for viral metagenomic analysis. Details regarding anesthetization of bats and tissue sampling were described previously (5). We collected the kidneys, storing them at −80°C until analysis. We identified bat species by using PCR amplification and DNA sequencing of the cytochrome B (cytB) gene as described previously (6). The 124 bats were classified into 4 species of the Vespertilionidae family (26 Eptesicus serotinus bats from 2 farmers’ houses, 30 Myotis fimbriatus bats and 10 M. ricketti bats from a city sewer, and 58 Myotis pequinius bats from a karst cave). 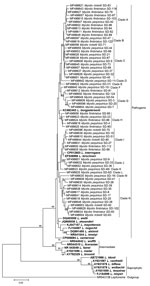 Figure 1. Neighbor-joining phylogenetic tree based on rrs2 gene of Leptospira isolates from bats, Mengyin County, Shandong Province, China, and reference Leptospira sequences from GenBank (boldface). We constructed the tree with the rrs2... 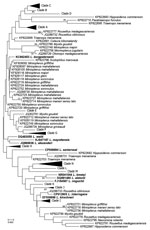 Figure 2. Neighbor-joining phylogenetic tree based on rrs2 gene of pathogenic Leptospira isolates from bats, Mengyin County, Shandong Province, China, and reference Leptospira sequences from GenBank that had been previously isolated from bats...

Because we conducted MLST using kidney DNA rather than DNA from isolates, the results were arduous to obtain. Only 35 of the 62 rrs2-positive bats were successfully amplified for >1 gene. For three samples, SD-49, SD-88, and SD-112, all 7 loci were obtained. We uploaded the allele data to the Leptospira MLST database and assigned a novel allele number for each gene (Technical Appendix Table). According to the allelic profiles, we classified the organisms as L. kirschneri, assigning all 3 with novel STs (ST244 for SD-49, ST246 for SD-88, and ST245 for SD112).

We obtained 32 incomplete allelic profiles in all. After searching the Leptospira MLST database for each gene, we found that the loci of this study could not match with any known alleles and that they represented novel alleles; however, novel alleles could not be assigned for incomplete allelic profiles. Phylogenies based on each of the 7 genes showed inconsistent topologies for individual bats, indicating co-infection with different Leptospira species in the Mengyin County bats (Technical Appendix Table, Figures 1–7). For SD-103, for example, we amplified 5 of the 7 genes. On the basis of glmU, tpiA, pfkB, and mreA, SD-103 clustered with L. borgpetersenii; however, on the basis of sucA, SD-103 fell into the group of the potentially new Leptospira sp. 2.

Because we did not conduct culture isolation with the archived bat kidney samples, further isolation with fresh bat kidney or urine samples will be needed to enable a thorough genotyping analysis of Leptospira species in the Mengyin County bats. Altogether, our study suggested that bats in Mengyin County carried a wide diversity of Leptospira, and the actual genetic diversity is likely even higher.

So far, Leptospira has been detected in ≈50 bat species belonging to 8 bat families from tropical and subtropical regions as well as part of Europe (4). Although the role of bats as carriers of Leptospira associated with human leptospirosis remains uncertain, intrusion into bat habitats and increasing urbanization that results in the cohabitation of bats and humans are likely to increase the opportunity for batborne Leptospira spillover (11). Moreover, bats might play an important role in the epidemiology of Leptospira through transmission between bats and rodents, with rodents being a major source of human infection (12).

Myotis spp. bats in Mengyin County in Shandong Province of China showed a high rate of infection with Leptospira borgpetersenii, L. kirschneri, and several potentially new Leptospira species, suggesting that bats are important carriers of Leptospira in Mengyin County. To date, knowledge of batborne leptospirosis is lacking, and the monitoring of the potential spillover of batborne Leptospira to humans is needed.

The collection of bats for microbiologic studies was approved by the Ethics Committee of Prevention Medicine of Shandong University (approval no. 20150501). Bats were captured with the help of the Mengyin County Center for Disease Control and Prevention. This study was supported by a grant from the National Natural Science Funds of China (grant no. 31570167).