Variation in Influenza B Virus Epidemiology by Lineage, China

We used national sentinel surveillance data in China for 2005–2016 to examine the lineage-specific epidemiology of influenza B. Influenza B viruses circulated every year with relatively lower activity than influenza A. B/Yamagata was more frequently detected in adults than in children.

Several recent reports have highlighted potential differences in the epidemiology of B/Victoria and B/Yamagata lineage viruses, including younger average ages of persons with B/Victoria virus infection (4,6,7) and greater transmissibility of B/Victoria viruses (4,6). Our study aimed to describe epidemiologic patterns of influenza B virus activity in China and to identify and compare the seasonality and age distribution of persons with medically attended influenza B/Victoria and B/Yamagata virus infections.

The Chinese Center for Disease Control and Prevention coordinated influenza surveillance in sentinel clinics during October 2005–March 2016. Sentinel hospitals in provinces in southern China conducted year-round surveillance; in northern China (except for Liaoning, Gansu, and Tianjin provinces, where year-round surveillance was conducted), surveillance was suspended from April to September before 2009 because influenza has low activity in summer in these temperate areas of China (8). Sentinel surveillance was then expanded from 193 to 554 hospitals conducting year-round surveillance in all provinces since 2009. Sentinel hospitals reported the number of outpatients and the number of outpatients with influenza-like illness symptoms on a daily basis. Respiratory specimens collected from a subset of outpatients with influenza-like illness were tested for influenza viruses. Each sentinel hospital in northern China was required to collect 10–15 samples per week during October–March and 5–15 samples per month during April–September for virus testing, and the hospitals in southern China tested 5–15 samples per week throughout the year. Most laboratories had adopted real-time PCR for lineage identification since 2009; some laboratories still use virus culture followed by hemagglutination inhibition test (Technical Appendix). Individual data on age, sex, and date of specimen collection also were reported for all selected patients for virus testing (Technical Appendix). Because national influenza sentinel surveillance was part of a routine public health investigation, the study was exempt from institutional review board assessment, and all data were delinked from identifiable personal information.

We found that influenza B/Victoria and B/Yamagata lineages circulated every year in mainland China during 2005–2016 and were mostly active during the winter–spring seasons (Figure 1). Influenza B virus activity was generally less intense than influenza A activity and less apparent during the 2005–06, 2010–11, and, particularly, 2012–13 seasons (Figure 1; Technical Appendix Figure 1).

Influenza B/Victoria activity increased in every season before and during the first wave of infections with influenza A(H1N1)pdm09 virus in China in late 2009, whereas substantial virus detections were only seen in the early 2011–12 and 2015–16 seasons during the postpandemic period. B/Yamagata lineage led to 3 major epidemics during the 2007–08, 2013–14, and 2014–15 seasons (Technical Appendix Figure 1). These major epidemics were associated with prolonged influenza activity, particularly during summer periods and in provinces and municipalities with lower latitude, which occurred during 2008–2011 for B/Victoria lineage and during the 2007–08 and 2014–15 seasons for B/Yamagata lineage (Figure 1). 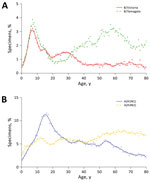 Children 5–15 years of age had the highest detection rates among all age groups for both lineages. The rates of detection of B/Victoria lineage viruses decreased with age after peaking at 10 years of age, and the rates of B/Yamagata lineage virus infections generally increased among persons >25 years of age to a second peak in older adults (Figure 2, panel A). The patterns differed somewhat across provinces and municipalities without systematic variation by latitude (Technical Appendix Figure 2). In comparison, influenza A(H1N1) showed an age pattern similar to that for B/Victoria but with a later peak, at 10–20 years of age; however, influenza A(H3N2) indicated largely comparable virus detections across different age groups (Figure 2, panel B).

Our study showed that influenza B virus generally was relatively less active than influenza A virus (Figure 1; Technical Appendix Figure 1). Influenza B/Yamagata caused fewer epidemics than B/Victoria during the study period, largely consistent with findings from a study using sentinel surveillance data from multiple countries (10). The alternating predominance of the B/Victoria and B/Yamagata lineages, especially after 2009, and the low influenza B virus activity in China during the 2012–13 season might reflect the complex interactions between population immunity and virus evolution of influenza B lineages (11).

Our study suggested a potential difference in the age patterns of persons infected with B/Yamagata and B/Victoria (Figure 2). The elevated proportions of infections with both lineages in children might indicate a lack of exposure to the virus early in life (4,12). However, the discrepancy in susceptibility to infections with B/Victoria and B/Yamagata in older adults might reflect the genetic difference in viruses of the 2 lineages, although previous exposure to different lineages and vaccination history might have had an effect. Antigenic analysis indicated that circulating B/Yamagata strains in general showed a larger genetic diversity than B/Victoria strains (4). This genetic diversity may lead to a substantial number of persons infected with a certain strain of B/Yamagata virus who are susceptible to the other co-circulating strains of the same lineage. The declining frequency of B/Victoria detections with age, however, implied a gradually strengthened immunity in older persons, which could be attributed to accumulated immunity from exposure to virus strains with fewer genetic changes or possibly to the boosted heterologous immunity against B/Victoria viruses induced by exposure to B/Yamagata viruses (13).

The study has several limitations. First, expansion of the national sentinel surveillance system in China since 2009 might have affected the observed patterns in virus activity because of inclusion of sentinel clinics providing healthcare services specifically to certain populations, such as patients in respiratory or pediatric outpatient clinics, although we weighted virus activity by age in the analysis. Second, the wider application of PCR in national surveillance laboratories might have led to an artificial increase in virus activity; however, we assumed that this change would not differ between the 2 lineages.

Further work could examine the degree of cross-protection conferred by infections of the opposite lineage, if any (13,14). Results from such studies would further elucidate the epidemiology of influenza B virus and optimize vaccination strategies in China.

We thank the staff members at the hospitals; local health departments; and county-, district-, prefecture-, and provincial-level centers for disease control and prevention for their valuable assistance in coordinating data collection.

This study was funded by the National Science Fund for Distinguished Young Scholars (grant no. 81525023), the US National Institutes of Health (Comprehensive International Program for Research on AIDS grant U19 AI51915), Chinese Center for Disease Control and Prevention’s Key Laboratory of Surveillance and Early Warning on Infectious Disease, the Harvard Center for Communicable Disease Dynamics from the National Institute of General Medical Sciences (grant no. U54 GM088558), the Research Grants Council of the Hong Kong Special Administrative Region, China (project no. T11-705/14N), the National Natural Science Foundation of China (grant no. 81402731), and the Natural Science Foundation of Shanghai (grant no. 14ZR1444500).

Variation in Influenza B Virus Epidemiology by Lineage, China