In 2017, we surveyed forests in the upper Tennessee Valley, Tennessee, USA. We found Ixodes scapularis ticks established in 23 of 26 counties, 4 of which had Borrelia burgdorferi sensu stricto–infected ticks. Public health officials should be vigilant for increasing Lyme disease incidence in this region. 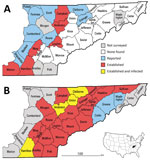 In the United States, Lyme disease caused by tickborne bacterium Borrelia burgdorferi sensu stricto occurs primarily in the Northeast and upper Midwest (1). In eastern Tennessee, which is considered nonendemic for Lyme disease, most of the human population resides in a low-elevation swath of the Tennessee Valley bordered to the west by the Cumberland Plateau and the east by the Great Smoky Mountains. The vector of Lyme disease, the blacklegged tick Ixodes scapularis, was unreported in this area before 2006; in this year, uninfected adult ticks were collected from hunter-harvested deer in 8 Tennessee Valley counties (Figure 1, panel A) (2). This finding, plus uninfected I. scapularis ticks detected in Knox County in 2013, were later incorporated into the national distribution map for I. scapularis ticks (3).

During 2000–2014, human Lyme disease cases expanded southward along the eastern foothills of the Appalachian Mountains in nearby Virginia (4). In the winters of 2012 and 2013, B. burgdorferi–infected adult I. scapularis ticks were detected in Pulaski County, Virginia (5). This report of abundant infected I. scapularis ticks only 100 km from the Tennessee border motivated us to investigate whether Borrelia-infected ticks might now be present in the Tennessee Valley.

In late 2017, we sampled host-seeking I. scapularis ticks at 70 forested sites in 26 low-elevation counties in the upper Tennessee Valley (Figure 1, panel B). To find tick habitats (hardwood or conifer forests <800 m in elevation) accessible for sampling (i.e., trails through public forests or margins of public roads through private forests), we reviewed Google Earth (https://www.google.com/earth/) satellite imagery. We sampled each site once during the peak of adult I. scapularis tick activity (late October–January). We recorded site elevation and geo-coordinates and collected host-seeking ticks using a standardized drag-cloth method; in brief, we dragged a 1-m2 white corduroy cloth across leaf litter and checked every 10 paces for attached ticks. We dragged cloths 30–60 minutes per site and described tick tallies as number collected per hour to correct for variations in effort per site. We did not conduct drag-cloth collections during periods of rain, strong wind, low air temperatures (<8°C), or low relative humidity (<40%).

No previous tick drag-cloth counts existed for the counties in our survey area, except for a 1,050-m transect of land in a forest in Anderson County, which we have drag-cloth sampled annually each December since 2012. To assess a trend in adult I. scapularis tick abundance, we applied linear regression modeling to the tick tallies from that transect of land.

We tested all I. scapularis ticks collected (N = 479) for Borrelia spp. infection; 46 ticks (9.6%) from 7 sites in 4 counties (Anderson, Claiborne, Hamilton, and Union; Figure 1, panel B) tested positive for Lyme group Borrelia by 16S rDNA PCR screening. We tested 26 samples for the intergenic spacer region by PCR; all were positive for this sequence and identified as B. burgdorferi sensu stricto by sequencing. Most infected ticks came from 2 Union County sites, which had prevalences of 44% (14/32) and 78% (18/23). No ticks were found to be infected with B. miyamotoi or other relapsing fever group borreliae.

In eastern Tennessee, public awareness and concern about ticks focuses primarily on the abundant lone star ticks (Amblyomma americanum) and American dog ticks (Dermacentor variabilis) encountered during the spring and summer. Both species can spread pathogens (9), but neither are vectors of B. burgdorferi spirochetes. Immature I. scapularis ticks are similarly active in the summer, but in southern states, these ticks typically avoid host-seeking above leaf litter and are rarely seen on humans or drag-cloths (10). For this reason, assessment of I. scapularis distribution in southern states is best achieved by acquiring adult life-stage ticks during cool season drag-cloth surveys (as reported here) or by collecting ticks from deer harvested in the fall. Inspection of hunter-harvested deer is efficient for the detection of low-density I. scapularis ticks (11). Thus, our drag-cloth sampling for I. scapularis ticks in 14 counties where none were found on deer a decade ago (Figure 1, panels A, B) suggests that tick abundance in these counties has increased. This suggestion is supported by a >3-fold increase in I. scapularis tick counts at the Anderson County site where we have 6 consecutive years of drag-cloth counts.

This study documents emergence of B. burgdorferi senso stricto in tick populations in eastern Tennessee. Infected ticks were predominantly found in high-prevalence hot spots in Union County (36.39°N). Relative to Lyme disease–endemic areas in the north, B. burgdorferi prevalence in the study area was low (10%) and had a patchy distribution (7/49 sites had positive ticks). This distribution could reflect host barriers of B. burgdorferi transmission in the South (12), or more concerning, the hot spots in Union County might reflect the beginning of an infection surge, similar to that seen in southwestern Virginia during the past decade (4).

In the United States, Lyme disease is primarily a summertime disease associated with bites from nymphal I. scapularis ticks. In southern states, detection of B. burgdorferi bacteria in adult ticks does not necessarily imply risk to humans; for example, B. burgdorferi cycles in I. scapularis populations on the Outer Banks of North Carolina, yet nymphs in that area cannot be collected on drag-cloths and no locally acquired cases of Lyme disease have been reported (13). In contrast, infected nymphs have been found on drag-cloths from surveys in Virginia, where Lyme disease incidence has spiked (14). We speculate that Borrelia-infected I. scapularis populations emerging in southwestern Virginia include immigrant ticks from the North, with some nymphs in these populations exhibiting host-seeking behaviors that lead to contact with humans. A similar invasion process might be under way in eastern Tennessee; the surveillance data reported here provide a baseline for investigating this possibility. Health officials and practitioners need to be vigilant for increasing Lyme disease incidence in Tennessee.

Dr. Hickling is professor in the Center for Wildlife Health at the University of Tennessee, Knoxville, Tennessee, USA. His research focuses on the eco-epidemiology of tickborne diseases in the southeastern United States.

We thank the University of Tennessee’s Forest Resources AgResearch and Education Center staff and land owners and managers for access to survey sites. Tyler Noll and James Hickling assisted with field collections.

This work was supported by the US Department of Agriculture National Institute of Food and Agriculture Hatch project 1012932 (to G.J.H.).