Tamdy virus (TAMV) was first isolated from the tick species Hyalomma asiaticum asiaticum collected from sheep in the Tamdinsky district of the Bukhara region, Uzbekistan, in 1971 (1). Subsequently, large-scale surveillance of TAMV from Ixodidae ticks using newborn mice successfully isolated 47 TAMV strains from various tick species from Armenia, Kazakhstan, Kyrgyzstan, Turkmenistan, and Uzbekistan, highlighting both its widespread distribution and its ability to infect mammals (2). Recently, TAMV was identified in Turkey from Hyalomma spp. ticks collected from Meriones tristrami gerbils in the Middle East (3). Sequence comparison and phylogenetic analyses of full-length TAMV genomes from different subspecies of H. asiaticum ticks taxonomically classified it in the genus Nairovirus, family Bunyaviridae (4). TAMV was also detected in 1973 from a febrile patient in Kyrgyzstan (5).

In May 2018, fourteen ticks attached to 2-humped Bactrian camels (Camelus bactrianus) were collected from a camel farm in Xinjiang, China. We extracted total RNA of the ticks using the E.Z.N.A. Total RNA Kit (Omega Bio-tek, https://www.omegabiotek.com). We used a transcriptomics approach to investigate the viruses harbored by the ticks and used the BGI mRNA Library Preparation protocol according to MGIEasy mRNA Library Prep Kit (BGI, https://www.bgi.com) to construct the RNA sequencing libraries for each tick. We conducted paired-end (100-bp) sequencing of each RNA library on the BGISEQ-500RS platform (BGI). We obtained 493,090,699 raw reads and then adaptor and quality trimmed them with the Fastp program (6), resulting in a total of 492,344,756 clean reads. These reads were de novo assembled using Trinity (7) with default settings. We compared the assembled contigs using BLASTn (http://blast.ncbi.nlm.nih.gov/blast.cg) against the nucleotide database downloaded from GenBank, with an E-value cutoff set at 1 × 10−5. 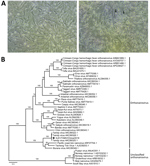 We then cultured the grinding fluid supernatant corresponding to pool 10 in Vero cells in Dulbecco Modified Eagle medium. We observed apparent cytopathic effects, such as higher cell refractive index, cell shrinkage, size reduction, rounding, and shedding, in infected Vero cells at 11 days postinfection (Figure, panel A). The virus strain was named XJ01/TAMV/China/2018 (hereafter XJ01). After 2 passages, we performed further transcriptome sequencing of the first- and second-generation virus suspension from cell cultures. We assembled the complete genome sequences of XJ01 again, as described, and found that the TAMV genomes from cell cultures were identical to those from the original sample.

To confirm the genome sequence of XJ01, we designed 14 paired primers for Sanger sequencing (Appendix Table). The consensus gene sequences of Sanger sequencing of the amplified products were consistent with those from transcriptome sequencing and were deposited in GenBank (accession nos. MK757580–2). Sequence comparison revealed that XJ01 was highly similar to 3 previously described TAMV strains from Asia; sequence identities were 94.8%–94.9% for the L segment, 93.5%–94.7% for the M segment, and 95.4%–96.8% for the S segment.

Phylogenetic analysis of representative strains of the family Nairoviridae using RAxML (9) revealed that the 4 TAMV strains clustered with high bootstrap support and fell within the Orthonairovirus genus in the RdRp tree (Figure, panel B). In addition, they were closely related to several other orthonairoviruses from ticks, including Burana virus, Tacheng tick virus 1, and Pacific coast tick nairovirus in all the RdRp, glycoprotein precursor, and nucleocapsid trees and formed a small cluster in the Orthonairovirus genus (Figure, panel B; Appendix Figures 1, 2).

We also obtained the cytochrome c oxidase gene sequence of the tick and deposited it in GenBank (accession no. MK757583). A BLASTn search (https://blast.ncbi.nlm.nih.gov/Blast.cgi) revealed that the top hit was from H. asiaticum (GenBank accession no. KX882103.1) with sequence identity of 99%; this species is a widely distributed tick in China, especially in northwestern China (10).

In summary, we identified a TAMV strain from Ixodid ticks collected in Xinjiang, China, that poses a threat to public health in Xinjiang and even globally. Because of the ability of TAMV to infect mammals including humans, the lack of effective antiviral drugs and prophylactic vaccines, and the widespread distribution of its major host in China, extensive TAMV surveillance is urgently needed.

Dr. Zhou obtained her PhD in microbiology at Shandong University and now is a lecturer at Shandong First Medical University. Her research interests include viromics and novel virus discovery.

This study was supported by the National Science and Technology Major Project (2018ZX10101004-002), the National Key Science and Technology Projects of China (2017ZX10104001-006), the Academic Promotion Plan of Shandong First Medical University & Shandong Academy of Medical Sciences, and the Strategic Priority Research Program of the Chinese Academy of Sciences (XDB29010102). W.S. was supported by the Taishan Scholars program of Shandong Province (ts201511056).