Fecal samples were tested at the National Reference Center for the Argentine National Surveillance Acute Flaccid Paralysis Program for enterovirus, including wild-type and vaccine-derived poliovirus. We screened clinical samples for enterovirus D68 (EV-D68) using a panrhinovirus and enterovirus nested PCR of enterovirus targeting the 5′ untranslated region (2). We purified the amplified products and prepared them for Sanger sequencing. We performed BLAST searches (https://blast.ncbi.nlm.nih.gov/Blast.cgi) of GenBank sequences to identify which picornavirus was present. We obtained viral protein 1 partial sequences as previously described (3). In addition, we studied a wide panel of viruses (parainfluenza virus 1, 2, and 3; influenza A/B; respiratory syncytial virus; adenovirus; metapneumovirus; rhinovirus; varicella zoster virus; herpes simplex virus; cytomegalovirus) by reverse transcription PCR (RT-PCR) and studied bacteria by culture. We performed MRI and electromyography for all patients.

Fourteen children were admitted with AFP during April–August 2016. Six were confirmed to have AFM by case definition; the other 8 had alternative diagnoses, including Guillain-Barré syndrome (3), influenza virus myositis (2), encephalitis by echovirus (in 1 child with Down syndrome), acute transient hip synovitis (1), and transverse myelitis (1). Patients’ clinical, demographic, and outcome findings are shown in Table 1, diagnostic findings in Table 2.

In 4 (66.7%) of 6 patients, we confirmed EV-D68 infection by nested RT-PCR. In 1 patient, enterovirus was detected but not typed; in 1 patient, no agent was detected. All patients had distinctive neuroimaging changes. We followed confirmed AFM cases for 6 months to assess clinical improvement.

All confirmed AFM case-patients showed T2 gray matter hyperintensity within the spinal cord on MRI. Electromyography showed early signs of denervation and low motor neuron function in all 5 patients in whom the test could be done. Specimen collection was performed 9.5 (range 3–30) days after URTI symptoms started and 7.5 (range 1–18) days after onset of neurologic symptoms. 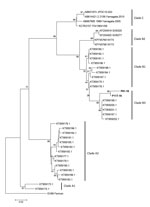 We identified enterovirus using nested RT-PCR of nasopharyngeal samples in 5 (83%) of 6 patients; 4 (80%) of 5 were typed as EV-D68, but in 1 patient (20%) the viral load was too low for typing. We identified EV-D68 in 2 (33%) of 6 fecal specimens. We performed molecular characterization of EV-D68 strains based on phylogenetic analyses of a partial VP1 genomic region (Figure).

AFM has been associated with different etiologic agents (1). EV-D68 is a nonpolio enterovirus characterized by affinity for α2–6-linked sialic acids typically found in the upper respiratory tract, making the respiratory tract the preferred target for EV-D68 replication, unlike most enteroviruses, which replicate in the gut (1,4). Although there is no definitive evidence of causality between EV-D68 and AFM, since the 2014 EV-D68 respiratory outbreak in North America, AFM cases possibly associated with EV-D68 have been reported in the United States, Canada, Australia, Norway, Great Britain, and France (1,5). We report a cluster of AFM associated with EV-D68 in Argentina; another institution in Argentina (Hospital Garrahan) has also reported a case series of AFM (6,7).

The cluster in this report occurred over a 3-month period, during the 2016 autumn–winter season, which is the typical enterovirus season in Buenos Aires. Clinical and neurologic findings were similar to those of cases reported in other countries, including URTI preceding the neurologic features (4,8,9). Patients were admitted with asymmetric, acute, and progressive weakness of limbs; areflexia; and muscle pain. These symptoms have been reported as polio-like syndrome; however, testing and MRI should be performed for multiple viruses, including enteroviruses and EV-D68, to detect distinctive spinal cord lesions. No sensory sensitivity involvement was observed. Two patients had cranial nerve dysfunction. Laboratory findings were similar to those previously described, including CSF abnormalities (1,4,8).

Different hypotheses to explain difficulties in isolation of EV-D68 have been reported (4). It is possible that most of the nasopharyngeal specimens in previous studies and in our cluster were taken after 7 days of URTI, when the viral load is usually low, as reported by Imamura et al. (10). In our case series, enterovirus was identified in respiratory secretions in 5 (83.3%) of 6 patients, even though specimen collection was performed >7 days (mean 9 days) after AFM onset (in 1 patient, viral load was too low for genotyping). The negative nasopharyngeal specimen was collected at 18 days after onset.

Isolation of EV-D68 in fecal samples is uncommon because the virus is both heat and acid labile (1). However, in 2 (33.3%) of our 6 patients, EV-D68 was identified in fecal samples.

Reported rates of CSF detection of known neurotropic enteroviruses, such as polioviruses and enterovirus A71, are as low as 0%–5%, although viruses could be detected in brain or spinal cord tissue (4,11). A recent mouse model of AFM caused by EV-D68 showed that EV-D68 infects anterior horn motor neurons, resulting in motor neuron death (9). In our series, CSF samples tested negative for EV-D68 and other pathogens.

No specific treatment for EV-D68 AFM is available; the US Centers for Disease Control and Prevention recommends only support measures (7,12). Zhang et al. demonstrated that commercial immunoglobulin contained high levels of neutralizing antibodies against EV-D68 strains during the 2014 outbreak in the United States (13). No vaccines are available.

EV-D68 belonging to subclade B3 was identified in our cluster by molecular sequencing. This subclade was associated with EV-D68 circulation in the United States and Europe in 2016 (14).

We show a cluster of AFM associated with EV-D68 in Argentina. Our findings contribute to global evidence of EV-D68 as a possible cause of localized polio-like illness.