We report a case of malignant otitis externa with jugular vein thrombosis caused by Aspergillus flavus. Magnetic resonance imaging revealed an unusual ink smudge pattern deep in a cervical abscess. The pattern was consistent with mycetoma and may be important for diagnosing these life-threatening infections.

A 73-year-old male patient sought care from the otorhinolaryngology department at University Hospital, Marseille, France. He had a 5-month history of malignant otitis externa (MOE), which was worsening despite 4 months of treatment with intravenous ceftazidime, oral ciprofloxacin, and topical neomycin, polymyxin B, dexamethasone, and thiomersal combination. The patient had a history of high blood pressure, treated with perindopril and nicardipine, and diabetes mellitus, inadequately controlled (hemoglobin A1c 7.7%) with metformin and sitagliptin. 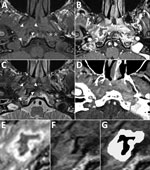 Jugular vein thrombosis (JVT) was previously reported in MOE (5) and other conditions such as Lemierre syndrome, invasive fungal infection, or any inflammatory process including otitis media. Various pathogens can cause JVT, especially Fusobacterium necrophorum and zygomycetes. Data on JVT in MOE are scarce; we could find no previously reported case of JVT related to A. flavus MOE. Postcontrast CT with soft tissue algorithm is considered the first-line imaging modality to diagnose JVT (5). In our case, both CT and MRI confirmed the diagnosis.

Osteomyelitis and abscess showed on MRI but were hardly visible on CT (Appendix Figure). High-signal T2-weighted imaging is typical in purulent content of abscesses (6). In contrast, this case exhibited an unusual lack of T2-weighted imaging signal. This characteristic pattern is known in various mycetoma locations as paranasal fungus balls (7) or maduromycosis, for which the T2-weighted imaging dot-in-circle sign is specific (8). Most authors explain the signal void as a magnetic susceptibility behavior on T2-weighted imaging resulting from accumulation of iron and other magnetic atoms (9). This case introduced a new T2-weighted imaging signal void pattern we refer to as an “ink smudge” appearance. A bone sequestrum is a differential diagnosis, yet this lesion lacked calcification in CT. We hypothesize that the ink-smudge sign we identified could be specific to fungal infection. This report should prompt careful assessment by MRI of deep-space abscess in patients with MOE.

The standard treatment for fungal MOE is a combination of surgical debridement, systemic antifungal therapy, and control of concurrent conditions. There is no consensus for the duration of the antifungal treatment; patients usually receive 6–8 of weeks antifungal therapy, more if clinical examination or imaging follow-up supports extending treatment (10).

We highlight the potential use of an MRI ink-smudge pattern to identify fungal infection in MOE. Furthermore, because we saw JVT on both postcontrast CT and MRI scans, our findings and these images may be crucial for improving patient prognosis through timely and adequate treatment.

Dr. Moniot is a resident at the University Hospital Institute Méditerranée Infection, Marseille, France. His research interests include identification and diagnosis of fungal pathogens and investigation of fungal epidemiology.