We retrieved Nipah virus (NiV) sequences from 4 human and 3 fruit bat (Pteropus medius) samples from a 2018 outbreak in Kerala, India. Phylogenetic analysis demonstrated that NiV from humans was 96.15% similar to a Bangladesh strain but 99.7%–100% similar to virus from Pteropus spp. bats, indicating bats were the source of the outbreak.

Nipah virus (NiV) was first reported from Malaysia in 1999 (1). Additional NiV outbreaks have occurred in Bangladesh (2–4) and India (5,6). NiV is a negative-sense enveloped RNA encoding for 6 genes (nucleocapsid, phosphoprotein, matrix, fusion protein, glycoprotein, and polymerase) (7,8). Two NiV clades have been proposed: B genotype, predominantly found circulating in Bangladesh, and M genotype in Malaysia and Cambodia (9). NiV-positive fruit bats (Pteropus medius) were found in West Bengal, Assam, and Haryana states in India, posing a possible source of NiV infection in humans (10–12).

In May 2018, the Indian Council of Medical Research–National Institute of Virology (ICMR-NIV; Pune, India) received clinical specimens (throat swab, urine, and serum) from 3 persons from Kozhikode district, Kerala state, who were suspected to have NiV infection. Their clinical signs and symptoms were moderate to high-grade fever, headache, vomiting, myalgia, cough, and rapidly progressing breathlessness. Neurologic symptoms included altered sensorium and seizures. Details of the index case-patient and all secondary case-patients have been described (13).

We attempted to isolate virus from 26 specimens from 9 Nipah-confirmed case-patients and 1 NiV-negative patient by processing throat swab, lung tissue, urine, and serum specimens in the Biosafety Level 4 laboratory of ICMR-NIV, as described previously (14) (Table 1). We inoculated 100 μL of each sample into a 24-well culture plate of Vero (ATCC, CCL-81) cells in 1 ml of Eagle minimal essential growth medium containing 10% fetal calf serum in each well. The culture plate was incubated at 37°C with 5% CO2. All culture fluid was passaged 4 times, irrespective of showing cytopathic effect. We adjusted urine sample pH to 7.4 using 1N sodium hydroxide before proceeding to virus isolation.

To determine the possible role of bats in NiV transmission in this outbreak, we captured bats from the area near the index case-patient’s house using specialized nets, 21–30 days after illness onset in the index case-patient. Two species of bats, the fruit bat (Pteropus medius; n = 52) and Leschenault’s rousette (Rousettus leschenaulti; n = 12), as well as 5 birds, were trapped. We euthanized, then collected rectal and throat swab specimens in the field, then transported these animals in a liquid nitrogen transport container to ICMR-NIV. The animals were dissected in the containment laboratory, and organs (lung, spleen/liver, kidney, intestine, brain) were collected. All specimens were tested by quantitative and nested RT-PCR.

We conducted next-generation sequencing (NGS) for each positive sample with a minimum volume of 250 μL, if available. We followed a library preparation method as described previously (15) and analyzed the paired-end reads from Illumina Miniseq (Illumina, https://www.illumina.com) using CLC Genomics Workbench software (QIAGEN, https://www.qiagen.com). We performed reference-based mapping to retrieve the NiV genome. 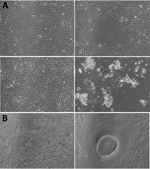 Figure 1. Cytopathic effect (CPE) of Nipah virus from throat swab samples of a patient in Kerala, India, 2018. Virus was inoculated into Vero CCL81 cells. A) CPE at postinfection days 1 (top)...

Only 1 throat swab sample (MCL-18-H-1088) inoculated in Vero CCL81 cells showed significant cellular morphologic changes, beginning at 8 h into 1 day postinfection (dpi) of passage 2 (Figure 1). We observed cell fusion and syncytial formation, and the frequency of the giant multinucleated cells increased as infection progressed. At 48 h, cells with dendritic-like projections appeared, and at 64 h, extensive cell damage occurred, and cells were detached. There was no obvious cell lysis, but we observed apoptosis such as nuclear invagination and membrane blebbing. The NiV isolate (MH523642) obtained showed a cycle threshold of 15.

Throat and rectal swab specimens from 13 (25%) Pteropus sp. bats were positive for NiV; cycle threshold ranged from 28 to 37. Of these positive bats, liver, spleen, or both of 3 bats was also NiV positive (product size 342 bp) by nested RT-PCR for partial nucleocapsid (N) gene. The product was sequenced and compared with Kerala human NiV sequences.

Figure 2. Maximum-likelihood phylogenetic tree of the nucleocapsid gene (region 1293–1608) of Nipah virus from Kerala, India, 2018, and reference sequences. A) Complete coding region. The evolution distance for 17 complete sequences was...

We compared the retrieved genome sequence with the sequences available in GenBank and generated a maximum-likelihood tree using the Tamura-Nei model on the complete coding region and a 316-nt region of the nucleocapsid region (Figure 2). Kerala NiV sequences from humans and bats clustered with the B clade, circulating in Bangladesh. The Nadia NiV sequence (GenBank accession no. FJ513078.1) showed higher similarity to and clustering with the Bangladesh viruses. However, the bat N gene sequences matched more closely with human sequences from Kerala than with others; Kerala human NiV sequences were 99.7%–100.0% homologous with the bat NiV sequences. The complete NiV genome of the Kerala strain had 85.14%–96.15% similarity with M and B NiV genotype. Despite having 96.15% similarity to the Bangladesh strain, Kerala NiV strain forms a separate cluster (Table 2; Appendix Table).

In this outbreak, NGS helped identify the circulating NiV in Kerala as B genotype. We found the highest similarity between human NiV complete sequences from Kerala and NiV N gene sequences from Pteropus spp. fruit bats (99.7%–100%), compared with NiV sequences reported from Malaysia, Cambodia, and Bangladesh (85.14%–96.15%). This finding indicates that Pteropus spp. bats were most likely the source for human infection in this outbreak.

Distinct clustering of Kerala sequences suggests that this strain may be circulating locally in bats and some evolution might exist that differentiates it from the northern Bangladesh/West Bengal strain. It may also suggest that the colony of bats sampled in this outbreak had active infection, but additional epidemiologic studies in bats may be needed to support this. Freeze–thawing of organs, lack of collection of fresh tissue samples in the field, or preserving tissues in virus transport medium might be the reasons for failure to retrieve the complete genome from bats.

Because of the lack of effective specific treatment or preventive vaccines for NiV infection, emphasis should be placed on containment of this virus. Strict isolation; biorisk mitigation; and hospital infection control policies, including the explicit use of personal protective equipment as a part of risk mitigation by healthcare workers, needs to be strengthened. Effective close contact and suspected NiV case surveillance will help in early diagnosis and isolation, thereby preventing secondary transmission (4).

Ingestion of fruit coming in contact with the saliva of bats or inhalation of tiny droplets produced from the infected urine or saliva of the bats residing at the tops of trees can be an important mode of transmission of NiV to humans. Even though the route of infection of the index case-patient in this outbreak was unknown, further investigation is needed to determine how contaminated fruit can be a route of NiV transmission. High positivity in bats shows the epizootic of NiV infection. Health education and community awareness are needed to break the chain of NiV transmission.

Financial support was provided by intramural funding of the ICMR-NIV.