Fox-derived Sarcoptes scabiei mites caused an outbreak of mange on a farm in Switzerland in 2018. Pruritic skin lesions suggestive of S. scabiei mite infestation developed in 4 humans who had direct contact with affected farm animals but not foxes. Sarcoptic mange is continuously spreading; such outbreaks affecting humans could start occurring more frequently.

The Sarcoptes scabiei mite is the causative agent of scabies in humans and sarcoptic mange in animals (1). Scabies is considered a neglected reemerging disease of public health concern (2). Sarcoptic mange causes distress in livestock, economic loss in the livestock industry, and disease and death in wildlife (3). The degrees of host specificity and cross-infectivity of S. scabiei mites are still debated (3). 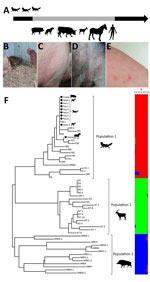 In January 2018, sarcoptic mange was suspected on a farm in the Jura Mountains, Switzerland. The outdoor loose housing system of this farm hosting 2 oxen (Bos taurus), 2 horses (Equus caballus), 5 goats (Capra hircus), 4 alpacas (Vicugna pacos), 8 fallow deer (Dama dama), and 15 sheep (Ovis aries) was separated from a stable housing 3 pigs (Sus scrofa domesticus). Six dogs (Canis lupus familiaris) and 17 cats (Felis catus) had access to all stables. Pruritic skin lesions developed in several species 2–3 weeks after repeated episodes of mangy red foxes (Vulpes vulpes) sleeping in the stables and making partial body contact with the livestock (Figure, panels A, B). Pruritic skin lesions also developed in 4 persons who had direct contact with the domestic animals but not the foxes. A fox with mange was found dead nearby and a necropsy was performed. Oxen, dogs, and pigs were treated with avermectins before diagnostic investigations were carried out.

Clinical examination revealed papules, erythema, excoriations, hyperkeratosis, and hypotrichosis with variable severity in 2 pigs, 2 goats, 2 dogs, all horses, and all oxen (Figure, panels C, D). The 3 sheep and 1 cat examined did not have lesions suggestive of mange. Close examination of the fallow deer and alpacas was impracticable. Humans had pruritic erythematous papules and excoriations on their neck, legs, or arms (Figure, panel E). Health authorities temporarily prohibited 1 affected person (a teenager) from attending school because of suspected scabies. Pruritus and skin lesions disappeared in the affected animals and humans within 6 weeks after >2 treatments with avermectins, topical neem oil, or both.

We identified S. scabiei mites by light microscopy in the skin scrapings from 2 pigs, 1 horse, 1 ox, 1 goat, and 1 fox but none of the scrapings from 3 sheep, 5 dogs, and 1 cat sampled. A few mites but no eggs, eggshells, or gravid females were observed on livestock, whereas all stages were present and numerous on the fox. Skin scrapings were not obtained from the affected humans. We confirmed S. scabiei mite mitochondrial 16S rDNA by TaqMan real-time PCR (4) in the sampled horse, ox, goat, and fox but not in the sampled sheep, cat, dogs, or pigs. Analyses with a panel of 9 microsatellites (sarms 33, 35–38, 40, 41, 44, and 45) (5) confirmed that foxes were the source of the mites (Figure, panel F); the mites on the outbreak farm were similar to each other and to mites previously collected from foxes in Switzerland (6) but different from those collected from wild ungulates in Spain, Switzerland, France, and Italy (5,7,8).

Genetic investigations suggest that multiple S. scabiei mite subpopulations can infect the same host and that mite subpopulations can differ from host to host. Different subpopulations undergo varying degrees of gene flow depending on the geographic distances among infested hosts and cluster in animals that share a taxonomic classification above the species level (1,9). In Europe, wildlife herbivore-, carnivore- and omnivore-derived S. scabiei mites have been described as distinct groups, and intraspecies and interspecies transmission have been proposed to occur among hosts of the same taxon but not among different taxa under natural conditions (8). However, prey-to-predator transmission was demonstrated in Africa (10). Thus, direct contact between affected hosts or fomites and susceptible hosts (1) rather than mite host specificity might determine whether S. scabiei mites are transmitted to different taxonomic groups.

Our investigation unambiguously identified wild carnivore–derived S. scabiei mites as the cause of a point-like outbreak involving different domestic herbivores and omnivores. However, we found no evidence of mite reproduction, which suggests that the mites that transmitted from foxes to other species were not able to actively replicate. Yet, persistence of clinical signs despite treatment and suspected subsequent transmission from domestic animals to humans is not fully consistent with the self-limiting pattern described for zoonotic scabies, although reinfection of domestic animals by other foxes with mange could have occurred.

Increased fox abundance, reemergence, and continuous spread of sarcoptic mange in foxes could lead to its emergence in other wild and domestic animal species. Although mites or their DNA could not be demonstrated in the affected humans, their clinical signs were highly suggestive of scabies, highlighting the zoonotic potential of S. scabiei mites. The propensity of foxes with mange to live close to human settlements, the increase in green farming, and increased density and size of domestic animal populations augment the risk for contacts between foxes, domestic animals, and humans. Therefore, such outbreaks might become more frequent in the future.

Mr. Pisano is a veterinary resident in the Wildlife Population Health specialty of the European College of Zoological Medicine at the Centre for Fish and Wildlife Health, University of Bern, Bern, Switzerland. He has a special interest in infectious diseases in free-ranging wildlife and researches various aspects of sarcoptic mange in Swiss wildlife.

We thank the owners of the animal refuge, Tante Martha, and the game warden, Thierry Studer, for their contributions to sample collection.