We detected Marburg virus genome in Egyptian fruit bats (Rousettus aegyptiacus) captured in Zambia in September 2018. The virus was closely related phylogenetically to the viruses that previously caused Marburg outbreaks in the Democratic Republic of the Congo. This finding demonstrates that Zambia is at risk for Marburg virus disease.

The genus Marburgvirus, like Ebolavirus, belongs to the family Filoviridae and consists of virus species that cause severe hemorrhagic fever in humans and nonhuman primates. Marburgvirus contains 1 species, Marburg Marburgvirus, and 2 viruses, Marburg virus (MARV) and Ravn virus (RAVV) (hereafter referred to as Marburgviruses) (1). Marburg virus disease (MVD) has occurred most frequently in central Africa countries such as Uganda and the Democratic Republic of the Congo (DRC) (2). Sporadic outbreaks including imported cases have also been reported in Angola, Kenya, and South Africa (2).

Because a traveler who had visited Zimbabwe developed MVD in South Africa in 1975 (3), it has been suggested that countries in southern Africa are also at risk for MVD. Indeed, Angola has had the largest MVD outbreak, in 2004–2005 (2). To estimate the risk of MVD in Zambia, which has had no recognized human cases, we conducted an epidemiologic study of infection of Egyptian fruit bats with Marburgviruses in this country since 2014. Previously, we reported a high seroprevalence of Marburgvirus infection (43.8%) in the Egyptian fruit bat population in Zambia (8). Peaks of seroprevalence were repeatedly observed in November to December of each year, strongly suggesting the seasonality of infection in the Egyptian fruit bat colony in Zambia. However, neither infectious Marburgvirus nor its RNA genome had been detected in Egyptian fruit bats as of September 2018 (8).

In 2018, we captured 71 cave-dwelling Egyptian fruit bats in Lusaka Province, Zambia, as part of the research project Molecular and Serological Surveillance of Viral Zoonoses in Zambia (DNPW8/27/1), approved by the Department of National Parks and Wildlife, Ministry of Tourism and Arts of the Republic of Zambia (act no. 14 of 2015). We sampled lung, liver, kidney, spleen, and colon tissues from 22 bats in February and 25 bats in September (Table 1). In November, we collected oral and rectal swab samples from 24 bats. We extracted total RNA from pooled tissue homogenates (lung, liver, kidney, and spleen), colon homogenates, and pooled swab samples, as described previously (8). Subsequently, we tested RNA samples by reverse transcription PCR with panfilovirus nucleoprotein (NP) (9), Marburgvirus NP, viral protein (VP) 35 (6), and RNA-dependent RNA polymerase (L) gene primer sets (10).

We obtained all the expected PCR products from the RNA samples of an Egyptian fruit bat (ZB18-36) captured in September (Table 2). By Sanger sequencing of the PCR products and subsequent BLAST searches (https://blast.ncbi.nlm.nih.gov/Blast.cgi), we confirmed detection of Marburgvirus NP, VP35, and L genes (GenBank accession nos. LC465155–7). We also detected the NP gene in the pooled tissue RNA of another bat (ZB18-55) (GenBank accession no. LC465158) (Table 2). Nucleotide sequences of these genes were highly similar to those of the viruses that caused outbreaks in DRC during 1998–2000. Pairwise comparison of partial NP (560-nt), VP35 (344-nt), and L (292-nt) gene sequences showed 99.1%, 96.8%, and 99.7% identities, respectively, to the respective genes of strain MARV/H.sapiens-tc/COD/2000/25 DRC (GenBank accession no. JX458849). We excluded the possibility of laboratory contamination because the detected sequences were distinct from those of viral RNA or plasmids containing Marburg virus genes used in our laboratory. 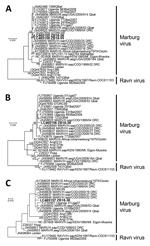 Figure. Phylogenetic trees showing evolutionary relationships of Marburgviruses from Egyptian fruit bats (Rousettus aegyptiacus), Zambia, 2018 (boldface), and reference viruses. The trees were constructed based on nucleotide sequences of 440 nt for...

Subsequently, we phylogenetically compared the NP, VP35, and L genes with representative Marburgvirus sequences available in GenBank. We aligned nucleotide sequences by MUSCLE (https://www.ebi.ac.uk/Tools/msa/muscle) and constructed phylogenetic trees by the maximum-likelihood method with 1,000 bootstrap replicates in MEGA7 (11). The NP, VP35, and L-based trees showed similar topology and clearly demonstrated that the virus in Zambia belonged to the MARV, not the RAVV, lineage (Figure). The virus was closely related to Marburgviruses detected in Egyptian fruit bats in Uganda (5,6), as well as to those that caused human cases in the DRC, but were phylogenetically distinct from the viruses that caused MVD in Angola.

Experimental infection of Egyptian fruit bats with MARV demonstrated that induced virus-specific IgG rapidly declined by 3 months postinfection (12). Considering the serologic peaks in November to December in the Egyptian fruit bat population in Zambia (8), it is reasonable that the virus was detected in September in this study. The prevalence of Marburgvirus infection in the bat colony has probably decreased to an undetectable level as the seroprevalence in the bats increases. Previous studies have suggested that biannual reproduction of Egyptian fruit bats in Uganda provides appropriate conditions for Marburgvirus perpetuation relying on the increased population of susceptible juvenile bats associated with the decline of maternal antibodies (6,13). However, this transmission manner may not be the case for Egyptian fruit bats in southern Africa, as they give birth once a year (7,8,10). Recently, Schuh et al. demonstrated that Marburgvirus was horizontally transmitted from inoculated to contact Egyptian fruit bats even at 7 months postinfection (12), suggesting that the viruses could establish persistent infection in this bat species. Even in humans, long-term viral persistence in immune-privileged sites such as the testes and eyes has occasionally been reported (14). Because 42% of the female bats captured in September (5 of 12 bats) were pregnant, it could still be assumed that seasonal biologic events such as breeding might be a possible trigger for recurrence of Marburgvirus infection in the bat colonies.

We report a potential risk for MVD in Zambia. It is important to clarify whether unrecognized human cases of MVD, including asymptomatic Marburgvirus infection, are present in Zambia. Moreover, further research is needed to elucidate the ecology of Marburgviruses in the entire African region and to estimate potential risks of MVD outbreaks in previously nonendemic countries. In particular, more extensive information is needed on Marburgviruses in the Egyptian fruit bat population, including the genetic diversity of the viruses, the distribution and migratory behavior of the bats, and the seasonal pattern of virus infection prevalence.

Dr. Kajihara is a postdoctoral research associate at the Hokkaido University Research Center for Zoonosis Control. He studies known and uncharacterized viruses in Africa to understand their ecology and pathogenic potential for humans and animals; he is interested primarily in batborne viruses, including filoviruses and paramyxoviruses.

We thank staffs of the Department of National Parks and Wildlife, Ministry of Tourism and Arts, Zambia, and technicians in the School of Veterinary Medicine, the University of Zambia, for assistance in capturing the animals. We also thank K. Barrymore for editing the manuscript.

This work was supported by the Agency for Medical Research and Development and Japan International Cooperation Agency within the framework of the Science and Technology Research Partnership for Sustainable Development (grant no. JP18jm0110019) and the Japan Initiative for Global Research Network on Infectious Diseases (grant no. JP18fm0108008). Funding was provided in part by the Japan Society for the Promotion of Science (KAKENHI) (grant nos. JP16H02627, JP15K18778, JP18K15163).