Lassa fever is endemic to western Africa. Nigeria, Guinea, Sierra Leone, and Liberia regularly have outbreaks of Lassa fever, mostly during the first few months of the year, corresponding to the dry season (January–May), when the Mastomys natalensis rodent reservoir of Lassa fever virus (LASV) has more contact with the human population in rural areas to access food. The epidemic zone of Lassa fever has recently been extended into Benin, and sporadic cases have been documented in Burkina Faso, Mali, Ghana, and Togo.

Côte d’Ivoire appears to be an exception; no Lassa fever cases have been reported in this country. A tourist from Germany traveling through Côte d’Ivoire, Burkina, and Ghana died from Lassa fever upon her return to Germany but it was not possible to determine in which country she contracted the disease (1). In 2013, LASV RNA was identified in M. natalensis rodents captured in northern Côte d’Ivoire, near Korhogo (2). Virus RNA corresponded to the same AV strain of LASV as that isolated from the tourist, suggesting that she might have been infected in Côte d’Ivoire. Seroprevalence among forest workers in western Côte d’Ivoire also suggests that LASV might currently circulate in this country (3). 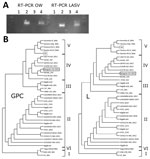 We identified 1 positive serum sample (001/15) by OW RT-PCR; we then determined that this sample was LASV positive by using a LASV-specific RT-PCR specific for the glycoprotein complex (GPC) gene (Figure, panel A). We sequenced amplicons for the GPC and L genes and aligned partial sequences of this new strain, Bangolo-CIV-2015, with the corresponding regions of a set of representative published LASV strains (4).

We generated phylogenetic trees by using a general time reversible plus gamma plus proportion of invariable sites model and parallel maximum-likelihood with PhyML Smart Model Selection (5). The GPC (MK978784) and large RNA (MK978785) fragments of the Bangolo-CIV-2015 strain (Figure, panel B) were genetically similar to strain BA-366 isolated from an M. natalensis rodent captured in the Bantou District of central Guinea during 2003 (6). On the basis of these phylogenetic trees, we concluded that Bangolo-CIV-2015 belongs to the IV clade, along with the highly pathogenic LASV strain Josiah, and diverges from the clade V AV strain of LASV (Figure, panel B) found in rodents and a patient from Germany (1,2).

The LASV-positive serum sample originated from a 30-year-old man from the Bangolo District of Côte d’Ivoire who was admitted to Duékoué Hospital in January 2015 because of fever, asthenia, and gingivorrhagia. His health rapidly deteriorated after admission; he had hypotension and a consciousness disorder and died 4 days later. The sample was collected at the time of death. Further investigations by doctors at Institut Pasteur de Côte d’Ivoire were unable to obtain more information about this patient. Without the travel history of the patient during the 3 weeks preceding his hospital admission, we could not determine whether this case of Lassa fever was endemic or imported. Exported cases are common (7) because many workers travel to Côte d’Ivoire from Guinea and Sierra Leone.

Next-generation sequencing in an outbreak setting, combined with phylogenetic analyses, has recently showed that many strains of LASV have been responsible for cases of Lassa fever in Nigeria, suggesting independent transmission events from the reservoir, rather than the emergence of an epidemic strain (8). The case we report remains isolated because no other suspected cases were reported during this period. None of the healthcare workers who had been in contact with the patient showed any signs of Lassa fever. An additional set of 35 human serum samples collected during October 2014–April 2015 in the Biankouma, Duékoué, Guiglo, Issia, Man, Minignan, Odienne, Soubre, and Tengrela Districts were LASV negative by RT-PCR.

In 2015, Kouadio et al. highlighted possible underreporting of Lassa fever cases in Côte d’Ivoire because of lack of diagnoses (2). We provide evidence of a fatal case of human Lassa fever in the Bangolo District of western Côte d’Ivoire. Thus, measures should be taken to reinforce the diagnosis of Lassa fever and arenavirus surveillance in general in this country. Human serologic surveys should help in identifying the area of LASV circulation in Côte d’Ivoire. RNA from novel arenaviruses has recently been identified in rodents captured in Côte d’Ivoire, but their pathogenic potential for humans remains unknown (9).

We thank the Ministère de la Santé et de l’Hygiène Publique de Côte d’Ivoire and personnel from Duékoué Hospital for providing information about the patient; all members of Département des Virus Epidemiques, Plateforme de Biologie Moléculaire, and Département Technique et Technologie at IPCI and West African Biobank for assistance and support during the visit of M.M. to the IPCI; Ghislain Tiemoko Gueu for technical assistance in managing human samples; N’cho Sonan for helpful discussions; Marc Jouan and Marianne Lucas-Hourani for administrative and logistical assistance; and Frédéric Lemoine for assistance with phylogenetic analyses.