We conducted this study during 2018. Talaromyces isolates from 10 human specimens were submitted to the Microbial Diseases Laboratory (MDL), California Department of Public Health (Richmond, CA, USA), to rule out T. marneffei (Appendix). Temperature and pH are known to influence pigment production and colony morphology of Talaromyces species; therefore, growth characteristics were observed using 2 different culture media (Sabouraud dextrose agar, pH 5.6; and Sabouraud dextrose agar, Emmons, pH 6.9), incubated at 25°C and 30°C. Fungal DNA was extracted using a previously reported method (7). Talaromyces isolates were identified to species level using the internal transcribed spacer (ITS) region, partial β-tubulin gene (BenA), and partial RNA polymerase II largest subunit gene (RPB1) (8). The ITS and partial BenA and RPB1 sequences were used to search for homologies in GenBank and CBS databases (http://www.westerdijkinstitute.nl/collections). Multigene phylogenetic analysis was conducted on the concatenated ITS–BenA–RPB1 nucleotide sequence alignment (Appendix). A blastn search (https://blast.ncbi.nlm.nih.gov/blast) through the GenBank database, pairwise comparison alignment through the CBS database, or both showed 99%–100% homology for ITS, 97%–100% for BenA, and 91%–100% for RPB1 sequences with the best-matched sequences of known Talaromyces species isolates. 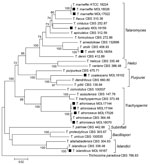 Phylogenetic analysis of the Talaromyces isolates showed 7 genetic clades, consistent with previous descriptions of the Talaromyces genera (9) (Figure). Species identification using a comparison of the ITS, BenA, and RPB1 sequences with existing sequences and multigene phylogenetic analysis identified T. marneffei (isolates MDL17022 and MDL18026), T. atroroseus (MDL17026, MDL17144, MDL17164, and MDL18070), T. islandicus (MDL18167), T. stollii (MDL18054), T. coalescens (MDL18102); and T. australis (MDL18159). The 2 T. marneffei isolates produced diffuse red pigment early, by 3 days of growth, on both medium types and at both incubation temperatures. T. australis and T. stollii isolates also produced red pigment by 3 days but with variations based on media or temperature. At 7 days of growth, the 4 T. atroroseus isolates also showed variable red pigment production (abundant, weak, and absent) (Appendix). Microscopically, most isolates showed biverticillate conidiophores and globose to fusiform conidia in unbranched chains. Both T. marneffei isolates were from HIV-positive patients. MDL17022 was from a blood sample of a 37-year-old man with a travel history to Southeast Asia; MDL18026 was from skin tissue of a 36-year-old man with no available travel history.

Using the combined databases of Filamentous Fungi Library 2.0 (Bruker) and NIH Mold Library, we identified none of the isolates to species level; results showed either no identification or genus-level identification. However, when we expanded the combined database with the MDL Mold Library, we correctly identified all Talaromyces isolates to the species level with the best score >1.9. There were no ambiguous identification results; that is, the second-best matched species also had a high confidence score >1.9.

T. marneffei can be readily differentiated from other red pigment–producing Talaromyces species by yeast-like colony conversion at 37°C. However, many clinical laboratories no longer conduct yeast conversions. For those laboratories, yellow-green colonies producing red soluble pigment at ≈3 days on common fungal culture media at 25°C–30°C might indicate the need to further confirm T. marneffei. It is difficult to distinguish Talaromyces species only by macroscopic and microscopic examination. Multilocus sequencing, although confirmatory, might be too time-consuming and expensive for routine use. Therefore, we identified all Talaromyces isolates to species level by MALDI-TOF mass spectrometry by using an expanded database with well-characterized Talaromyces strains.

In conclusion, our results show that MALDI-TOF mass spectrometry is a good choice for rapid, less expensive primary identification of Talaromyces species and other medically important fungal pathogens. Species-level identification of Talaromyces isolates is clinically useful for treatment of patients with underlying conditions, such as immunodeficiency, cancer, advanced age, and immunosuppressive therapy.

We thank Zenda Berrada for her support and helpful suggestions on this study.

The Microbial Diseases Laboratory at the California Department of Public Health provided funding for this study.