Infectivity of Norovirus GI and GII from Bottled Mineral Water during a Waterborne Outbreak, Spain

Human noroviruses are a major agent of acute gastroenteritis, are distributed worldwide, and affect all age groups (1). One of the largest outbreaks of infection with norovirus, caused by consumption of contaminated bottled spring water, occurred in Spain during 2016 and affected >4,100 persons (2). Multiple genotypes (GI.2, GII.2, GII.4, and GII.17) were identified among patients, and high levels of norovirus genomes were quantified in contaminated water coolers.

Differences in susceptibility to infections with different genotypes have been described and depend on expression of histoblood group antigens (3), for which expression is determined primarily by the FUT2 gene. Although secretor-negative persons are resistant to several norovirus genotypes (3), symptomatic infections in nonsecretors have been documented for GI.3, GII.1, GII.2, GII.3, GII.6, GII.7, GII.4, and GII.17 (3). These differences, which are based on host genetic susceptibility, partially hamper development of dose–response models.

Noroviruses are highly infectious, although infectivity might vary between genotypes, and data on their infectivity are still scarce. Reported doses causing infection in 50% of exposed persons (ID50), determined from volunteer secretor adults challenged with a GI.1 from a stool specimen, range from 18 (95% CI 1–4,350) (4,5) to 2,800 (95% CI, 290–25,000) genome equivalents (6).

In this study, we estimated the 50% illness dose in conditions of natural exposure to contaminated water. These persons were selected from a group of exposed persons during a large waterborne outbreak in Spain in 2016 (2).

This study was conducted in accordance with the Declaration of Helsinki, and approved by the Ethics Committee of the Hospital Universitari Vall d’Hebron (PR[AG]211/2016). Informed written consent was obtained from all persons.

We provided a questionnaire on water consumption, occurrence, type and duration of gastroenteritis symptoms, and blood type (ABO) to 26 persons who had been exposed to drinking water from a water cooler in Spain during 2016. Acute gastroenteritis was defined as vomiting or diarrhea (>3 loose stools within 24 hours) and >2 of the following: nausea, abdominal pain, or fever (temperature >37.8°C). We collected saliva samples to determine secretor status by genotyping the FUT2 gene (9). We collected stool specimens during the symptomatic phase from 13 of 15 symptomatic patients and screened for norovirus by real-time quantitative PCR as described (10). We also performed genotype analysis for polymerase and capsid genes (11) and used probit analysis to determine the 50% illness dose. 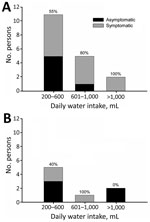 Figure. Distribution of A) secretor and B) nonsecretor persons by level of daily water intake and the occurrence of symptoms during a waterborne outbreak of norovirus, Spain. Numbers at the top of...

Of 8 exposed nonsecretor persons, 3 (38%) showed development of acute gastroenteritis and only GI viruses were detected in their stool. Although we could not completely rule out that GII viruses might have also infected these persons but were not detected, it is plausible that gastroenteritis in these persons was related to the GI infection. Although binding of GI.2 to nonsecretor histoblood group antigens has been demonstrated in vitro (12–14), we report clinical infections in nonsecretors. The observed attack rate for a symptomatic GI infection was similar between secretors (50%) and nonsecretors (38%).

We used data for quantification of norovirus in the contaminated water cooler to which the subjects were exposed (2) to estimate the average 50% illness dose. High levels of genome copies per liter of water for GI (1.1 × 103) and GII (5.8 × 103) had been detected. Intact virions, estimated by using a viability real-time quantitative PCR, represented <4.4% to 5.6% of the total number of genomes. We estimated 50% illness doses according to the percentages of persons with gastroenteritis and the median water volumes recorded for each group (Table 2). We calculated 95% CIs by using the scenarios corresponding to the minimum and maximum water volumes from each group. The 50% illness dose estimates for secretors were 556 (95% CI, 319–957) genome copies/day for GI exposures and 2,934 (95% CI, 1,683–5,044) genome copies/day for GII exposures. For nonsecretors, the number of infected persons was too low to calculate 50% illness doses.

Our data showed differences in infectivity between norovirus GI and GII, which differs from what was previously observed in oyster-related outbreaks (8). Because the number of persons studied was low in both studies, factors that might modify how a particular person responds to virus exposure might partially explain these different observations. In addition, factors related to particular genotypes involved in the outbreaks might also influence infectivity. Although values estimated in this study fall within the range of ID50 and 50% illness dose data obtained by other investigators (4,6,8), we observed that median values extrapolated from oyster-related outbreaks (8) are the lowest values. This trend might be caused by natural variability, different preimmune status of exposed persons, or strain differences, or the proportion of noninfectious genomes with respect to total genome copies might be lower within contaminated oysters.

Because of the interaction of norovirus with specific carbohydrates found in oyster intestinal tissues (15), these animals might specifically bioaccumulate intact infectious virions. In this regard, in our study, after we considered only those genomes incorporated in undamaged capsids, resulting 50% illness doses for secretors were only 25 (95% CI 15–42) for GI and 165 (95% CI 95–284) for GII.

Because the proportion of infectious genomes might vary in each particular environmental scenario, infectivity data for norovirus relating to total and infectious genomes should be consistently investigated whenever possible for a better refinement of risk assessment approaches. Outbreaks caused by consumption of contaminated water and shellfish are often caused by multiple virus strains. Although this factor might hamper infectivity estimates, these types of studies are nevertheless valuable to risk managers and regulators for future formulation of guidelines on acceptance levels for norovirus in specific matrices.

Dr. Guix is an associate professor in the Department of Genetics, Microbiology and Statistics, and academic secretary of the Research Institute of Nutrition and Food Safety, University of Barcelona, Barcelona, Spain. Her research interests are human foodborne enteric viruses, such as norovirus, hepatitis A, and astrovirus; molecular and clinical aspects; and the role of these viruses as food and environmental contaminants; and virus inactivation studies.

Infectivity of Norovirus GI and GII from Bottled Mineral Water during a Waterborne Outbreak, Spain