We isolated 17 viral strains capable of causing cytopathic effects in mammalian cells and death in neonatal mice from sand flies in China. Phylogenetic analysis showed that these strains belonged to the genus Phlebovirus. These findings highlight the need to control this potentially emerging virus to help safeguard public health.

The genus Phlebovirus belongs to the order Bunyavirales, family Phenuiviridae (1). Many phleboviruses are sand fly–borne, including sandfly fever Sicilian virus (SFSV), sandfly fever Naples virus (SFNV), and sandfly fever Toscana virus (TOSV), all of which can cause a febrile condition commonly known as three-day fever (2). At present, sand fly–borne phleboviruses and their associated diseases are found primarily in countries along the Mediterranean coast, including Italy (3), Turkey (4), and Cyprus (5); there have been no reports of sand fly–borne phleboviruses in China or East Asia (2). We describe 17 phlebovirus isolates from sand fly specimens collected in the natural environment of Shanxi Province in central China.

In June 2018, we collected bloodsucking insects during the evening and night (6:00 –7:00 ) in Wuxiang County (112°26¢–113°22¢E, 36°39¢–37°8¢N), Shanxi Province, China, using Wentaitai MM200 traps (Guangzhou Changsheng Chemical Technology Service Co., https://www.globalsources.com/si/AS/Guangzhou-Changsheng/6008849913119/Homepage.htm#). We classified all specimens according to their morphology under ice bath conditions and stored them in liquid nitrogen until laboratory testing (6). We collected a total of 4,069 bloodsucking insects: 3,819 sand flies and 250 mosquitoes. After dividing them into 51 pools (50 mosquitoes or 50–100 sand flies in each pool), we ground insect specimens in minimum essential medium on ice and centrifuged them at 12,000 rpm at 4°C for 30 min. We then processed each homogenate in 2 ways: testing them for the presence of virus with GoTaq Green Master Mix phlebovirus primers (TAKARA, https://www.takarabiomed.com.cn) (7) and inoculating them into baby hamster kidney (BHK) 21 cells and Aedes albopictus C6/36 cells (6). 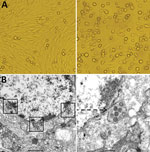 On the third day after inoculation of BHK-21 cells with sand fly specimens, cytopathic effects began to appear (Figure 1). By culturing BHK-21 cells in the presence of supernatant from the sand fly homogenates (Table 1), we obtained 17 viral isolates: 10 strains collected from a sheep pen and 7 from a chicken pen. Pooled supernatants of ground sand flies and viral isolates all showed positive amplification with the phleboviruses primers, and sequencing and analysis revealed that the virus belonged to the genus Phlebovirus. We observed no cytopathic effect or Phlebovirus genes in C6/36 cells. We used PCR to amplify the cytochrome c oxidase I gene (8) and identified Phlebotomus chinensis sand flies as the reservoir for each of the 17 phlebovirus-positive pools.

To further characterize the phleboviruses isolates, we used a plaque assay 3 times to purify virus from Wuxiang County, Shanxi Province (SXWX-1813-2) and then inoculated it into neonatal mice (9), resulting in substantial morbidity and death. The viral titer used in these experiments was 108.09 PFU/mL (4th passage). We observed a large number of virus particles in ultrathin sections of brain tissue of neonatal mice under electron microscopy; the virus particles were uniform spherical particles with diameters of 80–100 nm (Figure 1) (9).

Phylogenetic analysis showed that SXWX1813-2 belongs to the mosquito- and sand fly–borne virus group of the Phlebovirus genus. Further analysis showed that SXWX1813-2 is closely related to viruses isolated from sandflies in Turkey (TORV) and Greece (CFUV), forming independent branches. (Figure 2, panel A). The remaining 16 strains isolated from sandflies were all located on the same evolutionary branch as SXWX1813-2 (Figure 2, panel B; Appendix Figures 1, 2). These results suggested that the 17 viral strains isolated from sand flies in this study were a new phlebovirus, which we have named Wuxiang virus (WUXV), the SXWX1813-2 isolate designated as the representative member.

Our findings indicate that both sand flies and ticks serve as vectors for phleboviruses, including WUXV, in China. In 2011, severe fever with thrombocytopenia syndrome virus, a tickborne virus known to cause fever and hemorrhaging, was reported in China (10). In addition, Guertu virus (11) was isolated from Dermacentor nuttalli ticks collected in Xinjiang, China.

To date, both CFUV (12) and TORV have been isolated from sand flies collected along the Mediterranean coast in Greece and Turkey. Sand fly–borne phleboviruses, including SFSV, SFNV, and TOSV, are all endemic to the Mediterranean region (2). Recently, Drin virus, closely related to CFUV and evolutionarily similar to CFUV and TORV, was isolated in Albania (13). Currently, in the taxonomy of the genus Phlebovirus CFUV is listed as a tentative species and TORV as an unclassified virus (8). Nucleotide- and amino acid–based homology, combined with phylogenetic analysis of phlebovirus genomes, suggests that WUXV is most closely related to TORV and CFUV, with each forming independent branches, indicating that WUXV may be a member of either the Toros-like or Corfu-like viruses.

Ph. chinensis is the dominant sand fly species in China and serves as the primary vector of Leishmania in this country (14). In our study, we isolated 17 strains of a sand fly–borne phlebovirus, WUXV, from Ph. chinensis sand flies, suggesting that the species can also serve as a vector for phleboviruses in China. This finding also suggests the possibility of co-infection with Leishmania and phleboviruses. Our finding of phlebovirus in sand flies in China suggests new challenges for controlling a potentially emerging virus to help safeguard public health.

Jing Wang is a master’s degree student at the Qingdao University (Qingdao) and Chinese Center for Disease Control and Prevention (Beijing), China. Her research interests are arbovirus and its infection.

Page created: June 30, 2020
Page updated: September 17, 2020
Page reviewed: September 17, 2020
The conclusions, findings, and opinions expressed by authors contributing to this journal do not necessarily reflect the official position of the U.S. Department of Health and Human Services, the Public Health Service, the Centers for Disease Control and Prevention, or the authors' affiliated institutions. Use of trade names is for identification only and does not imply endorsement by any of the groups named above.