Hypervirulent Klebsiella pneumoniae as Unexpected Cause of Fatal Outbreak in Captive Marmosets, Brazil

Klebsiella pneumoniae is an opportunistic bacteria that is a normal part of the nasopharyngeal and gastrointestinal tract microbiome of humans and animals (1). The hypermucoviscous variant of K. pneumoniae (hvKp), initially described in Southeast Asia, has emerged as a pathogen affecting young and healthy persons worldwide (2). The development of prominent polysaccharide capsules associated with capsular serotypes K1 or K2 have been reported as the major virulence determinants for human hvKp in liver abscesses, perhaps because it seems to protect the bacteria from phagocytosis and prevents destruction by bactericidal serum factors (2).

Despite the well-recognized zoonotic importance of hvKp and the public health risk of emerging multidrug-resistant strains (7–9), information is incomplete about the genotypic and phenotypic characterization of the etiologic agent essential to adequately diagnose and treat this pathogen in captive and wild nonhuman primates. The aim of this study was to report an epizootic among common marmosets in a wildlife rehabilitation center in Brazil and to describe the serotype, sequence typing, virulence properties, and resistance profile of the K. pneumoniae strains involved.

On February 10–11, 2019, a total of 11 captive marmosets (8 Callithrix penicillata, 2 C. jacchus, and 1 hybrid) died suddenly without clinical signs of disease. All of the animals were maintained in Parque Ecológico do Tietê, located in São Paulo municipality, São Paulo, Brazil, which is a center for receiving, rehabilitating, and referring wildlife. All animals had been in captivity 123–399 days. No new animals had been introduced into the cages in the previous 25 days. Each necropsy was performed <24 h after death in accordance with the Brazil Ministry of Health’s guide for surveillance of epizootics in nonhuman primates (10). Tissue samples were preserved in phosphate-buffered formalin 10% and processed for routine histopathology and for 12 hours in refrigeration for microbiologic and molecular analyses. This study was approved by the Ethics Committee for the Use of Animals (CEUA) of Adolfo Lutz Institute, Brazil (protocol no. 11/2016), SISBIO registration no. 50551 for the manipulation of wildlife material, and SISGEN registration nos. A1A2A72 and A7EB4B6. 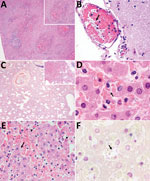 Histologic findings from all of the animals were compatible with hyperacute septicemia. Multiple sections of liver, spleen, and adrenal tissue were similarly affected by suppurative and necrotizing multifocal lesions associated with intrahistiocytic gram-negative bacteria, 1–2-μm long. We also observed numerous intravascular gram-negative bacilli in samples from the liver (10 of 10 samples; the sample from 1 marmoset was excluded because the animal showed severe postmortem autolysis), cerebrum (8/10), lungs (3/10), heart (1/7), intestines (1/7), thymus (1/2), and skeletal muscle (1/1). Other relevant microscopic findings from different tissues are summarized in Table 1 and Figure 1. We found no microscopic alterations in the analyzed fragment samples from the stomach, tongue, testis, thymus, skin, uterus, or lymph nodes.

Pure cultures of K. pneumoniae, positive for the string test (11), were recovered from the brain and liver in 8 different animals. The representative isolate P04 displayed susceptibility to all the antimicrobial agents we evaluated using the broth microdilution methodology with Sensititre plate (Thermo Fisher Scientific, https://www.thermofisher.com), according to the manufacturer’s instructions (Table 2). We screened for K. pneumoniae in environmental samples of water from a lake near the primate cages by filtration and in drag swabs from their cages by direct growth on MacConkey agar plates. Although we recovered K. pneumoniae isolates from both samples, all of them were negative in the string test. We subjected all isolates identified as K. pneumoniae to DNA macro-restriction by using 30 U of XbaI enzyme followed by pulsed-field gel electrophoresis (PFGE) (https://www.cdc.gov/pulsenet/pathogens/pfge.html). PFGE results showed the same restriction profile among the isolates recovered from the dead animals; however, environmental isolates clustered apart from the invasive isolates (Figure 2).

We employed online platforms from PubMLST (https://pubmlst.org) to definitively identify species as K. pneumoniae, sequence type (ST) 86, capsular type K2, and multiple virulence genes: mrkABCDFHIJ cluster (mannose-resistant Klebsiella-like type III fimbriae cluster, associated with adhesiveness and fimbrial filament formation to adhere to eukaryotic cells) (12) in the same contig of the kvgAS genes; iroBCD genes (salmochelin) in the same contig with the rmpA gene (regulator of mucoid phenotype A); and rmpA2 gene within the contig along the iucABD with the iutA genes (aerobactin) (http://bigsdb.pasteur.fr). We detected only the constitutive antimicrobial-resistant genes blaSHV-1, oqxAB, and fosA by the in silico analysis (Comprehensive Antibiotic Resistance Database, https://card.mcmaster.ca). Phylogenetic analysis of high quality single-nucleotide polymorphisms (SNPs) built on the CSI Phylogeny 1.4 (Center for Genomic Epidemiology, https://cge.cbs.dtu.dk/services/CSIPhylogeny) showed that the ST86 isolates were closely related and the P04 strain clustered closely with IPEUC340, an isolate recovered in 1975 in France (Appendix). The isolate RJF293, ST374, clustered apart from the ST86 isolates (Appendix Figure).

To contain the spread of hvKp to other animals, metaphylatic therapy with trimethoprim/sulfamethoxazole was implemented by adding the antimicrobial to the water supply of animals during the first 5 days after the fatal cases were identified. In addition, access to the cages was restricted to a dedicated employee, who wore clothing exclusively for accessing the cages for the duration of the outbreak. We also implemented additional steps for sanitizing fruit eaten by the marmosets with 2% sodium hypochlorite for 15 minutes and dedicated space and staff for preparing the marmosets’ meals after the epizootic event.

We report the detection of hypermucoviscous K. pneumoniae ST86 K2 as cause of a sudden fatal outbreak in captive marmosets. Implementing prompt containment measures led to successful control of this outbreak. The burden of hypermucoviscous K. pneumoniae ST86 K2 in unexpected reservoirs, including those in contact with people, deserves further investigation. The emergence of these strains is a concern for human and veterinary health because of the potential for these bacteria to acquire multidrug-resistant genes, their capacity to persist in the environment and to infect a wide range of hosts, and the unavailability of vaccines against these strains for humans and animals (13). The expansion of this emerging pathogen among different reservoirs should be carefully surveilled, because the relationship between hypervirulent and multidrug-resistant strains is narrowing.

We thank the team of curators of the Institut Pasteur MLST and whole genome MLST databases for curating the data and making them publicly available and all contributors from the Center of Pathology at Adolfo Lutz Institute in São Paulo for routine sample processing.

Dr. Guerra is a veterinary pathologist and scientific researcher at the Center of Pathology at Adolfo Lutz Institute in São Paulo, Brazil. Her research focuses on the comparative pathology of emerging and reemerging infectious diseases in the context of an integrated One Health approach.

Page created: October 13, 2020
Page updated: November 19, 2020
Page reviewed: November 19, 2020
The conclusions, findings, and opinions expressed by authors contributing to this journal do not necessarily reflect the official position of the U.S. Department of Health and Human Services, the Public Health Service, the Centers for Disease Control and Prevention, or the authors' affiliated institutions. Use of trade names is for identification only and does not imply endorsement by any of the groups named above.

Hypervirulent Klebsiella pneumoniae as Unexpected Cause of Fatal Outbreak in Captive Marmosets, Brazil