After the emergence of cholera in 1991 in Peru and reemergence in 1998, both concurrent with El Niño events, the Peruvian National Institute of Health (Lima, Peru) implemented a contingency plan for preparedness to respond to every El Niño episode. This contingency plan involves intensive investigations of all Vibrio isolates acquired in clinical settings and enhanced monitoring of environmental sources. Among the characterized V. parahaemolyticus isolates obtained over the course of surveillance, we identified 5 clinical ST36 isolates (3 in 2015 and 2 in 2016) from Lima (Table). After reviewing the V. parahaemolyticus isolates deposited in the historical collection of the Peruvian National Institute of Health over the past 30 years, we were able to identify 2 additional isolates (1 from a seawater sample collected in 2011 and 1 from a clinic in 2012). 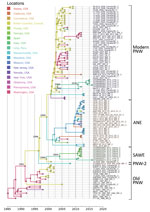 We performed a genomewide phylogenetic analysis of a global collection of 111 ST36 isolates (Appendix Table) obtained during the past 30 years from the United States (west and east coasts), Canada, Spain, and Peru. Results indicated that the isolates from Peru were of 2 different genetic variants (Figures 1, 2): 5 clustered with the modern (i.e., currently circulating) Pacific Northwest lineage, and 2 clustered in a distinctive group comprising isolates from the 2012 outbreak in Spain. Analysis of the phylodynamics of transmission by Bayesian inference suggested the existence of 2 independent and almost contemporary introductions of ST36 into Peru in 2011, both originating from 2 distinct modern Pacific Northwest variants. The group comprising isolates from Peru and Spain appeared to have diverged from a common ancestor around 2004. Considering the number of years from the last common ancestor of both Peru lineages and that other closely related genetic variants are absent from the dataset, intermediary populations might exist in regions not yet scrutinized.

The identification of ST36 in Peru provides additional evidence of the extraordinary dynamics of Vibrio infections in this region. Since the emergence of cholera in 1991 and the subsequent implementation of an active surveillance system for Vibrio diseases in Peru, several instances of emergence of major epidemic clones of V. parahaemolyticus have been reported in the country. Although the sources and routes of introduction of these foreign clones remain yet undetermined, a growing body of evidence has linked the epidemic dynamics and spreading of disease in this particular region of South America to El Niño (13). During the past 30 years, the emergence of cases in Peru associated with new clones of Vibrio has been sharply influenced by the onset of El Niño conditions, which has also shaped the extent and severity of epidemics (14,15). The arrival of extraordinary weather conditions brought on by El Niño (i.e., a combination of heavy rains and heat waves) provides the ideal conditions for the proliferation of Vibrio spp. in the environment. These circumstances, along with disruption of sanitary infrastructure caused by floods and landslides, can help generate the perfect conditions for the explosive emergence of Vibrio diseases.

Despite the evidence connecting the epidemiology of Vibrio in Peru to El Niño, little is known about the mechanisms of global dispersal and introduction of foreign epidemic clones into the region. Ballast water from cargo ships and marine heat waves have been associated with some instances of disease emergence elsewhere (12). Another mechanism that might be involved in the dispersal of V. parahaemolyticus populations is the international trade of shellfish, which was suggested to facilitate the introduction of ST36 into the United States and Spain (12).

We report the transcontinental expansion of ST36 V. parahaemolyticus into South America. The presence of ST36 in clinical and environmental settings in Peru emphasizes the exceptional epidemic potential of the Pacific Northwest complex and V. parahaemolyticus as a human pathogen. The long-term persistence and presence of environmental isolates suggest the successful establishment of ST36 in environmental reservoirs. ST36’s ability for intercontinental dispersal, along with its highly pathogenic nature (1), make this Vibrio population a major public health concern. Furthermore, Peru has shown that implementation of systematic surveillance for Vibrio species can facilitate the detection of emerging transnational epidemic strains. This strategy will play a crucial role under exceptional climatic conditions, such as those generated by El Niño, where enhanced risk for outbreaks is likely.

Dr. Abanto is a scientist at the Scientific and Technological Bioresource Nucleus, Universidad de la Frontera, Temuco, Chile. His research interests include emerging microbes, genomic epidemiology, and the use of integrative and efficient computational methods applied to the study of the epidemiology and ecology of microorganisms.

This work was funded through the Natural Environment Research Council project NE/P004121/1.