We determined prevalence of Rickettsia spp. in 172 ticks of the Amblyomma maculatum group collected from 16 urban sites in Oklahoma City, Oklahoma, USA, during 2017 and 2018. Most ticks (59.3%) were collected from 1 site; 4 (2.3%) were infected with Rickettsia parkeri and 118 (68.6%) with Candidatus Rickettsia andeanae. 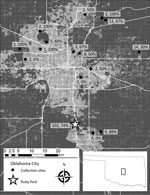 Figure. Locations where ticks of the Amblyomma maculatum group were collected (dots) in Oklahoma City, Oklahoma, USA. Numbers of A. maculatum ticks collected and percentage infected with Candidatus R. andeanae are indicated. Star...

We selected 16 sites as part of a larger study of tickborne disease epidemiology (Figure). We performed collections during May–August by flagging vegetation or using CO2 traps (5). We completed identification by using established keys (6).

We tested field-collected ticks for rickettsial DNA by using established PCR protocols (7,8). To limit DNA contamination, we conducted DNA extractions by using site-specific reagents in a separate laboratory. After soaking adult ticks in deionized water for 30 minutes and surface-sterilizing with 70% ethanol, we longitudinally bisected ticks; we used one half for DNA extraction and stored the other half at −80°C. DNA extraction followed established protocols (5). In 2017, we screened all ticks by using assays targeting the gltA and ompA (8) genes and retested positive samples by using an assay targeting the ompB gene (primer pair 120–2788/120–3599) (7). In 2018, we initially screened ticks by using the gltA assay and confirmed the results with an ompB assay.

Dr. Noden is an associate professor of medical and veterinary entomology in the Department of Entomology and Plant Pathology at Oklahoma State University. His research interests include vectorborne diseases involving ticks, mosquitoes, and fleas.

We would like to thank Dawn Brown, Caitlin Laughlin, Caleb McKinney, and Liam Whiteman for invaluable help with tick collections. We also thank William Nicholson for providing the positive control R. rickettsii DNA.