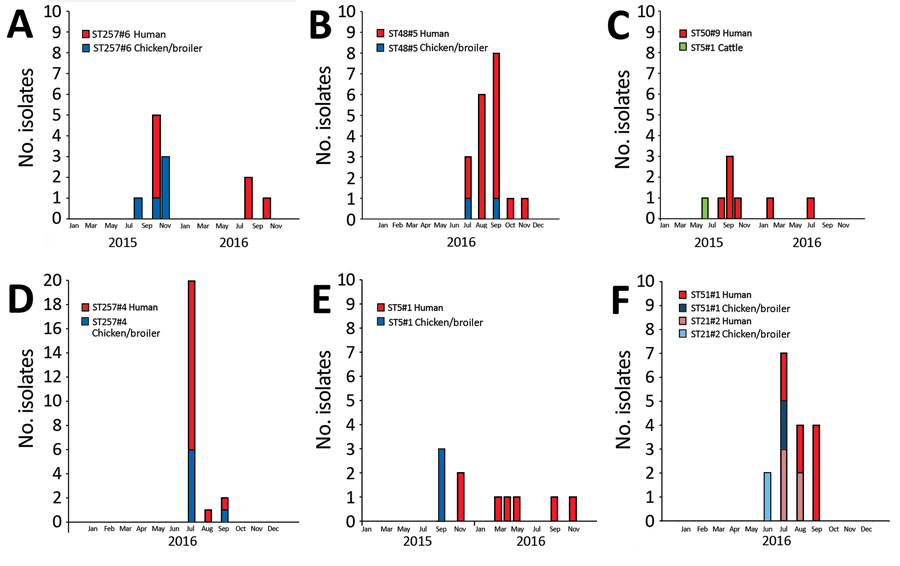 Figure 4. Epidemic curves for 6 large genetic clusters matching clinical Campylobacter jejuni isolates to source isolates, Denmark, 2015–2017. Each example shows the number of isolates (vertical) distributed over time (horizontal). All clusters include isolates that are within 4 allelic differences.  A) Cluster ST257#6, with 7 human cases and 2 peaks detected roughly a year apart. Patient cases primarily originated from 1 region (clinical microbiological laboratory [CML] Hvidovre, n = 6). The 5 domestic chicken/broiler isolates originated from 2 slaughterhouses, and 3 of these originated from different farms. B) ST48#5, the largest of all detected clusters, with 17 human cases, provided by all 4 CMLs. The cluster contained 2 domestic chicken isolates; however, no information about origin (i.e., slaughterhouse or farm) was available. C) ST50#9, the largest cluster detected with cattle as the potential source. A total of 7 domestically acquired clinical isolates were detected from August 2015 through July 2016; isolates were provided by all 4 CMLs. D) ST257#4, the second-largest cluster, comprising isolates from 16 human cases and 7 domestic chicken/broiler isolates, primarily (6/7) from the same slaughterhouse but from different farms, except for 2 isolates that were sampled 2 days apart. Clinical isolates were obtained from all 4 CMLs, primarily from Aalborg (n = 10). Thirteen infections were registered as domestically acquired; 2 patients had traveled and travel status was unknown for 1. E) ST5#1 genetic cluster with 7 patient cases, all domestically acquired; isolates received from 2 CMLs. The 3 domestic chicken/broiler isolates were obtained at the same slaughterhouse over 3 days; however, they originated from 2 farms only ≈20 km apart. F) ST51#1 and ST21#2, the 2 genetic clusters, each contains an isolate from patient A. Separately, the clusters comprise 8 and 5 isolates, respectively; combined, they cover 12 patients with domestically acquired infections representing all 4 CMLs. Of the 4 chicken/broiler isolates (domestic), 2 were obtained at the same slaughterhouse but originated from 2 farms with the same owner. No information was available for the other 2 isolates. ST, sequence type.