New World arenaviruses can cause chronic infection in rodents and hemorrhagic fever in humans. We identified a Sabiá virus–like mammarenavirus in a patient with fatal hemorrhagic fever from São Paulo, Brazil. The virus was detected through virome enrichment and metagenomic next-generation sequencing technology.

Viral infections have become an important public health issue in South America during the past 2 decades. Outbreaks of arboviral disease, such as dengue, chikungunya, Zika, and yellow fever, have increased concern about improving surveillance and diagnosis of viral infections in anticipation of the next threat (1–4). South American arenaviruses belong to the New World serogroups, cause chronic infection in rodents, and have been associated with neurologic symptoms and hemorrhagic fever in humans (5).

We report a fatal case of a new Sabiá virus (SABV)–like mammarenavirus infection in São Paulo, Brazil, in a previously healthy 52-year-old man. On December 30, 2019, he sought care at a basic health facility for odynophagia, epigastric pain radiating to the chest, nausea, vertigo, xerostomy, and myalgia. During the next few days, his signs and symptoms worsened to intense myalgia, fever, drowsiness, and hypotension, so he was referred to the Hospital das Clinicas, Faculdade de Medicina da Universidade de São Paulo (São Paulo, Brazil), on January 6, 2020. At admission, he had bilateral conjunctivitis, diffuse skin rash, cervical lymphadenopathy, and altered mental status. 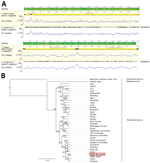 The report of the virome test from the patient’s plasma sample identified the presence of a mammarenavirus, SP2019-01. Further bioinformatics analysis enabled recovery of 2 complete fragments of the viral genome corresponding to the small (S [3,308 bp]) and large (L [7,056 bp]) segments of an arenavirus; NGS average coverage was 117× for the S and 1,146× for the L segment. The S segment had 87% identity and the L segment had 89% identity in a full nucleotide alignment with SABV strain SPH114202 (Figure, panel A). We submitted sequences to GenBank (accession nos. MN956773 [L segment] and MN956774 [S segment]). A maximum-likelihood tree of the species within the Arenaviridae family shows strain SP2019-01 as a SABV-like mammarenavirus based on the alignment of arenavirus complete nucleotide sequences of the L segment (Figure, panel B).

SABV is a New World arenavirus that was previously isolated in São Paulo in 1994 in a patient with fatal hemorrhagic fever (7). Four additional New World arenavirus are known to be associated with human disease in South America: Junin, Machupo, Guanarito, and Chapare (8). Chapare virus is closely related to SABV and has been recently implicated in an outbreak of 5 cases (3 fatal) of hemorrhagic fever in Bolivia (8,9).

Little is known about the natural history of SABV infection. The wild reservoir species for this virus is still unknown but is probably a rodent (10). Three additional SABV cases in humans have been reported since 1994 including 2 in laboratory workers handling SABV samples, raising concern about the potential for aerosol transmission (10).

After the virome test report from this investigation was issued, the laboratory team took all measures to remove biological samples from laboratory routine testing and store them at −80°C. Persons who had any contact with the patient were informed and monitored and did not develop symptoms. Brazil health and surveillance authorities, as well as the US Centers for Disease Control and Prevention, were also informed. Our finding of an SABV-like arenavirus strain causing a fatal human infection in a region with a recent outbreak of yellow fever show the potential role of virome enrichment technique and metagenomic NGS for the etiologic diagnosis and identification of new pathogens in patients with hemorrhagic fever.