We report a case of Argentine hemorrhagic fever diagnosed in a woman in Belgium who traveled from a disease-endemic area. Patient management included supportive care and combination therapy with ribavirin and favipiravir. Of 137 potential contacts, including friends, relatives, and healthcare and laboratory workers, none showed development of clinical symptoms of this disease.

Argentine hemorrhagic fever (AHF) is a severe hemorrhagic fever caused by a New World arenavirus, Junin virus (JUNV), which was discovered in 1958 (1). The virus reservoir consists of rodents found in humid pampas in South America. The endemic area covers 150,000 km2 distributed over 4 provinces in Argentina; ≈5.6 million persons are at risk (2).

Until 1992, the year when a prophylactic vaccine was introduced, annual outbreaks affected mainly male agricultural workers (2). The number of confirmed cases reported annually has decreased from 400–500 before 1992 to 13 cases in 2018 (3).

In January 2020, AHF was diagnosed in a woman in Brussels, Belgium, who had traveled from Argentina to Europe. We report clinical manifestations, management, and public health response for this case.

In early January 2020, a 41-year old woman was admitted to the hospital in Brussels because of lethargy, confusion, and fever. She had been in Argentina and arrived in Amsterdam, the Netherlands, by a connecting flight from Madrid. After 4 days in Amsterdam, she traveled by bus to Brussels.

At admission, her travel partner reported that she had an influenza-like illness (including headache, myalgia, anorexia, and sore throat) since 1 week before admission. The patient had consulted a physician before departure from Argentina. The physician performed a blood sample analysis that showed the following results: hemoglobin 16 g/dL, leukocyte count 3,200 cells/mm3, and platelet count 144,000 cells/mm3. Episodes of vomiting at home were reported during her stay in Amsterdam.

In the emergency department, the patient had a seizure. Physical examination showed no petechia or purpura, but vaginal bleeding was observed. Emergency department laboratory results indicated thrombocytopenia, leukopenia, and severe rhabdomyolysis (Table 1). Results of whole-body computed tomography scan were unremarkable. A lumbar puncture was performed, and results of cerebrospinal fluid analysis were within reference ranges. The patient was admitted to the intensive care unit (ICU), and empirical antimicrobial drug therapy with ceftriaxone was started.

We obtained blood culture, and results became positive the next day for Escherichia coli. Bone marrow aspiration examination was compatible with hemophagocytic lymphohisticytosis. The early stage of the patient’s hospital course was marked by fluctuating fever, ginigival bleeding, and bleeding at the site of the central venous catheter. We managed the seizure by using levetiracetam. At this stage, a diagnosis of AHF was being considered as a possible explanation for the patient’s illness.

On day 3 of hospitalization, we identified the city of origin for the patient as Perez, Argentina, which is located in Santa Fe Province. After consultation with experts from Argentina (C.P. and M.A.M.), AHF was considered as highly possible. Consequently, a confirmatory blood sample was sent to the World Health Organization Collaborating Center for Arbovirus and Hemorrhagic Fever Reference and Research at the Bernhard Nocht Institute for Tropical Medicine in Hamburg, Germany. Treatment with oral ribavirin was initiated because the intravenous form of this drug was not available.

On day 5 of hospitalization, the patient was confirmed to be positive for JUNV by real-time PCR and conventional reverse transcription PCR (RT-PCR) (4). The cycle threshold in the real-time RT-PCR was 18, indicating a high viral load. JUNV infection was confirmed by Sanger sequencing of the amplicons. Intravenous ribavirin was not available immediately but was available the next day. This drug was given orally and then intravenously the next day. The patient had to be intubated because of airway obstruction secondary to tongue hematoma and epistaxis. 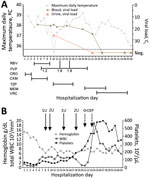 Figure. Biologic and virologic evolution in relation to treatment and supportive care for a patient with Argentine hemorrhagic fever, Belgium, 2020. A) Evolution of maximum daily temperature and blood and urine viral...

The next day, because of its antiviral activity in JUNV infection animal models (5,6) and previous experience with Lassa fever (7), oral favipiravir was given through a nasogastric tube (2,000 mg loading dose, followed by 1,200 mg 2×/d) (Figure, panel A). Hemolytic anemia secondary to ribavirin therapy resulted in its discontinuation on day 9. Because of persistently high viral load, the dose of favipiravir was progressively increased (to 1,800 mg 2×/d) and finally stopped after 14 days.

Throughout her time in the ICU, the patient received broad-spectrum antimicrobial drugs for ventilator-associated pneumonia, voriconazole for probable invasive pulmonary aspergillosis, and filgrastim for persistent neutropenia (Figure, panel B). The patient was successfully extubated on day 23 of hospitalization and discharged from the hospital after 50 days without sequelae.

All residual samples for the patient stored in the laboratory were traced and destroyed. Starting from when the patient first came to our hospital, all healthcare workers who came in contact with the patient used gloves, gowns, and filtering facepiece 2 respiratory masks. Needlestick or sharp injuries were not reported. Starting from day 7 because of signs of bleeding, enhanced personal protective equipment was used in the ICU, including full-body suits and powered air-purifying respirators. Donning and doffing procedures were followed and included observation by another staff member. Body fluids from the patient were gelified and inactivated with peracetic acid. Standard biosecurity measures were applied for laboratory workers until day 4. Afterward, all laboratory investigations were conducted in a Biosafety Level 3 laboratory with enhanced personal protective equipment.

We conducted contact tracing for all healthcare workers who had come in contact with the patient or her samples before the diagnosis of AHF. Public health authorities from the 3 countries in Europe involved conducted contract tracing activities among all potential contacts, including family and friends. In Amsterdam, 2 low-risk contacts were identified among those who had cleaned the apartment in which the patient stayed. According to the European Centre for Disease Prevention and Control Risk Assessment Guidelines for Infectious Diseases Transmitted on Aircraft for viral hemorrhagic fever (7), fellow airline and bus passengers were not considered to be at risk because the patient had not begun to show symptoms of bleeding, vomiting, diarrhea, or urine loss at that time.

We classified contacts as high risk (n = 77) or low risk (n = 60) according to the extent of exposure to body fluids of the patient (Table 2). All contacts were notified by telephone or mail and asked to monitor themselves for fever for 21 days from the day of most recent exposure (upper limit of incubation period). During the surveillance period, 1 high-risk contact became symptomatic (fever) but was ultimately given a diagnosis of infection with influenza A virus. Testing for AHF was not performed. We identified no clinically apparent secondary cases of AHF among the 137 contacts.

This case illustrates the possibility of imported New World arenavirus hemorrhagic fever outside South America. Interruption of vaccine production has been reported in Argentina and if persistent, this interruption could increase the number of persons at risk for contracting the disease (3). This patient was not vaccinated and did not engage in any agricultural activities. The only identifiable at-risk activity was jogging on a dirt road next to her house.

Immune plasma obtained from convalescent-phase patients and containing neutralizing antibody has been shown to decrease the mortality rate from 30% to 1% if initiated within the first 8 days of disease (8). The delay between initial symptomatology and AHF diagnosis (13 days) was considered too long to administer immune plasma to the patient. The National Institute of Human Viral Diseases of Argentina provided us with immune plasma matched to blood group of 3 high-risk contacts identified among the relatives of the patient. Because none of them showed development of illness, immune plasma was ultimately not administered.

Nosocomial transmission of New World arenavirus causing hemorrhagic fever has been reported (9). For this patient, we identified no secondary case among healthcare workers and laboratory personnel, confirming the low infectious risk for infection with JUNV when appropriate biosafety and personal protection measures are taken.

We thank the National Administration of Laboratories and Institutes of Health–Dr. Carlos Malbrán Institute for providing immune plasma; nurses at the intensive care unit of Saint-Pierre University Hospital and members of the infection control team (Stéphanie Francenne, Françoise Antoine, and Salma Flis for providing continuous effort and dedication; laboratory staff at the Laboratoire Hospitalier Universitaire de Bruxelles, Universitair Laboratorium Brussels, and the Bernhard Nocht Institute for Tropical Medicine, particularly Stefanie Ruben, Alexander Schlaphof, Birgit Muntau, and Petra Emmerich for providing contributions to laboratory management of the patient; Andres Mangiarotti, Micaela Paz, Paul Pardon, and the Vaccine Provision and Prevention Service at the National Institute for Public Health and the Environment (Bilthoven, the Netherlands) for providing favipiravir; and all experts consulted worldwide for providing assistance during the study.

Page created: April 09, 2020
Page updated: April 09, 2020
Page reviewed: April 09, 2020
The conclusions, findings, and opinions expressed by authors contributing to this journal do not necessarily reflect the official position of the U.S. Department of Health and Human Services, the Public Health Service, the Centers for Disease Control and Prevention, or the authors' affiliated institutions. Use of trade names is for identification only and does not imply endorsement by any of the groups named above.