Toxin-producing Corynebacterium ulcerans, a causative agent of diphtheria in humans, was isolated from 53 hedgehogs in Belgium during the spring of 2020. Isolates showed low levels of acquired antimicrobial drug resistance. Strain diversity suggests emergence from an endemic situation. These findings stress the need for raising public awareness and improved wildlife disease surveillance.

Hedgehogs across northern Belgium are currently being affected by an ulcerative skin disease. The purpose of this study was to identify the cause of these skin lesions.

Figure 1. Toxigenic Corynebacterium ulcerans as cause of widespread disease in hedgehogs (Erinaceus europaeus), Flanders, Belgium. A) Locations of 81 hedgehogs with lesions on the head or limbs...

During May and June 2020, we tested 81 hedgehogs (Erinaceus europaeus) that had ulcerative skin lesions and were provided by the public to 4 animal rescue centers across northern Belgium (Figure 1). Cases derived from 3 provinces in Flanders (East Flanders, Antwerp, and Limburg); total surface area of these provinces is 8,310 km2. All hedgehogs were individually housed, and we conducted sampling after euthanasia or natural death. We obtained 60 Corynebacterium ulcerans isolates from ulcers or abscesses on the head or limbs from 53 of 81 investigated hedgehogs; all were adult males. For 6 animals, we obtained >1 isolate from different lesions.

Although C. ulcerans was isolated most often, lesions yielded abundant, polybacterial growth (Table 1). We showed by systematic postmortem examinations that 9 animals had a good body condition generally but had multiple cutaneous ulcers on the head and limbs. Histopathologic analysis of skin of these animals showed subacute, extensive, ulcerative dermatitis and suppurative exudation and crusting. Inflammation sometimes extended to the subcutis and even to underlying skeletal muscles.

In some instances, we observed nodular inflammation consisting of central necrosis admixed with degenerated neutrophils and bordered by a small rim of macrophages (abscess formation) and fistulation. We observed intralesional microcolonies of gram-positive bacilli. We subjected organs that showed macroscopic abnormalities to histopathologic analysis. Four animals had interstitial pneumonia, 1 animal had ascending hepatitis, and 1 animal had fibrinosuppurative epicarditis and intralesional gram-positive bacteria.

Despite presence of parasites related to skin disease (fly maggots; myiasis, n = 5; Sarcoptes scabiei, n = 1; and Caparinia spp., (n = 1) and pathogens related to systemic disease (herpesvirus, n = 2 [3] and lungworms; Crenosoma striatum, n = 2), we found no consistent evidence for other causes of primary disease. Although evidence is insufficient to conclusively attribute the observed lesions to C. ulcerans, its widespread and high-level occurrence in diseased male hedgehogs is a serious concern, given frequent exposure of humans to hedgehogs and because C. ulcerans is the predominant cause of human diphtheria in many countries in Europe (4). 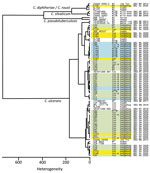 C. ulcerans isolates from hedgehogs belong to several clusters. We identified 56 isolates of C. ulcerans to the species level by using matrix-assisted laser desorption/ionization time-of-flight mass spectrometry (5) and sequencing of the rpoB gene (6). We also typed isolates by analysis of infrared spectra (7). Isolates grouped with C. ulcerans strains from humans and other animals (hedgehogs and red foxes [Vulpes vulpes] from Germany) (1) and clustered in 3 sublineages (Figure 2). The high diversity is similar to that reported by Berger et al. (1), and results argue against nocosomial infections and emergence and spread of a single C. ulcerans clone in the hedgehog population in Flanders. Instead, the high diversity of the isolates suggests C. ulcerans endemicity in the hedgehog population.

Most C. ulcerans isolates from hedgehogs produce toxins. We evaluated presence and expression of toxins by detection of the diphtheria toxin gene (toxE) by using a duplex PCR (6) and the Elek test (11). Results showed a positive result for this gene in 50/56 isolates by PCR and positive (26/56 isolates) or weak positive (16/56 isolates) results by Elek test. One animal was positive for the toxE gene in 1 location (C. ulcerans isolate from a head lesion) and negative for the gene in another location (isolate from a foot lesion).

Although diphtheria vaccination coverage in humans is high in Belgium, since 2010, sporadic cases (14 cases during 2010–2017) of infection by toxigenic corynebacteria have occurred (6). Because presence of the toxE gene and toxin production are associated with pathogenicity in humans, these results suggest a zoonotic potential of most hedgehog-derived C. ulcerans isolates.

Hedgehogs are mammals that are abundant in Europe and are frequently observed in nature reserves and urbanized areas. Because of their defensive behavior, sick animals are easily brought to animal rescue centers by the public, as testified by the large number of animals we examined in a short time frame during this study. The nature of their spiny defense promotes breaching and inoculating of the human epidermis with bacteria during handling. Other potential routes of transmission might include bite wounds or contact with the contaminated environment of the hedgehogs. Several potentially zoonotic or anthroponotic bacterial species, including C. rouxii and Streptococcus pyogenes, are associated with ulcerative lesions in diseased hedgehogs (Table 1).

Although Gower et al. (12) showed that the major risk factor for C. ulcerans infection in humans is exposure to domestic animals (e.g., dogs, cats), widespread occurrence of toxigenic C. ulcerans in most diseased hedgehogs across Flanders should prompt authorities to alert all stakeholders, including members of the public and staff at animal rescue centers, to take precautionary measures when handling hedgehogs. Although vaccination against C. diphtheriae protects against C. ulcerans disease, exposure to C. ulcerans from susceptible persons might result in severe disease (12). Recommendations should include wearing protective gloves and cleaning and disinfecting hands and fomites after contact with a hedgehog, as well as vaccination of persons who are frequently exposed to hedgehogs.

Treatment of infections with pyogenic coryneform bacteria in animals is challenging, and the 4 rescue centers involved in this study reported poor treatment success. Results of antimicrobial susceptibility testing suggest that this finding is not caused by acquired antimicrobial drug resistance but probably by insufficiently high antimicrobial drug concentrations reaching the C. ulcerans bacteria inside pus. Therefore, debrideing the lesions should be included in any treatment. Euthanasia should be considered for severe cases.

Emergence of C. ulcerans infection in hedgehogs is consistent with an increasing number of reports of C. ulcerans infections in wildlife across Europe and warrants attention across the continent (1,13,14). Reports dating back from the 1950s and the presence of several distantly related clusters of C. ulcerans in this study argue against a recent introduction of this pathogen in wildlife populations in Europe and favors the hypothesis that the observed and previously unreported high numbers of diseased hedgehogs result from pathogen emergence from a disease-endemic state. Although most wild animals affected with C. ulcerans have systemic infections (1), in our study, the manifestations of cutaneous disease dominated.

The finding that only male hedgehogs had this disease and that lesions are found mostly on body parts not covered with spines suggests the C. ulcerans infections might be opportunistic infections of wounds, arising from male-specific behavior during the mating season. Bite wounds are well known to be susceptible to infection with opportunistic pathogens that are part of the oral microbiota (15). Strain typing suggests that hedgehogs are a major reservoir of highly diverse C. ulcerans isolates. Active surveillance should elucidate the magnitude of this reservoir in healthy hedgehogs and the impact on the population level. Until the mechanisms underpinning the observed emergence of this potentially zoonotic wildlife disease from its disease-endemic state can be clarified, persons handling hedgehogs should take precautions to prevent possible transmission of C. ulcerans.

This study was supported by the Agency for Nature and forests of the Flemish government. Matrix-assisted laser desorption/ionization time-of-flight mass spectrometry was supported by the Research Foundation Flanders (FWO-Vlaanderen) as a Hercules project (G0H2516N, AUGE/15/05), Bijzonder Onderzoeksfonds research as a professorial staff mandate to A.M., the Bavarian State Ministry of Health and Care, and the German Federal Ministry of Health through the Robert Koch-Institute (09-47, FKZ 1369-359).

Page created: June 28, 2021
Page updated: September 19, 2021
Page reviewed: September 19, 2021
The conclusions, findings, and opinions expressed by authors contributing to this journal do not necessarily reflect the official position of the U.S. Department of Health and Human Services, the Public Health Service, the Centers for Disease Control and Prevention, or the authors' affiliated institutions. Use of trade names is for identification only and does not imply endorsement by any of the groups named above.