We collected questing Haemaphysalis longicornis ticks from southeastern counties of Pennsylvania, USA. Of 263 ticks tested by PCR for pathogens, 1 adult female was positive for Borrelia burgdorferi sensu stricto, yielding a 0.4% infection rate. Continued monitoring of this invasive tick is essential to determine its public health role.

Borrelia burgdorferi sensu stricto is the causative agent of Lyme disease, the most commonly reported vectorborne disease in North America (1). In Pennsylvania, which is first in the United States in the number of reported Lyme disease cases, the spirochete has been identified in nearly 50% of adult Ixodes scapularis ticks, the primary vector (2). In 2018, Pennsylvania initiated a statewide active surveillance program to monitor tick distribution and density, by county, and tickborne pathogen prevalence. Although focused primarily on collecting and testing Ixodes scapularis ticks, initial surveillance efforts recovered, among other species, Haemaphysalis longicornis (Asian longhorned tick), an exotic species recently detected in North America (3), providing quantitative records of their presence in Pennsylvania public lands (4).

Collection processes were standardized to minimize spatial and temporal bias. We collected questing ticks by dragging a 1 m2 white felt cloth over vegetation and leaf litter for 100–600 m. We examined cloths every 10 m and transferred recovered ticks into vials containing 80% ethanol, which we shipped to a central laboratory where they were stored at −80°C until being identified using morphological keys.

We tested the majority (84%) of collected H. longicornis nymphs and adults for pathogens, then retained the rest as voucher specimens. We prepared DNA extracts from individual H. longicornis tick homogenates on the KingFisher Flex Purification System with the MagMAX CORE Nucleic Acid Purification Kit (ThermoFisher Scientific, https://www.thermofisher.com). We tested each extract for B. burgdorferi sensu stricto, B. mayonii, B. miyamotoi, and Babesia microti using probe-based real-time PCR assays comprising multiple targets for each pathogen (Table). We amplified a segment of the Borrelia dipeptidyl aminopeptidase (PepX) gene using seminested PCR and sequenced it to confirm B. burgdorferi sensu stricto–positive specimens. We followed real-time PCR and PepX amplification protocols published elsewhere (9). We amplified and sequenced a 667-nt fragment of the cytochrome oxidase subunit I (COI) gene using primers LCO1490 and HCO2198 (11) to confirm the tick species of positive specimens. The PCR mixture (25 µL) contained forward and reverse primers at a final concentration of 0.4 µmol and 5 µL of DNA template. Thermocycling conditions followed protocols published elsewhere (11). COI and PepX amplicons were sequenced as described elsewhere (9). 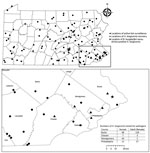 A total of 668 H. longicornis ticks (356 larvae, 166 nymphs, 146 adults) were collected from 4 counties in southeastern Pennsylvania (Figure). During the same period, 265 I. scapularis ticks (174 larvae, 78 nymphs, 13 adults) were collected from the same 4 counties. Of the subset of H. longicornis ticks tested by using real-time PCR (n = 263), 1 (0.4%) adult female collected from a county park in Bucks County on June 14, 2019 was positive for B. burgdorferi sensu stricto. A 570-nt segment of the PepX gene from this specimen was identical to B. burgdorferi sensu stricto reference sequences (GenBank accession nos. CP002312.1:657467–658036). The COI gene fragment from this tick showed 99.8% identity to an H. longicornis tick sequence in the GenBank database (accession no. JQ737090). No H. longicornis ticks were positive for B. miyamotoi, B. mayonii, or B. microti.

On the basis of microscopy, we estimated that ≈10% of the host-seeking H. longicornis ticks that we recovered were partially fed, suggesting the possibility that transmission could occur before the ticks molt. Of note, however, although we detected B. burgdorferi sensu stricto DNA in the tick, we have no evidence to suggest the spirochetes were viable. Unique ecologic traits of H. longicornis ticks (e.g., cold hardiness, parthenogenetic reproduction, host generality), which may enable the species’ rapid establishment and high density (4), could confound efforts to determine the extent to which the tick may be involved in maintenance of B. burgdorferi sensu stricto in nature.

Dr. Price is a microbiologist at the Pennsylvania Department of Environmental Protection, Division of Vector Management, Harrisburg, PA. His research interests include vector ecology and vector-borne disease epidemiology.

Funding for this study was provided, in part, by an epidemiology subgrant (#4100082142) from the Pennsylvania Department of Health.

Page created: December 04, 2020
Page updated: January 24, 2021
Page reviewed: January 24, 2021
The conclusions, findings, and opinions expressed by authors contributing to this journal do not necessarily reflect the official position of the U.S. Department of Health and Human Services, the Public Health Service, the Centers for Disease Control and Prevention, or the authors' affiliated institutions. Use of trade names is for identification only and does not imply endorsement by any of the groups named above.