Dirofilariasis is a group of mosquitoborne parasitoses. The most prevalent Dirofilaria species causing infection are D. imitis and D. repens nematodes (1). Dogs are the definitive hosts in the life cycle, in which microfilaremia is observed. Humans are aberrant hosts, and the worms usually remain infertile (1,2). Human dirofilariasis is reported mostly as 1 worm in the subconjunctival or subcutaneous spaces. Surgical extraction of the worm constitutes definitive therapy. These worms are rarely observed inside the eye (1,2). Identification of the worm by using morphologic features is difficult because a large number of Dirofilaria species have similar features.

Figure. Eosinophilic meningitis and intraocular infection caused by Dirofilariasp. genotype Hongkong in a patient in Kochi, Inida. A) Organism (arrow) in the left eye of patient during routine clinical... 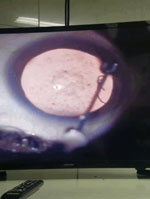 Video. Live, mobile worm in anterior chamber of left eye of the patient. Video was taken while lignocaine was being injected.

A live worm was detected in the anterior chamber of her left eye (Figure, panel A), confirmed by slit lamp examination (Figure, panel B; Video). The lens showed cataractous changes. Indirect ophthalmoscopy showed inflammatory changes in retinal pigment epithelium, suggestive of a migratory tract. Serologic analysis for helminthic antibodies was not conducted because serologic testing was were not available. A white, thread-like worm (length ≈15 mm) was extracted after the worm was paralyzed by injection of lignocaine into the anterior chamber of the eye (Figure, panel C).

Because a PCR was available, histopathologic analysis was not conducted. Morphologic features or sex could not be determined. The worm specimen was subjected to multiplex PCR for D. repens and D. imitis using an equimolar combination of general and species-specific primers: Diro_12S_F (5′-GTTCCAGAATAATCGGCTA-3′), Diro_12S_R (5′-ATTGACGGATGGTTTGTACC-3′), D. immitis_F (5′-TTTTTACTTTTTTGGTAATG-3′), and D. repens_R (5′-AAAAGCAACACAAATAAAA-3′). The cytochrome c oxidase subunit 1 (COX1) region was amplified by using primers Fil_COX1F (5′-GCTTTRTCTTTTTGGKTTACTTTT-3′) and Fil_COX1R (5′-TAGTRTCATAAAAAGAAGTATTAAA-3′) (5).

Although the specimen was identified as a D. repens worm, Sanger sequencing of the COX1 and 12S rDNA PCR products was performed by using the BigDye Terminator v3.1 Cycle Sequencing Kit (Applied Biosystems, https://www.thermofisher.com) and the Genetic Analyzer 3130XL (Applied Biosystems). Sequences of 12S rRNA and COXI genes obtained were deposited in GenBank (accession nos. MT984272 and MT984209).

Phylogenetic analysis of the 12S rRNA (MT984272) and COX1 (MT984209) sequences obtained from the isolate was performed by using the maximum-likelihood method with 1,000 bootstrap replications and MEGA X version 7 (https://www.megasoftware.net). Both the 12S rRNA and the COX1 sequences obtained from the human isolate were in the same cluster with Dirofilaria sp. genotype Hongkong and were separated from other Dirofilaria species (5,6) (Appendix Figure 2). Peripheral blood smears were negative for microfilaria. Symptoms of the patient resolved slowly after worm extraction and initiation of treatment with steroids.

Poppert et al. reported a case of D. repens infection, which was subsequently identified as Dirofilaria sp. genotype Hongkong, which caused subcutaneous infection and concomitant eosinophilic meningoencephalitis in a traveler returning from Kerala, India, and Sri Lanka to Germany (8). Subconjunctival infection with Dirofilaria sp. genotype Hongkong has also been reported in a patient returning to Austria after a 7-week stay in India (9). A recent study from Kerala, India, suggested that most of D. repens infections reported from southern India have the Dirofilaria sp. Hongkong genotype (10).

Sequencing using panfilarial primers might help characterize most filarial species. Such an approach might clarify the etiopathogenesis of eosinophilic meningitis, leading to newer therapeutic and preventive strategies.

Dr. Jyotsna is a resident in pediatric neurology at Amrita Institute of Medical Sciences and Research Centre, Kochi, Kerala, India. Her primary research interest is neurologic manifestations of infectious diseases.

Page created: February 24, 2021
Page updated: April 21, 2021
Page reviewed: April 21, 2021
The conclusions, findings, and opinions expressed by authors contributing to this journal do not necessarily reflect the official position of the U.S. Department of Health and Human Services, the Public Health Service, the Centers for Disease Control and Prevention, or the authors' affiliated institutions. Use of trade names is for identification only and does not imply endorsement by any of the groups named above.