We used a nationwide population registry in South Korea to estimate the effect of a second booster dose of mRNA COVID-19 vaccine on the risk for laboratory-confirmed SARS-CoV-2 infection, critical infection, and death in immunocompromised persons and long-term care facility (LTCF) residents. During February 16–May 7, 2022, among 972,449 eligible persons, 736,439 (75.7%) received a first booster and 236,010 (24.3%) persons received a second booster. Compared with the first booster group, at 30–53 days, the second booster recipients had vaccine effectiveness (VE) against all infections of 22.28% (95% CI 19.35%–25.11%), VE against critical infection of 56.95% (95% CI 29.99%–73.53%), and VE against death of 62.96% (95% CI 34.18%–79.15%). Our findings provide real-world evidence that a second booster dose of mRNA vaccine substantially increases protection against critical infection and death in these high-risk population groups.

Booster doses of mRNA vaccines have been shown to reduce the risk for severe SARS-CoV-2 infection (1,2); however, protection wanes a few months after vaccination, particularly in high-risk populations (3,4). A second booster dose at least 4 months after the first booster dose of mRNA vaccine was found to increase immunity against COVID-19; thus, the second booster has been introduced in some countries (5).

Other studies have postulated that additional doses of the COVID-19 vaccine can enhance cellular and humoral immunity against the Omicron variant (6,7), and some studies have already shown the effectiveness of second boosters in preventing COVID-19 infections (5,8,9). However, population-based studies are needed to assess the effect of the second booster vaccine on COVID-19 in high-risk groups.

During February–April 2022, a second booster of mRNA vaccine was recommended for immunocompromised persons and long-term care facility (LTCF) residents in South Korea. We used a nationwide population registry to estimate the effect of a second booster dose of mRNA vaccine on risk for laboratory-confirmed SARS-CoV-2 infection, critical infection, and death in immunocompromised persons and LTCF residents.

In South Korea, COVID-19 is a notifiable disease; all laboratory-confirmed cases are reported to the Korea Disease Control and Prevention Agency (KDCA). COVID-19 vaccination records, including the date of vaccination and type of vaccine, are also collected and maintained by the KDCA. All suspected COVID-19 case-patients (anyone with a history of close contact with a COVID-19 patient) or SARS-CoV-2–infected persons, regardless of symptoms, were mandated to be tested by PCR or rapid antigen test during the observation period. By linking the vaccination registry and the surveillance database, we created a large-linked database through unique resident registration number. The observation period was February–May 2022, when 100% of SARS-CoV-2 detected in South Korea was identified as an Omicron variant (BA1.1, BA2, and BA2.3 subvariants) (10).

We defined immunocompromised persons as cancer patients, transplant patients, patients with primary immune deficiencies, patients with human immunodeficiency virus infections, and patients receiving high-dose corticosteroids or immunosuppressants. We defined having the first booster vaccine as the third dose of vaccination after receiving 2 doses of the primary series of AstraZeneca vaccine, Pfizer-BioNTech vaccine, or Moderna vaccine and second booster dose as reaching day 14 after receiving the fourth dose of vaccine.

We examined the 3 health outcomes of infection, critical infection, and death during the period of day 0–53. We defined day 0 as the 14th day after receiving the second booster dose. We defined infection as a SARS-CoV-2–positive PCR or rapid antigen test conducted by a healthcare professional in any symptomatic or asymptomatic patient and critical infection as illness in hospitalized SARS-CoV-2–positive patients that necessitated high-flow oxygen therapy, mechanical ventilation, extracorporeal membrane oxygenation, or continuous renal replacement therapy or that resulted in death within 28 days after laboratory confirmation of SARS-CoV-2. Death was death attributable to COVID-19 as diagnosed by physicians.

This study was conducted as a legally mandated public health investigation under the authority of the Korean Infectious Diseases Control and Prevention Act (Nos. 12,444 and 13,392) and was not subject to institutional review board approval; therefore, written informed consent was not required. The investigators shared anonymized clustered data. 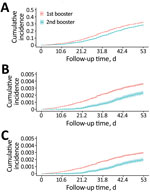 Figure 2. Cumulative incidence of all infections (A), critical infections (B), and death (C) in persons who received a second COVID-19 booster vaccination compared with those who received only the first booster...

Figure 3. Time-varying COVID-19 vaccine effectiveness against all infections (A), critical infections (B), and death (C) in persons who received a second booster vaccination compared with those who received only the first...

In this study that included ≈970,000 persons at high risk, we found that the second booster of mRNA vaccines provided greater protection against critical infection and death in patients with the Omicron variant than the first booster vaccination alone. Our finding is consistent with previous results, including a study among LTCF residents in Sweden during a period of Omicron variant predominance in which the effectiveness of the second booster dose compared with the first booster dose alone was reported to range from 31% to 42% against all-cause death (12). Our relative VE estimates were slightly lower than those in a study from Israel (HR 0.22–0.36), which might reflect declines in VE because the population in our study was a high-risk group consisting of immunocompromised persons and LTCF residents (8). In the general population >60 years of age in Israel, the estimated VE after the second booster dose was 45% against laboratory-confirmed infection, 55% against symptomatic infection, and 75% against death (9). A systematic review found that the seroconversion rates after COVID-19 vaccination were lower in immunocompromised patients, which might explain the difference in VE between populations (13). Despite this factor, our findings indicate that a second booster dose lowered the risk for severe infection in LTCF residents and immunocompromised persons, the most vulnerable population in the community. On the basis of these results, we recommend a second booster dose in at-risk populations to maximize the public benefit of protection against COVID-19 related illness and death.

Our findings also suggest that the second booster dose offers higher levels of protection against critical infection and death in immunocompromised persons and LTCF residents, who are at highest risk for severe COVID-19. A systematic review of 11 studies showed that a third dose of the mRNA vaccine was associated with seroconversion among vaccine nonresponders with malignancies and immune-mediated disorders, which is consistent with our findings (13). The immunogenicity in immunocompromised persons might be lower than that in immunocompetent persons; however, the second booster dose clearly provides additional protection in this population (14). The relatively low VE against all infections seems to be consistent with previous studies that examined VE in LTCFs; however, its effectiveness against severe infection or death was relatively sustained, as observed elsewhere (15,16). During the observation period, we saw no clear evidence of waning against critical infection or death >30 days after the second booster (Appendix). Given the recent introduction of the second booster program in all adults in South Korea, further follow-up is needed to understand how protection changes in both persons at high risk and the general population.

The first limitation of our study is that our results might be affected by confounding bias if the first booster and second booster groups had different diagnostic intensity between groups. However, this difference in behavior that could have caused confounding would be smaller than in the general population, given that the study population included LTCF residents and immunocompromised persons, who receive the highest level of medical attention compared with other populations. Second, we were only able to estimate VE through days 30–53 of follow-up. Thus, the duration of protection against all infections will need to be monitored over a longer duration. Finally, during the peak surge of the Omicron outbreak in South Korea in February, persons who tested SARS-CoV-2–positive by self-administered rapid antigen tests might not have been included in the report. Despite these limitations, the second booster VE estimates against critical infection and death in persons at high risk were >50% compared with those in the first booster group, which suggests that additional doses continue to be an effective strategy to protect health in persons at higher risk.

In conclusion, our study provides real-world evidence that a second booster dose of mRNA COVID-19 vaccine provides substantially increased protection against critical infection and death in LTCF residents and immunocompromised persons receiving the booster dose. This protection will be key in the next wave of SARS-CoV-2 infection, when COVID-19 is again likely to pose a substantial burden to persons at high risk for serious health effects.

Dr. Kim is a public health officer at the Korea Disease Control and Prevention Agency. Her main research interests are epidemiologic investigations and surveillance measures of infectious diseases. Dr. Choe is a clinical associate professor of pediatrics at the Korea University Anam Hospital. His main research addresses quantifying and understanding the mechanisms of the immunization program's impact on public health.

We thank the COVID-19 Vaccination Task Force and Division of National Immunization, Korea Disease Control and Prevention Agency; relevant ministries, including the Ministry of Interior and Safety, Si/Do and Si/Gun/Gu; medical staff in health centers; and medical facilities for their efforts in responding to the COVID-19 outbreak. This study was part of the Korea COvid-19 Vaccine Effectiveness (K-COVE) Initiative.

Page created: September 16, 2022
Page updated: October 21, 2022
Page reviewed: October 21, 2022
The conclusions, findings, and opinions expressed by authors contributing to this journal do not necessarily reflect the official position of the U.S. Department of Health and Human Services, the Public Health Service, the Centers for Disease Control and Prevention, or the authors' affiliated institutions. Use of trade names is for identification only and does not imply endorsement by any of the groups named above.