We collected data on mass mortality in Sandwich terns (Thalasseus sandvicensis) during the 2022 breeding season in the Netherlands. Mortality was associated with at least 2 variants of highly pathogenic avian influenza A(H5N1) virus clade 2.3.4.4b. We report on carcass removal efforts relative to survival in colonies. Mitigation strategies urgently require structured research.

The 2021–2022 epidemic of highly pathogenic avian influenza (HPAI) A(H5N1) virus clade 2.3.4.4b has been unprecedented in terms of numbers of dead wild birds, species affected, spatial extent, and incidence in spring 2022 (1). Across Europe, multiple colony-breeding seabirds experienced HPAI H5N1–associated mass mortalities during the breeding period, including the Sandwich tern (Thalasseus sandvicensis) (1,2). The Netherlands constitutes a major though vulnerable stronghold of the Sandwich tern in Europe; 15,000–20,000 breeding pairs have been documented across ≈10 colonies (https://stats.sovon.nl/stats/soort/6110). We sought to establish the scale of mortality occurring in Sandwich terns breeding in the Netherlands in 2022, characterize the associated HPAI H5N1 viruses and pathology, report on the carcass removal effort relative to survival, and investigate intracolony transmission dynamics.

We determined breeding colony locations and initial sizes in May 2022 through drone or ground counts (3). To establish breeding success and minimum estimates of mortality, we compiled data from late May through early July 2022 on numbers of live adults, chicks, fledglings, and late clutches in colonies, as well as on numbers of carcasses found in and around colonies, carcasses removed for destruction, and abandoned nests (Appendix 1 Table 1). Sandwich terns lay 1–2 eggs and incubate for 21–29 days. Chicks fledge 25–30 days after hatching; annual fledging success is ≈0.5 per breeding pair (4–6). We used wild bird mortality databases to establish minimum estimates of adult mortality outside the colonies. Finally, we used data from the migration tracking website Trektellen (https://www.trektellen.nl) to compare the hourly averages of Sandwich tern passing rates at coastal observation points per week in 2022 to 2016–2021.

We observed clinical signs and tested 44 carcasses for avian influenza virus by using a quantitative PCR to detect the influenza A virus matrix gene; we then followed up with subtype-specific PCRs on cloacal and tracheal swab specimens (7). We performed necropsy with histopathology and immunohistochemistry on 6 of the carcasses to establish cause of death. To study the relationship between viruses detected in Sandwich terns and other bird species, we determined full-genome sequences directly on swab RNA from 20 birds and submitted them to the GISAID database (https://www.gisaid.org), then compared them to a sample of 57 other birds (Appendix 1 Table 2). We aligned sequences by using MAFFT version 7.475 (8), reconstructed phylogeny by using maximum-likelihood analysis with IQ-TREE software version 2.0.3 (9), and visualized the maximum-likelihood tree by using the R package ggtree (10).

To investigate HPAI H5N1 transmission dynamics within a breeding colony, we developed a susceptible-infectious-recovered model that included infection-fatality rate (IFR) and examined outcome as a function of IFR. IFR is the probability that a bird dies after infection, although in this study IFR also includes birds leaving the colony. The model assumed a naive starting population, an infectious period of 5 days, and frequency-dependent transmission and considered only survivors of infection as recovered and total population size as not constant (Appendix 2).

Video 1. Video clip taken while removing dead birds from Colony 6 (Slijkplaat) on June 9, 2022 (9 days after first dead birds were observed in this colony), the Netherlands. Amid the... 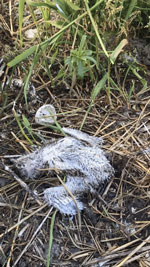 Video 2. Video clip taken in colony 3 (Wagejot) on June 9, 2022 (5 days after the first dead birds were seen in the colony), the Netherlands. Many dead chicks littered the...

Mass mortality was seen in 9 of the 10 Sandwich tern breeding colonies in 2022. In those colonies, out of a total of 18,151 breeding pairs, 8,001 adult Sandwich terns were found dead, and only a few chicks fledged (Video 1; Video 2). Only 1 small inland colony of 137 breeding pairs experienced no mass mortality and had a fledgling success rate (0.47 young/pair) consistent with previous years (0.50 young/pair) (Table; Figure 1, panel A). Outside of colonies, another 1,600 adult Sandwich terns were reported dead between late May and end of June. The scale of mortality is reflected in the passage rate of Sandwich terns along the coast in May–June 2022 (Appendix 2 Figure 4).

Video 3. Webcam sequence of clips from within colony 9 (Waterdunen), June 15, 2022 (10 days after first dead birds were observed in this large colony), the Netherlands. 07:51: Many adults respond...

Diseased birds were debilitated, unable to fly, and mostly lethargic, sometimes with wings spread out. At later stages, some displayed opisthotonos and occasionally flipped over backwards (Video 1, Video 3; Appendix 2 Figures 5–10). We confirmed HPAI H5N1 virus infection in 23 of 24 dead Sandwich terns from colonies (the exception was a chick); infection was also confirmed in 20 of 20 birds outside of colonies (Appendix 2 Table 1). In the 4 necropsied PCR-confirmed adult birds, viral antigen expression was detected by immunohistochemistry in the pancreas (n = 3), duodenum (n = 4), or lung and nasal tissue (n = 1), colocalized with necrosis and inflammation (Appendix 2 Figure 18). Necropsy findings and negative immunohistochemistry results in the 2 chicks we examined demonstrated that chick mortality was at least partly caused by starvation, likely after feeding was interrupted because of adult mortality (Appendix 2). This explanation was supported by field observations (Appendix 2 Figure 19).

Phylogenetic analysis demonstrated that the 20 fully sequenced viruses belonged to H5 clade 2.3.4.4b, and clustered with viruses detected in other wild bird species in the Netherlands, including in geese and gulls collected during January–April 2022 (Figure 1, panel B; Appendix 2). The Sandwich tern viruses clustered in 2 groups. Both variants were found in the northern and southern parts of the Netherlands and were even found within a single colony. These results suggest that at least 2 independent virus introductions into Sandwich terns occurred in the Netherlands, followed by transmission of both virus variants within and between breeding colonies.

Carcass removal effort was diverse (Table; Appendix 1 Table 1). In colonies with some survival, effort was overall more regular, frequent, and immediate or included chicks also, although survival might also have been affected by other undetermined factors.

In most colonies, a high proportion of the birds died or left (Table), indicating high IFR. The model shows that, even with a relatively low value of R0 (R0 = 2), at the higher end of the IFR range evidenced here, few of the birds remaining in the colony will have escaped infection at the end of the outbreak. Birds in the colony will have died or recovered and acquired immunity (Figure 2).

Our results substantiate that after Sandwich terns arrived in the Netherlands for breeding, HPAI H5N1 virus was introduced into their population at least twice. The virus then spread widely within and between breeding colonies, causing outbreaks that resulted in high adult and chick mortality in nearly all colonies. Infected birds probably died of systemic HPAI-associated disease, including acute pancreatic necrosis and duodenitis (11,12). Like other seabirds, Sandwich terns have low annual reproductive output but relatively long life-expectancy (2,4,6,13); therefore the effect of high adult mortality on population size could be seen for a long time. The Sandwich tern exemplifies how severely the continued circulation of HPAI H5N1 viruses in spring 2022 affected populations of colony-breeding birds without flock immunity in Europe (1).

Our study also demonstrates how outbreaks in breeding birds boosted virus propagation into the summer of 2022. The future involvement of Sandwich terns in HPAI endemicity can be evaluated once future population size and flock immunity have been analyzed from count data and serosurveillance. On the basis of our model, colony survivors would be mostly immune to HPAI.

Confirming HPAI as a major mortality factor in breeding colonies of Sandwich terns and other seabird species (2,14,15) underlines the paradigm shift to HPAI as a mortality factor of concern to wild species, in addition to poultry and humans. It stresses the importance of close international cooperation and data exchange to better understand and mitigate the global effect of HPAI on nature. More structured research on appropriate strategies to reduce massive propagation is urgently required. Carcass removal takes away a source of infection but might simultaneously enhance spread of infection and thus requires controlled study.

Dr. Rijks is a postdoctoral researcher at the Dutch Wildlife Health Centre in Utrecht, the Netherlands. Her primary research interests are wildlife diseases and epidemiology. Dr. Leopold is a senior seabird ecologist at Wageningen Marine Research. He has studied Sandwich terns on Texel since 2012.

This work was partly funded by the Dutch Ministry of Agriculture, Nature, and Food Quality (project no. WOT-01-003-012).

Field data were generated and compiled by M.F.L., S.K., R.V., F.S., S.J.L., M.Z.B., L.K., J.W.J., W.C., E.K., R.S., and J.M.R. Virological and phylogenetic analyses were performed by N.B., M.E., and R.A.M.F. Pathology and immunohistochemistry were conducted and analyzed by S.V., M.L.K., A.G., and T.K. The epidemiological model was made by M.C.M.J. The study was coordinated and summarized by J.M.R. and M.F.L. All authors provided input on draft versions and read and agreed to the final version of the manuscript.

Page created: October 21, 2022
Page updated: November 22, 2022
Page reviewed: November 22, 2022
The conclusions, findings, and opinions expressed by authors contributing to this journal do not necessarily reflect the official position of the U.S. Department of Health and Human Services, the Public Health Service, the Centers for Disease Control and Prevention, or the authors' affiliated institutions. Use of trade names is for identification only and does not imply endorsement by any of the groups named above.