We isolated a novel reassortant influenza A(H10N7) virus from a harbor seal in British Columbia, Canada, that died from bronchointerstitial pneumonia. The virus had unique genome constellations involving lineages from North America and Eurasia and polymerase basic 2 segment D701N mutation, associated with adaptation to mammals.

Influenza A viruses (IAVs) are one of the most consequential pathogens of birds and terrestrial mammals. IAVs (family Orthomyxoviridae) are enveloped, segmented, negative-sense, single-stranded RNA viruses, subtyped based on the surface glycoproteins hemagglutinin (H) and neuraminidase (N) embedded in the virus envelope. With the exceptions of H17N10 and H18N11 IAVs in bats, all other existing combinations of H (n = 16) and N (n = 9) subtypes are found in wild aquatic and shore birds, their natural reservoir hosts (1).

Phylogenetically, IAVs can be separated into 2 genetically distinct lineages, Eurasia (EA) and North America (NA), because of the fidelity of migratory waterfowl to distinct flyways (2). However, in areas where migratory flyways overlap, there are, although rare, IAVs with gene segments from both NA and EA lineages. Surveillance studies in Alaska (United States) and Newfoundland (Canada) documented a preponderance of IAVs with whole-genome segments from EA lineage viruses and only rarely, reassortant IAVs with EA and NA gene segment constellations (3,4). In 2014, along the Pacific flyway corridor in Canada and the United States, goose/Guangdong/1/96 (Gs/GD) lineage H5N8 virus was detected in wild waterfowl (5). The Gs/GD virus reassorted with NA lineage IAVs, subsequently resulting in devastating losses among commercial poultry flocks in Canada and the United States.

Wild bird–origin IAVs can breach the host species barrier and cause outbreaks involving several terrestrial mammals. After crossing the species barrier, some IAVs can become established in new hosts and circulate independently of their reservoir hosts. Different species of marine mammals are susceptible to IAV infection through exposure at haul-out sites, where they might comingle with wild birds, infected sympatric marine mammal species, terrestrial wildlife, including mink and river otters, and through direct exposure to infected humans or waterfowl in rehabilitation facilities (6). Previous outbreaks and individual case reports have shown that seals are susceptible to and have died as a result of infection with H10N7, H3N8, H7N7, H4N6, and other IAVs (6).

A live adult male harbor seal weighing 49 kg washed ashore at Combers Beach near Tofino, British Columbia (BC), Canada, but died before he could be captured alive. On June 1, 2021, the seal was brought to the Animal Health Center Laboratory (Abbotsford, BC, Canada) for necropsy. The seal was in moderate body and fair postmortem condition. The most notable findings from gross examination were serosanguinous fluid within the thoracic cavity and focally extensive hemorrhage and edema from the skin to the visceral pleura along the right midlateral aspect of the thorax, with focal visceral to parietal pleural adhesion. Histopathology revealed necrotizing bronchitis and bronchiolitis, peribronchiolar lymphoid hyperplasia, alveolar histiocytosis, and perivascular lymphoplasmacytic cuffing. Immunohistochemistry testing identified IAV viral antigen within the bronchiolar-associated lymphoid tissue of 2 bronchioles in more severely affected areas of the lungs and in situ hybridization confirmed IAV RNA (Figure 1). Aerobic cultures of the lungs, hilar lymph node, brain, intercostal skeletal muscle, and small intestine yielded variable mixed growth of Streptococcus phocae and Serratia liquefaciens with no fungal growth from the lung. PCR testing of pooled tissues proved positive for consensus influenza virus and mollicutes (we confirmed Mycoplasma spp., but were unable to speciate) and negative for canine distemper virus. 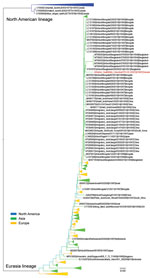 Further analysis of the virus genome revealed that the H10N7 virus carries a glutamic acid (E) residue at the aa 627 site of PB2 determined to be associated with decreased replication in mammal cells using growth kinetics and with decreased virulence in mice using lethal dose challenge (10,11). We also observed an aspartic acid substitution at site aa 701, which has been associated with systemic replication and mortality in mice (11,12). In addition, this residue substitution in guinea pigs conferred efficient replication of the virus in the nose, trachea, and lungs (11). Key amino acid changes were also observed in NP and M segments. The presence of lysine at the aa 319 site in the NP gene segment has been implicated in species adaptation (12) and substitution in the A/seal/Mass/1/1980(H7N7) backbone conferred increased binding to importin alpha1. In the M protein, aspartate at aa 30 and alanine at aa 215 sites also increased virulence as indicated by the decreased postexposure survival rate in mice (13).

In our study of a harbor seal infected with a novel reassortment H10N7 IAV containing a unique constellation of NA and EA lineage gene segments, we found no conclusive evidence of where and when the reassortment occurred. However, the seal was recovered at a location within the Pacific avian flyway, where Gs/GD lineage H5N8 virus was detected in 2014 and later reassorted with NA lineage viruses to create novel reassortant H5N2 and H5N1 IAVs that were responsible for large outbreaks in domestic poultry in Canada and the United States (5). Harbor seals share habitat with seabirds and shorebirds, and the seal in our study may have been infected through spillover directly from infected birds as happened in cases reported elsewhere (6,8). In previous outbreaks in seals, the proximate cause of death was attributed to secondary or opportunistic Mycoplasma spp. (14), which were also detected in this case, or bacterial infection. Finally, because novel IAVs in marine mammals have been shown to be potentially zoonotic (15), IAV circulation among seals could have important public health implications for humans and other mammals.

Dr. Berhane is a virologist with the National Centre for Foreign Animal Disease, Canadian Food Inspection Agency in Winnipeg, Manitoba, Canada, and has appointments with the Department of Animal Science, University of Manitoba, Winnipeg, and Department of Veterinary Pathology, Western College of Veterinary Medicine, University of Saskatchewan, Saskatoon, Saskatchewan, Canada.

This study was supported by the Public Health Agency of Canada and Canadian Food Inspection Agency to support genetic and antigenic monitoring of influenza A virus in animals.

Page created: April 18, 2022
Page updated: June 18, 2022
Page reviewed: June 18, 2022
The conclusions, findings, and opinions expressed by authors contributing to this journal do not necessarily reflect the official position of the U.S. Department of Health and Human Services, the Public Health Service, the Centers for Disease Control and Prevention, or the authors' affiliated institutions. Use of trade names is for identification only and does not imply endorsement by any of the groups named above.