A member of the Arenaviridae family, lymphocytic choriomeningitis virus (LCMV) is an enveloped virus comprised of a bisegmented (large [L] and small [S]), negative-stranded RNA genome encoding 2 polypeptides per segment. First discovered in the 1930s during a study of epidemic encephalitis in St. Louis, Missouri, USA (1), LCMV is presumed now to be localized to all continents (excluding Antarctica) based on the distribution of its primary host, the common house mouse (Mus musculus). In early 2021, a mouse plague started in western New South Wales, Australia, and spread to the adjoining jurisdictions of Queensland, Victoria, and South Australia, causing considerable losses to the Australia agricultural and grain industry. We report a case of acute LCMV infection in a male farmer from New South Wales.

Although LCMV is considered a truly global virus, acute LCMV infection is rarely diagnosed, possibly because most infected, immunocompetent patients have mild, self-limiting symptoms, such as headache, fever, and myalgia, or are completely asymptomatic and thus never seek treatment. In rare instances, patients have onset of aseptic meningitis or meningoencephalitis but usually recover with no sequalae (2). Furthermore, LCMV is not routinely considered as part of a differential diagnosis (outside of a mouse plague), and testing is not widely available. Fatal infections are rare but have been associated with organ transplantation (3). LCMV infection in pregnant women has been associated with pregnancy loss and permanent congenital neurologic malformations and chorioretinitis (4). Sampling and subsequent genomic sequencing occur only sporadically, usually during a marked spillover event from the reservoir rodent host to humans (5).

In early 2021, a 51-year-old male farmer in New South Wales, Australia, sought treatment for headache, neck stiffness, photophobia, and a lower abdominal rash. The patient described a month-long history of arthralgia affecting his low back, left hip, and knee. Serologic and PCR tests were negative for Neisseria meningitidis, Streptococcus pneumoniae, herpes simplex viruses, enterovirus, parechovirus, cytomegalovirus, and varicella zoster virus. Given the patient’s high zoonotic exposure as a cattle and horse farmer and his recent contact with mice, their carcasses, and droppings (all occurring during a concurrent regional mouse plague), we conducted PCR testing for LCMV on a sample of cerebrospinal fluid, which returned a positive result (6). With supportive care, the patient’s symptoms resolved, and he was discharged and remains well. 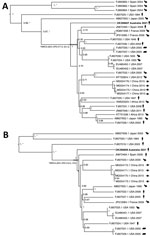 After the patient’s diagnosis, we sought to determine the evolutionary origin of this specimen in a global context. From 50 μL of the patient’s cerebrospinal fluid, we obtained an almost complete genome sequence for both the L and S viral genome segments by using a nontargeted, sequence-independent, single-primer amplification strategy prior to Illumina library preparation (https://www.illumina.com) (7). We estimated a highest clade credibility phylogenetic tree from both S and L (GenBank accession nos. OK356607 and OK356608) gene segments of the LCMV genome (Figure). Our Australia sample was highly divergent (≈75% nucleotide identity) compared with other S and L gene sequences within GenBank. Bayesian molecular dating of the sequence estimated a divergence from the most common recent ancestor in the mid-16th century, with a mean value of 488 years before present (95% highest posterior density 477.9–531.2) for the S segment and a mean value of 443 years (95% highest posterior density 416.2–470.0) for the L segment. Determining the closest relative to our strain is difficult because of a low representation and diversity of complete LCMV genomes worldwide; there is a high bias toward sequences from the United States and China and a gross underrepresentation of strains from Europe.

LCMV may have been introduced to Australia with the arrival of feral rodents brought by the Dutch and Spanish (17th century) or the French and British (18th century) (8). It makes sense, then, that the ancestor of our gene sequences might have been brought to Australia during early European exploration and colonization. This hypothesis can be tested only by monitoring occurrences and gathering more samples of LCMV in rodent populations in both Europe and Australia.

Dr. Caly is a senior medical scientist at the Peter Doherty Institute of Infection and Immunity in Melbourne, Australia. He is currently working toward validating whole-genome sequencing methodologies targeting viral pathogens for implementation into a public health diagnostic service.

Page created: June 30, 2022
Page updated: July 21, 2022
Page reviewed: July 21, 2022
The conclusions, findings, and opinions expressed by authors contributing to this journal do not necessarily reflect the official position of the U.S. Department of Health and Human Services, the Public Health Service, the Centers for Disease Control and Prevention, or the authors' affiliated institutions. Use of trade names is for identification only and does not imply endorsement by any of the groups named above.