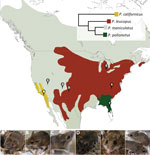 Orthohantaviruses, a genus of enveloped, segmented, negative-sense, single-stranded RNA viruses, are the cause of hantavirus cardiopulmonary syndrome. Hantavirus species are primarily associated and coevolve with specific rodent host species (1,2). In North America, Sin Nombre virus (SNV) causes most confirmed cases of hantavirus cardiopulmonary syndrome (3) and is primarily maintained in Peromyscus maniculatus deer mice (4). P. maniculatus mice are widely distributed in North America (Figure) and are a complex of subspecies that diverge according to geographic location (2,7). Likewise, SNV and its related viruses are found to diverge in association with their rodent reservoirs (1). Although host switching is thought to be uncommon in SNV (1,2), other rodent species sharing a geographic site were recently found to carry the virus, potentially acting as additional reservoirs and sources of human infection (8). We evaluated the permissiveness of 6 colony-bred Peromyscus mouse species, whose founders originated from locations across North America, to infection by SNV originating from New Mexico.

We obtained geographically distinct peromyscine mice (of both sexes and >6 weeks of age) from breeding colonies maintained by the Peromyscus Genomic Stock Center, University of South Carolina (Columbia, SC, USA) (P. maniculatus bairdii prairie deer mouse, P. maniculatus sonoriensis Sonoran deer mouse, P. polionotus subgriseus Oldfield mouse, P. leucopus white-footed or wood mouse, P. californicus insignis California mouse), and the University of Manitoba (Winnipeg, Manitoba, Canada) (P. maniculatus rufinus deer mouse) (Figure) (9). We experimentally infected the mice with SNV strain no. 77734, which had been exclusively passaged in P. maniculatus rufinus mice (both the virus and the host used to propagate it originating from New Mexico) as previously described (9–11). At no point postinoculation did we note any deleterious effects of infection in rodents. We collected tissue samples (lung, heart, spleen, kidney) and either blood (days 7 and 14) or serum (days 21 and 42) samples from mice at 7, 14, 21, and 42 days postinfection (dpi) and evaluated them for the presence of viral (small-segment) RNA (10). We performed ELISA on serum samples, as previously described (12), to assess seroconversion.

Although sex differences have been noted to have little effect on SNV infection in P. maniculatus rufinus mice (10), differences may exist in other rodent species. The numbers in our study are small; however, the data suggest sex-related differences might occur according to species. For example, male P. maniculatus bairdii mice have higher viral RNA titers at 42 dpi, whereas in P. maniculatus sonoriensis mice at 21 dpi, almost all positive animals are female. Meanwhile, P. leucopus mice showed indiscriminate viral RNA detection between sexes across all timepoints (Appendix Figure). Future studies are required to shed light on this aspect.

P. maniculatus mice were established early on as the primary reservoir for SNV (4). However, studies of this virus–host relationship rarely report the host taxon beyond the species level. Moreover, although levels of viral RNA tended to be negligible in the early stages of infection, an observation consistent with previous studies in susceptible animals (9,10,13), the detection of viral RNA at later timepoints probably means members of these species are nonetheless susceptible to SNV infection. That animals were positive at 42 dpi hints at the possibility of persistent infection, although longer-term studies would be needed to confirm.

Antibodies against the SNV nucleoprotein were detected in most serum samples collected from days 21 and 42 from the peromyscine rodents (Table). The lone exception was P. californicus mice, for which only a single animal had detectable SNV antibodies. Rates of seroconversion broadly mirrored the rates of detection by quantitative reverse transcription PCR. The development of antibodies reactive to the SNV nucleoprotein appeared to be delayed in male mice from 2 species (P. maniculatus bairdii and P. maniculatus sonoriensis), and only 1 of 6 of these rodents demonstrated positive serum samples at 21 dpi.

Overall, our data support recent observations from Goodfellow et al. (8) that rodents other than P. maniculatus mice are capable of carrying SNV without showing signs of disease. In that study, wild-caught members of P. boylii mice, Mus musculus mice, and Tamias minimus chipmunks trapped at 2 sites had detectable SNV RNA in their lung tissues. SNV sequences from these rodents were more similar to each other than to previously reported sequences, suggesting circulation of the virus within these rodent populations.

In our study, we experimentally infected 6 Peromyscus mouse species, including 3 that fall under the P. maniculatus species complex, and whose founders originate from locations across North America, with a strain of SNV originating from a single wild-caught animal. Although replicating SNV was detected in animals of all 6 species, permissiveness of each species to SNV infection varied. Susceptibility to SNV infection appears to be multifactorial and is not fully explained by characteristics relating to geographic proximity or genetic relatedness. Given the variability in the patterns of infection between subspecies within P. maniculatus, future studies should consider reporting the subspecies when studying this virus–host relationship. Furthermore, other Peromyscus mouse species may play an important role in the molecular evolution and transmission of SNV. Host-switching events are thought to give rise to SNV variants and even new hantaviral species (1,2,14). That SNV was capable of replicating to high levels in P. leucopus mice for sustained periods is notable. The geographic distributions of P. maniculatus and P. leucopus mice overlap greatly, presenting opportunities for these 2 populations and their respective viruses to come into contact. Together, these regions cover most of North America, including nearly the entirety of the contiguous United States.

These findings demonstrate the importance of broadening our understanding of the SNV–P. maniculatus virus–host relationship and highlight the benefit of identifying infected and infectious rodent reservoirs at the subspecies level to help elucidate epizootics and spillover events to humans. Furthermore, although distinct eastern and western patterns of genetic evolution have been documented in P. maniculatus rodents and associated strains of SNV in North America (1,2), our study suggests that these patterns might not necessarily prevent western lineages of SNV from emerging into eastern populations of peromyscine rodents.

Ms. Quizon is a laboratory biologist at the Public Health Agency of Canada in Winnipeg. Her primary research interests are zoonoses and the development of diagnostic methods for infectious diseases.

We thank Hippokratis Kiaris and Vimala Kaza for assistance with obtaining the mice from the Peromyscus Genetic Stock Center.

This work was funded by the Public Health Agency of Canada.

Animal studies were conducted in accordance with the Canadian Council of Animal Care guidelines and an animal use document approved by the Canadian Science Centre for Human and Animal Health’s institutional animal care and use committee. Work involving infectious SNV was performed in a Biosafety Level 4 laboratory of the Public Health Agency of Canada. When required, materials were inactivated according to approved procedures for subsequent analysis.

All authors declare no conflict of interest.

Page created: August 16, 2022
Page updated: August 19, 2022
Page reviewed: August 19, 2022
The conclusions, findings, and opinions expressed by authors contributing to this journal do not necessarily reflect the official position of the U.S. Department of Health and Human Services, the Public Health Service, the Centers for Disease Control and Prevention, or the authors' affiliated institutions. Use of trade names is for identification only and does not imply endorsement by any of the groups named above.