We assessed serum samples collected in Cauca Department, Colombia, from 486 persons for Orientia seroreactivity. Overall, 13.8% showed reactive IgG by indirect immunofluorescence antibody assay and ELISA. Of those samples, 30% (20/67) were confirmed to be positive by Western blot, showing >1 reactive band to Orientia 56-kD or 47-kD antigens.

Scrub typhus, caused by species in the genus Orientia, is a reemerging mite-borne rickettsiosis and a major cause of acute undifferentiated febrile illness (AUFI) (1). Classically, scrub typhus was believed to be strictly endemic to the so-called tsutsugamushi triangle, which ranges from southeastern Siberia in the North to the Kamchatka Peninsula in the East, northern Australia in the South, and Pakistan in the West (1). However, scrub typhus outside the tsutsugamushi triangle was suggested 70 years ago because seropositivity to O. tsutsugamushi was found among persons from several countries in Africa (1).

In 2006, a confirmed case of scrub typhus outside the classical disease-endemic region was described in a traveler who visited Dubai (United Arab Emirates); the case was caused by a novel species, Candidatus Orientia chuto (2). More recently, in Latin America, autochthonous cases of scrub typhus have been reported in Chile and attributed to a new Orientia species, Candidatus Orientia chiloensis, associated with Herpetacarus spp. mites, which have been recognized as novel vectors of scrub typhus in this newly recognized disease-endemic region (3,4).

In addition to the aforementioned studies in Chile, serologic surveys have been performed among military personnel stationed in the Peruvian Amazon and Honduras, demonstrating exposure to Orientia, as well as a possible role for this bacterium in the etiology of AUFI (5,6). Thus, to explore new geographic regions that might have Orientia circulation, we report serologic evidence of this rickettsial agent in Colombia.

We screened 486 serum samples collected in 4 municipalities in the Cauca Department, Colombia, during 2017 and used in a previous study (7) for Orientia seroreactivity. Cauca Department is located in southwestern Colombia, mainly in the Andean and Pacific regions plus a tiny part in the Amazonian region. The climate is warm and humid on the western slope; warm and semiarid toward the Patía basin; and temperate humid to semihumid centrally, with cold climates recorded on both sides of the Popayán (capital city) Plateau.

We tested for antibodies reactive to O. tsutsugamushi by indirect immunofluorescence antibody (IFA) assay and ELISA (Appendix). To further confirm the specificity of the reactive samples, we performed a Western blot assay (Appendix). 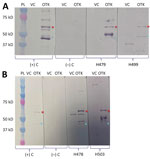 Our results show serologic evidence of Orientia exposure among the rural population of 4 municipalities from Cauca Department, Colombia. This evidence suggested circulation of this rickettsial agent in this region.

Using 2 serologic techniques (IFA and ELISA), we found different seropositivity rates (1% for IFA and 13% for ELISA) for the same serum samples. Similar discordance has been observed for persons from Sao Tome and Principe (8). The difference in seropositivity rates between methods might be caused by the antigens used because our IFA used only antigens of the Karp strain, which could fail to detect antibodies stimulated by organisms of other serotypes and species. Moreover, some autochthonous cases of scrub typhus in Chile have also shown discordant serologic results (reactive IgG by IFA/negative IgG by ELISA, and vice versa) (9,10).

As briefly mentioned, the use of ELISA to detect IgG reactive against Orientia showed reactivity in 5.3% of convalescent-phase serum samples from febrile patients in the region of Iquitos (Peruvian Amazon) (5) and in 5.6% of US military personnel stationed at least 6 months in Honduras (6). Our study found 13% seropositivity by using the same serologic approach (IgG ELISA), which is greater than results obtained in Perú and Honduras. In addition to ELISA and IFA screening methods, we used a confirmatory test (Western blot), which demonstrated reactivity to >1 immunodominant protein (56 kD and 47 kD) of Orientia in 30% of the tested samples, which were positive by >1 screening method.

In conclusion, we report serologic evidence of Orientia in Colombia, supporting that these bacteria are probably widely distributed in Latin America. Our study also supports emerging evidence that Orientia spp. is no longer restricted to the tsutsugamushi triangle. Prospective studies to examine acute-phase and convalescent-phase serum samples and isolation of the agent in those with AUFI in Colombia and other countries in Latin America should be undertaken. In addition, scrub typhus should be considered as a potential diagnosis by physicians and public health officials when an eschar-associated rickettsiosis is suspected in this region.

Page created: December 07, 2022
Page updated: January 21, 2023
Page reviewed: January 21, 2023
The conclusions, findings, and opinions expressed by authors contributing to this journal do not necessarily reflect the official position of the U.S. Department of Health and Human Services, the Public Health Service, the Centers for Disease Control and Prevention, or the authors' affiliated institutions. Use of trade names is for identification only and does not imply endorsement by any of the groups named above.