We recently investigated a suspected outbreak of epidemic typhus in a jail in Burundi. We tested sera of nine patients by microimmunofluorescence for antibodies to Rickettsia prowazekii and Rickettsia typhi. We also amplified and sequenced from lice gene portions specific for two R. prowazekii proteins: the gene encoding for citrate synthase and the gene encoding for the rickettsial outer membrane protein. All patients exhibited antibodies specific for R. prowazekii. Specific gene sequences were amplified in two lice from one patient. The patients had typical clinical manifestations, and two died. Molecular techniques provided a convenient and reliable means of examining lice and confirming this outbreak. The jail-associated outbreak predates an extensive ongoing outbreak of louse-borne typhus in central eastern Africa after civil war and in refugee camps in Rwanda, Burundi (1), and Zaire.

During World Wars I and II, typhus spread through North Africa, the Pacific Islands, and Europe, especially in German concentration camps. In North Africa, the epidemics involved mainly civilian populations. U.S. forces were protected by the first vaccine applied on a large scale, the Cox-type vaccine (4). Epidemic typhus began to decline at the end of World War II when DDT started to be used as an insecticide. Ethiopia, Rwanda, Nigeria, and Burundi were the main foci of louse-borne typhus in Africa in the 1970s. Ethiopia reported 1,931 cases in 1983 and 4,076 cases in 1984 (5), with a death rate of 3.8% (6). However, these data were difficult to interpret because serologic testing was usually performed with inadequate techniques, and epidemiologic data were unavailable.

Political instability in Eastern European and African countries has recently caused conflicts in regions where the risk for typhus outbreaks is very high. In Yugoslavia and Rwanda, older persons who contracted epidemic typhus as youths can develop recrudescent illness and become the source of resurgent epidemics if louse infestation becomes prevalent. Recently, an outbreak of typhus was suspected in a Burundi jail; we diagnosed epidemic typhus by amplifying and sequencing portions of the citrate synthase and the rOmpB genes of R. prowazekii in lice.

In a jail in N'Gozi, Burundi, a local nurse observed patients with abrupt fevers of up to 40°C in association with a body louse outbreak from December 1995 to January 1996. Typhus was suspected, and chloramphenicol was given orally or intravenously. Blood specimens were obtained from nine patients (all young black men), and sera were sent to Marseille for serologic testing. Two lice per patient were obtained from the clothes of Patients Four, Five, Seven, Eight, and Nine; clinical information was also obtained (Table).

Patients' sera were tested by microimmunofluorescence. Vero cellgrown rickettsia were purified (7) and placed on slides as spots. R. prowazekii Breinl strain and R. typhi Wilmington strain were used. Both antigens were placed on either side of the same slide to compare the serum reactivity with the two antigens. Sera were diluted from 1/32 to 1/4,096. Immunoglobulin G (IgG) antibodies were detected by gamma chain specific anti-human Ig (Bio Merieux, Marcy l'Etoile, France), and IgM was detected after IgG was removed by RF adsorbent (Behring) (7). The diagnostic cutoff for microimmunofluorescence in diagnosing rickettsiosis is 1/128 for IgG and 1/64 for IgM (7,8). All nine patients were positive for both antigens; however, titers were identical for both antigens in Patients Four and Eight. In the other patients, antibodies were higher for R. prowazekii than for R. typhi by one-to-five dilution for IgG. IgM antibodies were at the same level against both antigens in all patients (Table).

Lice were sent to Marseille and arrived dry; they were crushed, and DNA suitable for use as a template in PCR was extracted using QIAGEN columns (QIAamp Tissue Kit, QIAGEN, Hilden, Germany). Citrate synthase PCR amplification incorporated primers 120-M59 (CCGCAGGGTTGGTAACTGC) (9) and 120-508 (CCAAGTGATAAGAGGAGCTT) selected from the R. prowazekii ompB sequence (10). The citrate synthase amplicons were subjected to restriction fragment length polymorphism analysis using the enzyme AluI and were identical to that previously described for R. prowazekii (11). Sequence determinations were performed by using an automated laser fluorescent DNA sequencer as previously described (12). The citrate synthase and rOmpB sequences obtained from the lice had 100% homology with that of R. prowazekii strain Breinl. Of the 10 tested, two lice from the same patient (four) were positive.

Cause, Symptoms, and Diagnosis

Social conditions are critical factors influencing the reemergence of disease. Louse infestation occurs when cold weather, poor hygiene, and poverty are prevalent; these conditions have been present in refugee camps in Rwanda and Zaire recently (13,14). Louse infestation has also been found in several eastern European countries and in homeless persons in western Europe (15). 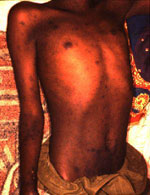 Figure. Rash in a man with epidemic typhus in Burundi.

Epidemic typhus was suspected in a refugee camp in Goma, Zaire, in 1994, but the outbreak was unconfirmed (14). Typhus is usually exanthematic, and a careful clinical examination will find a rash in more than half of the cases. In the present series, clinical data were recorded retrospectively mainly on the basis of a nurse's report and are probably incomplete (Table). In an outbreak, looking for exanthema is critical for typhus suspicion. The typhus exanthema is frequently purpuric and is observed even on dark skin in 33% of cases (6). The other typical symptoms are neurologic signs including seizures, coma, and mental confusion, which gave the disease its name (ORIG: from the Greek word "typhos," which means smoke, cloud, stupor arising from fever). Neurologic involvement was noted in seven of the nine cases: symptoms included coma, seizures, mental confusion, and delirium. Rash was described in only two patients (Figure); splenomegaly in three patients; cough in three patients; dyspnea in three patients; and hypotension in four patients. Two patients died. The other patients recovered rapidly after receiving chloramphenicol. The prevalence of pulmonary symptoms is high in general as noticed here.

In situations like those observed in this jail, one can suspect either murine or epidemic typhus. Murine typhus is less severe. However, in poor hygienic conditions, rats are prevalent, and the risk exists for both diseases. Consequently, in such situations it is critical to discriminate between R. prowazekii and R. typhi infections because they do not have the same epidemic potential. Diagnosis is usually provided by microimmunofluorescence; in some cases antibody levels are sufficient to differentiate between the two diseases. IgG titers are usually different, but IgM titers are not. When, as in Patients Four and Eight, antibodies are at the same level, cross-adsorption, a tedious and expensive procedure requiring large amounts of antigens and serum (not available in our study [16]), can differentiate between the two diseases. The use of arthropod vectors for gene amplification and disease recognition has been reported (17). In a case of laboratory-acquired human typhus, diagnosis was confirmed by PCR (18). However, in the present work, we report for the first time the use of the louse in diagnosing epidemic typhus in the field.

The confirmation of a typhus outbreak in Burundi is of concern, given the relative political instability in this area of the world. A preliminary report from the World Health Organization discusses a current large outbreak in Burundi with an estimated 24,000 cases (1). It is uncertain if the outbreak we observed is related to the current epidemic, but our present work confirms continuing cycles of louse-borne typhus in Burundi. Delousing (14) is critical to typhus prevention. The treatment for typhus is simple and inexpensive: a single dose of 200 mg of doxycycline provides cure (19).

We stress the major risk for exanthematic typhus in central eastern Africa including Burundi, Zaire, and Rwanda and the importance of sending lice to reference laboratories to identify the pathogens when a typhus outbreak is observed. Molecular identification by PCR and sequencing offers a rapid, sensitive, and specific identification method for Rickettsia, even when epidemiologic investigations are undertaken.