To assess the potential risk for other tick-borne diseases, we collected 100 adult Ixodes scapularis in Hunterdon County, a rapidly developing rural county in Lyme disease–endemic western New Jersey. We tested the ticks by polymerase chain reaction for Borrelia burgdorferi, Babesia microti, and the rickettsial agent of human granulocytic ehrlichiosis (HGE). Fifty-five ticks were infected with at least one of the three pathogens: 43 with B. burgdorferi, five with B. microti, and 17 with the HGE agent. Ten ticks were coinfected with two of the pathogens. The results suggest that county residents are at considerable risk for infection by a tick-borne pathogen after an I. scapularis bite.

The vector-borne diseases Lyme disease, human babesiosis, and human granulocytic ehrlichiosis (HGE) are emerging in the Northeast and upper Midwest regions of the United States (1,2). The etiologic agents for these diseases (Borrelia burgdorferi, Babesia microti, and the HGE agent, respectively) appear to share the same vertebrate reservoir host (Peromyscus leucopus) and tick vector (Ixodes scapularis) (3-6). Immunologic evidence of human coinfection with these pathogens has been reported (7-10), and a culture-confirmed case of coinfection with B. burgdorferi and the HGE agent has recently been described (11). Thus, in Lyme disease–endemic areas, there may be a substantial risk for coinfection with B. burgdorferi and either B. microti or the HGE-causing rickettsia. 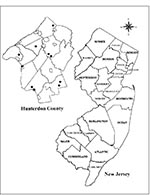 Hunterdon County (population 118,000) is a rural, but rapidly developing, county in western New Jersey (Figure), with many homes in wooded settings. In 1996, the county had the third highest case rate of Lyme disease (524 per 100,000) of all counties in the United States (Centers for Disease Control and Prevention case reports). The county has also had many suspected, but no serologically confirmed, cases of HGE.

The risk of acquiring a tick-borne pathogen in a specific geographic location depends largely on tick density and the prevalence rate of the agent in the tick population. Although cultivation of a microbial agent is considered optimal, molecular detection is more practical since it permits the rapid assay of large numbers of individual specimens. We report here the prevalence rate of B. burgdorferi, B. microti, and the agent of HGE in I. scapularis in Hunterdon County by species-specific polymerase chain reaction (PCR).

One hundred adult I. scapularis were collected by drag cloth or from personal clothing at 10 sites in the county during the fall of 1996 (Figure). Ticks were stored at room temperature in 70% ethanol until analysis. DNA was isolated from individual ticks with the Isoquick DNA extraction kit (ORCA Research, Bothell, WA) (12). The final DNA pellets were resuspended in 50 µl of sterile water, and a 10- µl aliquot was used for each PCR test. B. burgdorferi–specific PCR used primers IS1 and IS2 (13). The HGE agent was detected by PCR using primers GER3 and GER4, as described by Munderloh et al. (14), and B. microti DNA was detected according to methods used by Persing et al. (15). PCR products were electrophoresed on 2% agarose gels stained with ethidium bromide. For B. burgdorferi and B. microti, hybridization with specific probes was carried out after transfer to nylon membranes (13). In each PCR experiment appropriate negative controls were used; these included master mix controls lacking template and reactions containing B. burgdorferi DNA, HGE agent DNA, or Escherichia coli DNA as additional controls for HGE agent, B. burgdorferi, or B. microti PCR, respectively. To prevent cross-contamination, specimen preparation, PCR amplification, and post-PCR analysis were performed in separate laboratories.

Results of PCR analysis for each of the pathogens on individual ticks are presented in the Table. At least one of the three pathogens was present in 55% of the ticks. The highest prevalence rate was that for B. burgdorferi (43/100), followed by the agent of HGE (17/100) and B. microti (5/100). Furthermore, these pathogens were widely distributed. At least one tick at each site was infected with B. burgdorferi, nine of 10 sites had HGE agent–positive ticks, and B. microti–positive ticks were found at five different collection sites. Ten ticks were coinfected with two of the three agents; no ticks were infected with all three pathogens. The B. microti PCR amplification products were gel purified and subjected to automated DNA sequencing. The 238 bp products yielded sequences identical to that reported for B. microti 18S ribosomal DNA (15).

The prevalence rates for the three pathogens reported here are consistent with earlier studies at selected sites in the northeastern United States. Telford et al. reported prevalence rates of 36%, 11%, and 9% for B. burgdorferi, the HGE agent, and B. microti, respectively, in adult I. scapularis on Nantucket Island, Massachusetts; coprevalence of B. burgdorferi and the HGE agent was 4%, and no simultaneous infection with B. burgdorferi and B. microti was observed (4). We have reported prevalence rates of 52% and 53% for B. burgdorferi and the HGE pathogen, and coprevalence of 26% at a site in Westchester County, New York (5). Given the simultaneous infection of I. scapularis with these pathogens, it is not surprising that numerous serosurveys of Lyme disease patients indicate the coincident presence of antibodies to B. burgdorferi and B. microti and human granulocytic ehrlichia (7-10). These findings do not establish concurrent, active infection, nor do they demonstrate simultaneous transmission by a single tick bite; however, they suggest that persons living in disease-endemic areas are exposed to these agents, presumably as a result of tick bites.

Human infection by any of the three tick-borne agents alone generally results in similar acute manifestations, including fever, headache, and myalgia (1,10,16). Reported cases of Lyme disease greatly outnumber those of babesiosis or HGE. This, in conjunction with seroepidemiologic data, suggests that many infections with B. microti and granulocytic ehrlichia are subclinical. Dual infection with B. burgdorferi and B. microti often results in more severe illness (10); whether this is also true for concurrent infection by the agents of Lyme disease and HGE remains to be established. Human coinfection by multiple tick-borne agents may account for the variable nature of the clinical manifestations of Lyme disease.

This study demonstrates that the agents of Lyme disease, human babesiosis, and HGE coexist in the tick population of a previously identified Lyme disease–endemic region of New Jersey. The study provides further evidence that these three pathogens may be prevalent throughout the range of I. scapularis. Infection with any of these three tick-borne pathogens should be considered for residents or visitors of a disease-endemic area who have flulike symptoms and a history of a tick bite.

We thank Gary Wormser and Dennis White for helpful comments, Chris Kolbert and David Persing for providing advice and positive controls for B. microti PCR, and the Hunterdon County Tickborne Disease Research Group and Hunterdon Medical Center for their support. This work was supported in part by NIH grant AR41511.