Plague, a Reemerging Disease in Madagascar

Human cases of plague, which had virtually disappeared in Madagascar after the 1930s, reappeared in 1990 with more than 200 confirmed or presumptive cases reported each year since. In the port of Mahajanga, plague has been reintroduced, and epidemics occur every year. In Antananarivo, the capital, the number of new cases has increased, and many rodents are infected with Yersinia pestis. Despite surveillance for the sensitivity of Y. pestis and fleas to drugs and insecticides and control measures to prevent the spread of sporadic cases, the elimination of plague has been difficult because the host and reservoir of the bacillus, Rattus rattus, is both a domestic and a sylvatic rat.

In the last 15 years, Madagascar (population 13 million) has accounted for 45% of the cases of plague in Africa (1).

Plague was brought to the island of Madagascar in 1898 by steamboats from India and has never disappeared. As a result of vaccination campaigns, improved housing and public hygiene, and the discovery of streptomycin and insecticides, plague was controlled in the 1950s. During the next 30 years, only 20 to 50 cases per year were reported in the entire country. However, since 1989, the number of suspected cases has increased steadily (Figure 1). Since 1990, 800 to 1,500 cases of suspected plague have been reported, of which 150 to 230 were smear-positive (presumptive cases) or confirmed by the isolation of Y. pestis (2,3). The population exposed to plague in the plateaus is approximately 5 million; the mean annual rate of known human cases (except in Mahajanga) is 3 to 4 per 100,000 inhabitants. The mean annual death rate is 20% of the confirmed or presumptive cases. Bubonic plague is the main clinical form of the disease (approximately 95% of cases). 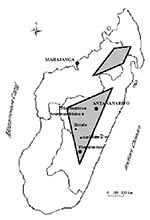 Figure 2. Plague foci in Madagascar. The plague-endemic zones are in the gray areas and in the port of Mahajanga.

With the exception of the west coast port of Mahajanga, plague is endemic in areas more than 800 m high. The major focus area is a central triangle, and the minor focus is a northern diamond (Figure 2). The main plague foci (in order of importance) are Mahajanga, the district of Ambositra, the town of Antananarivo, and the districts of Fianarantsoa II, Miarinarivo, Betafo, and Soavinandriana. In the plateaus, the human plague season is September to April, while in Mahajanga it is July to November.

In 1996, 1,644 suspected plague cases were reported; biologic samples were available for 1,316. A total of 173 confirmed and 56 presumptive cases were officially reported. In 1997, 2,127 suspected cases were reported from January to October, and more than 2,500 total cases were expected by the end of 1997. So far, 260 are confirmed and 33 are presumptive cases. The number of confirmed or presumptive plague cases is underestimated because of underreporting in remote areas and the lack of sensitivity of the bacteriologic techniques used for diagnosis. Our preliminary results, obtained by immunodiagnostic tests, such as anti-F1 antibody detection (4) and F1 antigen tests (tests supplied by the Naval Medical Research Institute, Bethesda, MD), suggest a number of plague cases two to three times higher than that obtained by conventional methods (S. Chanteau and J. Burans, unpub. data). Whether the significant increase between 1996 and 1997 results from better notification of the cases following educational campaigns or a real increase in disease incidence is unknown.

In Madagascar, the reservoirs of Y. pestis are two species of rats, Rattus norvegicus and R. rattus. The sylvatic reservoir of Y. pestis is not well documented. The urban domestic rat R. norvegicus, introduced to Madagascar during the 20th century, can only be found (in larger numbers than R. rattus) in coastal cities and Antananarivo. In contrast, R. rattus, probably imported into Madagascar with the first human migrations, has invaded every ecosystem of the island. Thus, it is both a domestic and a wild rodent. It is generally the only type of rodent found in small towns, villages, rice fields, and grasslands. The reservoirs of Y. pestis during the interseason period are the R. rattus and R. norvegicus that have resisted infection; therefore, it is almost impossible to eliminate plague from the island (2).

Two species of rat fleas are vectors of plague in Madagascar. The most effective are the classic oriental rat flea, Xenopsylla cheopis, and the endemic flea, Synopsyllus fonquerniei (2); both are found on R. rattus, although X. cheopis is almost exclusively on urban and indoor rodents, while S. fonquerniei is found on outdoor and wild rodents (S. Laventure and J.M. Duplantier, unpub. data). Ongoing research is examining the interrelationships between the two species of rats and the two species of fleas in the epidemiologic cycle of plague in Madagascar.

The reemergence of plague in Madagascar probably reflects the general breakdown of traditional measures of plague control. Prolonged maintenance of the domestic rat-to-flea cycle that accounted for the historic plague pandemics will almost surely provide an opportunity for selection of new traits that could make the organism even more virulent. In fact, three new variants of Y. pestis have recently emerged in the region of Ambositra and Ambohimahasoa, one of the most active plague foci of the island. These new ribotypes tend to spread to new geographic areas; whether or not they have acquired selective advantages is being explored (5). Furthermore, the opportunity for gene exchange with enteric bacteria is greatly enhanced. It may be important that the first naturally occurring antibiotic-resistant strain of Y. pestis was recently isolated in Madagascar (6,7).

In Mahajanga (population 150,000), after two epidemics in the beginning of the 20th century, plague remained under control between 1928 and 1990 (2). In July 1991, the disease suddenly reappeared in a shantytown near the marketplace of Marolaka; of the 170 suspected cases, 41 were confirmed or presumptive. After 3 years without reported cases, three successive outbreaks occurred: July 1995 (8,9), July 1996, and July 1997. During the 1995 and 1996 outbreaks, a total of 1,058 suspected cases were reported; only 109 cases were confirmed, and 30 cases were smear-positive. However, serologic testing, mainly F1 antibody detection by enzyme-linked immunosorbent assay (ELISA) (4), allowed the diagnosis of 93 additional cases (10). Thus, the mean annual rate of known human cases is 77 per 100,000 inhabitants. During the ongoing epidemic, from July to October 1997, 376 suspected cases (120 bacteriologically confirmed) have been reported and tended to spread in new quarters of the town.

Every human outbreak has been preceded by a high number of rat deaths. During and after epidemics, all shrews captured were infected with many X. cheopis. Ongoing studies are examining the role of the shrew Suncus murinus in the maintenance of plague between epidemics.

Since plague was introduced in the highlands in 1921, it has never disappeared from remote villages; however, in Antananarivo, it has been controlled; no human cases were reported between 1953 and 1978. In 1979, the first confirmed case was found in one of the ancient foci of the town (11). In the 1990s, a growing number of cases have been reported; 10 to 25 each year have been confirmed or are presumptive (Figure 3). In 1996, confirmed plague cases were found in 17 quarters of the capital. The mean annual rate of human cases is 1.4 per 100,000 inhabitants in 1995 and 1996.

In 1995, 10% of 625 rats trapped near a marketplace were infected with Y. pestis; 80% were anti-F1 seropositive (S. Chanteau, J.A. Drominy, and B. Rasoamanana, unpub. data). The monthly flea index (mean number of X. cheopis per rat) in this quarter was more than 4 year-round. Such a high index represents a serious threat, especially since most of these fleas are resistant to deltamethrin (12). Other families of insecticides, such as the carbamates, can be proposed. Since 1996, the Ministry of Health and local government have made serious efforts to educate the population and improve public hygiene.

A preliminary study of rats trapped in eight other quarters of the capital in 1997 showed a mean seroprevalence of 14% by ELISA (J.A. Drominy and S. Chanteau, unpub. data). The circulation of Y. pestis in the rat population was significantly larger than it was in 1965 (4.5%) (2).

The national plague control program is financially supported by the World Bank and the French Ministry of Cooperation. The surveillance system used is based on immediate compulsory notification of every suspected case of plague and its biologic confirmation by the Central Laboratory. All patients with suspected cases are treated with streptomycin, and their contacts are treated with sulfonamides to prevent disease spread. Insecticides are used for flea control. Every strain of Y. pestis isolated from humans, rats, and fleas is tested for drug sensitivity, and the susceptibility of fleas to insecticides is determined. The isolation of the first multidrug-resistant strain of Y. pestis in 1995 (6,7) and the increasing resistance of fleas to insecticides have caused much concern (12).

This national program, implemented in Madagascar for several decades, has been hampered by economic and operational difficulties and urgently needs to be strengthened.

Page created: December 14, 2010
Page updated: August 03, 2011
Page reviewed: August 03, 2011
The conclusions, findings, and opinions expressed by authors contributing to this journal do not necessarily reflect the official position of the U.S. Department of Health and Human Services, the Public Health Service, the Centers for Disease Control and Prevention, or the authors' affiliated institutions. Use of trade names is for identification only and does not imply endorsement by any of the groups named above.

Plague, a Reemerging Disease in Madagascar