Mycobacterium canettii, the Smooth Variant of M. tuberculosis, Isolated from a Swiss Patient Exposed in Africa

An exceptionally smooth and glossy morphotype of Mycobacterium tuberculosis complex was isolated from a 56-year-old Swiss patient with mesenteric tuberculosis. Direct 16S rRNA sequence analysis of the hypervariable signature gene regions revealed a 100% homology to the specific M. tuberculosis complex sequence. Spoligotyping and restriction fragment length polymorphism analyses using the insertion sequences IS6110 and IS1081 and the polymorphic GC-rich sequence as additional genetic markers identified the isolate as the novel taxon M. canettii. Like a Somali child with a similar case, this patient probably contracted the infection in Africa, which raises questions about the geographic distribution of M. canettii.

A novel pathogenic taxon of the Mycobacterium tuberculosis complex was described (1) in 1997 in a highly exceptional strain, designated So93, isolated in 1993 from a 2-year-old Somali child with lymphadenitis. Although on the basis of biochemical tests and the 16S rRNA gene sequence this isolate was clearly a member of the M. tuberculosis complex, it exhibited an unusually smooth and glossy colony morphology. Genetically, strain So93 differed from all known M. tuberculosis complex strains (nearly 2,000 M. tuberculosis isolates have been examined) (1). It contained a single copy of the insertion sequence IS1081, had a direct repeat region with an exceptional composition, and differed in the sequence of the recA gene. In 1969, Canetti had isolated from a French patient an M. tuberculosis strain with a smooth colony morphology. Daffé et al. (2) had demonstrated that this particular strain differed from the commonly rough strains by having large amounts of lipooligosaccharides. Isolate So93 and the Canetti strain from the 1960s shared virtually all phenotypic and genetic characteristics. Therefore, these two smooth M. tuberculosis variants were designated M. canettii (1).

We report here a third tuberculosis (TB) case caused by M. canettii. The mycobacterial isolate NZM 217/94 was cultured from pus aspirated from the ileocecal region of a 56-year-old male patient born in Switzerland. Phenotypic and genetic characteristics were compared with both the isolate So93 and the Canetti strain.

The patient had been working for an international organization since 1963, in Uganda for 20 years, then in Kenya for 1 year. HIV infection was detected in this patient in 1993. That same year, he contracted pneumonia of unknown etiology, which was successfully treated with cotrimoxazole. Two short episodes of severe diarrhea followed in 1994. The patient was transferred from Kenya to the University Hospital in Geneva, where a partial occlusion of the ileum caused by an extrinsic compression was diagnosed. A right hemicolectomy was performed. An extensive inflammatory mass of mesenteric lymph nodes was strongly positive for acid-fast bacilli by direct microscopy. After as little as 1 week, culture (BACTEC 12B medium; Becton Dickinson Diagnostic Instrument Systems, Sparks, MD) yielded mycobacteria, which were identified as M. tuberculosis complex. The patient was already in stage C2 of AIDS, which favored a rapid development of mesenteric disease. No pulmonary signs of the disease were observed (3). Response to quadruple antituberculotic chemotherapy was excellent. However, within 3 months, extensive cutaneous lesions developed due to a generalized highly malignant non-Hodgkin lymphoma, another complication of AIDS, known as fulminant disease with poor prognosis. A cytostatic therapy was initiated. The patient returned to Kenya but did not follow any treatment regimens. He was hospitalized in Geneva in 1995 with severe cachexia and died 9 months later. The postmortem findings showed massive invasion of the abdominal cavity with malignant lymphoma but no further evidence of active TB, neither by histology nor by culture. 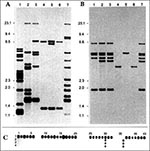 To determine whether the isolate from the Swiss patient represented the M. canettii genotype, restriction fragment length polymorphism (RFLP) analyses and spoligotyping were performed (1,10). The IS6110 RFLP patterns of the Swiss (NZM 217/94) and the Somali isolates (So93) were identical (Figure 2a). As previously shown, the Canetti isolate contains an additional copy of this insertion sequence. Furthermore, the Swiss isolate contains a single copy of IS1081 on a similarly sized PvuII restriction fragment, as previously found in the So93 strain (Figure 2b). The patterns generated with the polymorphic GC-rich repetitive sequence (PGRS) of strains NZM 217/94 and So93 were identical; whereas for the Canetti strain, 7 out of 20 PGRS-containing AluI restriction fragments were found at other positions (data not shown). By the recently developed spoligotyping technique (10) we could demonstrate that the Swiss isolate contained the same two spacer sequences found in both the Canetti strain and the So93 isolate (Figure 2c).

These data demonstrate the first TB case caused by M. canettii in a Swiss patient. RFLP analyses using IS6110, IS1081, and PGRS as probes as well as spoligotyping revealed the same DNA fingerprint patterns for the Swiss isolate as previously found for strain So93 isolated from a Somali child. With its highly exceptional smooth and glossy colony morphology and the unusual, abundant growth, the Swiss isolate belongs to the same taxon of the M. tuberculosis complex as the Somali isolate and the Canetti strain. The Canetti strain isolated in France about 30 years ago (from a patient of whom no further details are available) showed RFLP patterns that were highly similar but not identical to the ones of the Swiss and Somali isolates. Our data indicate 1) that the M. canettii taxon comprises strains with some degree of evolutionary divergence and 2) that this evolutionary lineage already existed but was likely overlooked because the lack of adequate genetic characterization techniques.

Although the exact source of infection in this latest clinical case of M. canettii could not be established with certainty, the patient was repeatedly exposed to TB patients in East Africa. Since the patient had no known exposure to pets or wild animals, a human source of infection seems very likely. This report indicates that M. canettii may be of wider prevalence than previously thought; therefore, further studies are needed to determine its geographic distribution (i.e., its reservoir) and eventually the extent of genetic variation and presence of virulence factors associated with this particular taxon of the M. tuberculosis complex. In addition, this study demonstrates the value of applying a combination of several subtyping methods by which future studies can be directed to determine whether M. canettii is emerging as an important pathogen.

Mycobacterium canettii, the Smooth Variant of M. tuberculosis, Isolated from a Swiss Patient Exposed in Africa