We describe refinements to and new experimental applications of the Data Mining Surveillance System (DMSS), which uses a large electronic health-care database for monitoring emerging infections and antimicrobial resistance. For example, information from DMSS can indicate potentially important shifts in infection and antimicrobial resistance patterns in the intensive care units of a single health-care facility.

We have defined a new exploratory data mining process for automatically identifying new, unexpected, and potentially interesting patterns in hospital infection control and public health surveillance data. This process, and the system based on it, Data Mining Surveillance System (DMSS), use association rules to represent outcomes and association rule confidences to monitor changes in the incidence of those outcomes over time. Through experiments with infection control data from the University of Alabama at Birmingham Hospital, we have demonstrated that DMSS can identify potentially interesting and previously unknown patterns. Future work on prospective clinical studies to determine the usefulness of DMSS in hospital infection control is needed, as is improved event presentation for the user and strategies for handling larger datasets.

The statistical strategies developed for automatically detecting temporal patterns in surveillance data require that analysts explicitly define outcomes of interest before surveillance begins. The Data Mining Surveillance System (DMSS), on the other hand, is not constrained to monitoring changes in user-defined outcomes. In DMSS, complex outcomes are represented by association rules, and outcome incidence is captured monthly.

An early version of DMSS, along with association rules and early experiments with a single organism, has been described (1). We briefly describe a newer version of DMSS and experimental results obtained by using it to analyze 1 year's data from intensive care units (ICUs) at the University of Alabama at Birmingham Hospital.

Duplicate records were removed so that for each patient, no more than one isolate per organism per month was included. In each remaining record, certain antimicrobial drug items were removed (only drugs to which the organism is historically susceptible at least 50% of the time remained). Additionally, items of the form S~Antimicrobial were removed so that only I~Antimicrobial and R~Antimicrobial items remained. Finally, data were divided into 1-month partitions (p1…pn) before analysis. For each partition pi, all frequent sets with support of at least 3 (FSST >2) and association rules with precondition support greater than 5 were generated. Both the frequent set discovery and association rule-generating algorithms are beyond the scope of this review (3).

Rule templates are handcrafted by domain experts to eliminate inherently uninteresting or nonsense rules. This is accomplished through iterative experiments with representative data by initially using few templates and then creating and modifying templates on the basis of pattern review. 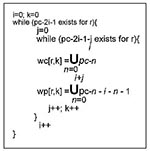 Figure. Algorithm used to construct current and past windows for association rule r.

By analyzing information stored in the history, DMSS generates alerts that describe an extreme change in the incidence of an outcome B in a group A over time. For example, Table 2 describes the incidence of Acinetobacter baumannii in a nosocomial tracheal aspirate and in SICU isolates over the past six partitions. Clearly, a shift in incidence occurs between the first 4 months and the most recent 2 months of the series. If we call months 1, 2, 3, and 4 the past window, wp, and months 5 and 6 the current window, wc, we can ask if there is an extreme change in the incidence between wp and wc. We compute the cumulative incidence proportion for wp (0/43) and for wc (5/18) and compare the two by a statistical test of two proportions. To generate an alert for an association rule r, DMSS first constructs a current window (wc) and a past window (wp) on the series of incidence proportions of r (wc[r,0], wp[r,0] from the algorithm in the Figure). Second, it computes the cumulative incidence proportion for each window. Third, it compares the two cumulative incidence proportions by a test of two proportions. Finally, if the difference between the proportions is statistically extreme (p < a = 0.01), it generates an alert. The value of is user-defined and rather arbitrary. If an alert is not generated, the next set of current and past windows is formed (wc[r,1], wp[r,1] from the algorithm in the Figure), and the cumulative incidence proportions are compared. Window pairs are generated for the same association rule until an alert is generated or no more window pairs remain to be formed. DMSS generates all alerts by executing the procedure described on every association rule in the history.

The total number of events was reduced from 251, by including all rules, to 36, by using the templates in Table 1; thus, classes of inherently uninteresting rules were eliminated. A retrospective look at the 155 events eliminated by the rule templates showed that they were uninformative. Therefore, the introduction of templates resulted in a more focused presentation of DMSS output.

Of the 36 events, 18 were judged potentially interesting. Table 3 contains several representative events, one per row. Each row contains the association rule, the incidence proportions in wc (bold), and the incidence proportions in wp (nonbold). For example, event 1 in Table 3 describes an increase in the number of Staphylococcus aureus resistant to oxacillin, clindamycin, and erythromycin isolated from tracheal aspirates in the fourth partition, and compared with those isolated in the 2nd and 3rd partitions. Of the events identified by DMSS, only the NICU and SICU had events that were location-specific (Table 3), while eight events were not.

The events identified by DMSS must be investigated by domain experts to determine their actual importance. In this example, the data burden was small since in a prospective analysis only a few events would be presented to the user each month, thus allowing for the investigation of each event.

Dr. Moser is associate professor, Department of Pathology, University of Alabama at Birmingham, and serves as director of Laboratory Information Services, associate director of Clinical Microbiology for University Hospital, and director of the Pathology Informatics Section. His research interests are applied research in diagnostic microbiology and the application of software as an aid to the intelligent analysis of medical information, especially that generated in laboratory medicine.

This work was supported in part by cooperative agreement U47-CCU411451 with the Centers for Disease Control and Prevention (SAM) and a predoctoral research fellowship LM-00057 from the National Library of Medicine (SEB).