From Shakespeare to Defoe: Malaria in England in the Little Ice Age 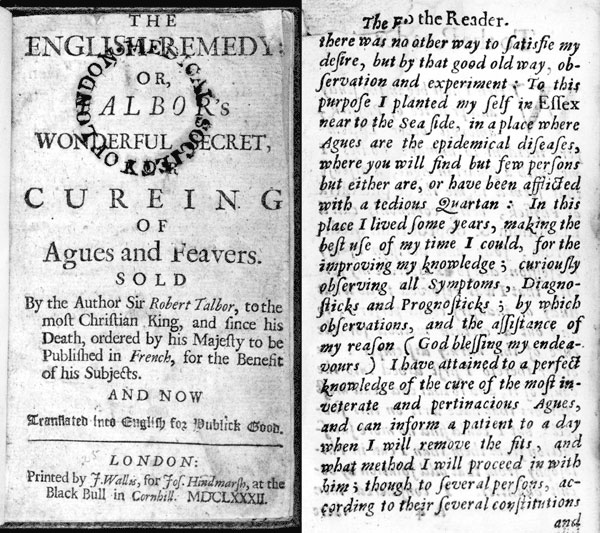 Figure 5. The English Remedy: Talbor's Wonderful Secret for Curing of Agues and Feavers (1682). Robert Talbor sold the secrets of his malaria treatment to King Louis XIV for 2,000 guineas, on condition that they would not be published until after his death. In 1682, Talbor's remedy was published in French; the English translation appeared in the same year. Front page of English translation and introductory page in which Talbor describes how he went to Essex, and used "that good old way, observation and experiment . . . by which observations, and the assistance of my reason (God blessing my endeavours) I have attained a perfect knowledge of the cure of . . . Agues." Reproduced courtesy of Wellcome Institute for the History of Medicine, London.

1St. Thomas' Hospital (1213), in the Borough of Lambeth, was on the edge of the River Thames, surrounded by tidal marshes. Parliament met in two buildings at a similar site in the Borough of Westminster, directly across the river. Both areas were notoriously malarious. Centuries later, the American Founding Fathers followed British parliamentary procedure in choosing a site for their new nation's capital at the edge of a malarious swamp, later referred to as "A Mud-hole Equal to the Great Serbonian Bog." The Serbonian Bog probably refers to the vast flood plains of the Danube that border northern Serbia and Bulgaria. The Balkan region was the last major stronghold of malaria in Europe. Malaria was finally eliminated there in 1975.