Improved surveillance indicates that Lyme borreliosis, an emerging zoonosis in the United Kingdom, has increased from 0.06/100,000 during 1986-1992 to 0.32/100,000 since 1996. Case reports peaked in the third quarter of each year. Several high-incidence localities were identified. Erythema migrans was reported in 41% of patients; arthritis in 4%; musculoskeletal symptoms in 18%; and neuroborreliosis in 15%.

Lyme borreliosis, a zoonosis caused by the spirochete Borrelia burdorferi sensu lato and transmitted by Ixodes ticks, is the most prevalent and widespread vector-borne human infection in the northern hemisphere, with enzootic cycles that can be maintained in a wide range of ecologic conditions (1). Reported annual incidence rates throughout Europe range from 16 cases/100,000 voluntarily reported in France, to 80/100,000 in seven counties in southern Sweden where the disease became temporarily reportable in 1992-93, and 120/100,000 in Slovenia (2), where it is also reportable. Lyme borreliosis appears to be rare in the United Kingdom, although B. burgdorferi s.l. has been detected by polymerase chain reaction (PCR) in many tick populations and in archived specimens collected over the last 100 years (3).

Surveillance for Lyme borreliosis has been ongoing in England and Wales since September 1986, based mainly on voluntary reporting of serologically confirmed cases by laboratories to the Public Health Laboratory Service (PHLS) Communicable Disease Surveillance Centre (CDSC) (4). In 1992, the case definition of the Centers for Disease Control and Prevention became available (5), and in 1996 a European case definition came into use (6). Serologic diagnosis in the two reference laboratories in England and Wales follows an internationally recommended two-step approach (7) of antibody screening tests followed by immunoblots of reactive or equivocal samples. Reference laboratory serologic tests have improved, with continuing refinement of immunoblot techniques and interpretation, as well as introduction of immunoglobulin (Ig)M tests. Borrelial cultures, PCR, and genotyping have also been introduced, mainly for research. Recently, commercial antibody test kits have become more widely available, and many diagnostic laboratories now use them for preliminary screening and send only reactive samples to reference laboratories for immunoblot testing. Some kits have IgM detection components (either singly or in combination with IgG) and may detect antibody production at an earlier stage of infection than previously possible.

Serologically confirmed cases of Lyme borreliosis should be voluntarily reported to CDSC by the primary laboratory that referred the patient's specimen for confirmation, but reporting has been incomplete. An enhanced surveillance scheme was introduced in 1996, with reference laboratories also reporting to CDSC. Since 1997 the PHLS reference laboratory has routinely sent a questionnaire to primary laboratories seeking information on patient demographics, clinical features, and tick exposure. This strategy has greatly improved Lyme borreliosis surveillance, with an 85% return rate of questionnaires in the first full year of implementation. From 1986 to 1992, CDSC received 227 reports, a mean annual rate of 0.06/100,000. This rate increased to an average annual rate of 0.11/100,000 during 1992-1996 (n=235) and to 0.32/100,000 in the first two years of enhanced surveillance (n=334). 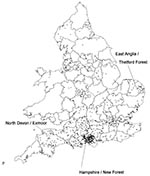 A clear, consistent seasonal pattern was seen, with 48% of cases reported in the third quarter of each year. The peak in laboratory reports was in September, representing peak onset of symptoms in early summer. Cases were reported by laboratories in 68 counties (Figure), but only 14 counties had more than 10 cases each. Forty-five percent of reports were of cases in three contiguous counties in southern England: 219 from Hampshire, 72 from Wiltshire, and 61 from Dorset. This area includes well-known foci of Lyme borreliosis in and near the New Forest and Salisbury Plain. Other counties with a relatively high number of case reports were Devon (47 cases) and Somerset (32 cases) in southwestern England and Norfolk in East Anglia (29 cases). One hundred eighteen (14.9%) of the 796 cases were reported to have been acquired abroad, mainly in the United States, France, Germany, Austria, and Scandinavia. Most of these cases occurred in vacationers. Forty-six (5.8%) cases were apparently acquired occupationally: nine through work with or hunting of deer, seven through forestry work, three through farm work, one through exposure during tick ecology studies, and another through work as a veterinary surgeon. For the others, occupational details were not reported. The proportion of Lyme borreliosis patients with a reported history of tick bites has risen steadily, from 24% in 1986-1992 and 32% in 1993-1996 to 39% in 1997-98. Other patients (30%, 34% and 42% in the corresponding periods) gave histories of insect bites and may not have distinguished between insects and ticks.

Clinical features (Table) reported over the 13-year period include neuroborreliosis (facial palsy, radiculopathy, meningitis, and "neuroborreliosis") and nonspecific neurologic symptoms (e.g., fatigue, malaise, and headache). Neuroborrelosis was reported in 24% (21/91) of patients 14 years of age, compared with 14% (96/701) in other age groups (x2 = 5.6, p = 0.02), a difference explained by a higher reported incidence of isolated facial palsy in children.

Musculoskeletal symptoms have been divided into "arthritis" and "other," which includes arthralgia and myalgia. Arthritis was reported in 9 (20%) of 45 patients 15-24 years of age, compared with 22 (3%) of 746 patients in other age groups (x2 = 28.5; p < 0.001). The proportions of cases associated with both a tick bite and erythema migrans increased from 12% in 1986-1992 to 22% in 1997-98. Only three cases of acrodermatitis chronica atrophicans were reported, and cardiac involvement was reported in only five cases.

The large increase in Lyme disease incidence in 1997 and 1998 may represent a surveillance artefact resulting from increased awareness of the disease, greater access to diagnostic facilities, more sensitive diagnostic methods, and more complete reporting to CDSC. Awareness of the infection has increased rapidly as a result of media interest and ready access to medical information from Internet sources. However, Lyme borreliosis is probably not as widely recognized in the United Kingdom as in some other European countries (8). Enhanced long-term surveillance and additional cross-checking between the PHLS reference laboratory and CDSC are needed to allow detection of the time trends in disease incidence. The apparent widening of the geographic areas reporting cases is probably due to improved reporting, but current surveillance data indicate areas with high disease incidence from recreational and occupational exposures.

Population surveillance has clarified the clinical manifestations of Lyme borreliosis in England and Wales. However, the proportion of patients with erythema migrans may be relatively low, either because patients with erythema migrans are easily identified without serologic tests or because serologic tests have relatively low sensitivity at this early stage. This underreporting could bias reporting towards a higher proportion of the more complicated later-stage infections (2) or those with atypical acute symptoms.

Differences between clinical symptoms in the United States and Europe have been attributed to differences in prevalence of B. burgdorferi genospecies. In the United States, B. burgdorferi sensu stricto predominates, with an associated pattern of musculoskeletal complications. Thus, patients with U.S.-acquired infections had a higher rate of arthritis than those whose cases were acquired in mainland Europe. In Europe, at least two other pathogenic genospecies are found in addition to B. burgdorferi s.s.: B. afzelii, which is associated with skin manifestations, and B. garinii, which is associated with neurologic complications (9). Another strain, B. valaisiana, does not appear to be associated with manifestations of disseminated borreliosis. These genospecies have been identified in British tick populations, consistent with the broad range of clinical presentations seen in the United Kingdom. The relatively high prevalence of the apparently less pathogenic B. valaisiana in some British tick populations may be a factor in the low incidence of Lyme borreliosis observed in the United Kingdom.

Both the prevalence of B. burgdorferi-infected ticks and the incidence of Lyme borreliosis are highest in eastern Europe and decrease westward across the continent, including the British Isles (2). Throughout Europe, heterogenous deciduous woodlands provide favorable ecologic conditions for host species that maintain both ticks and spirochetes (10), and the high-incidence areas in the United Kingdom conform to this description. However, the distribution of infected ticks is far wider than the distribution of reported human cases, and Lyme borreliosis is an important potential emerging zoonosis in England and Wales. Factors that could increase incidence include changing patterns of land use, especially for recreation, and changes in the density of animals that act as reservoir hosts. Climatic factors such as drought or prolonged cold weather can substantially affect tick populations and their level of activity, which may be reflected in fluctuations in the incidence of Lyme borreliosis (11).

Dr. Smith is a clinical scientist in the Welsh Unit of the Public Health Laboratory Service (PHLS) Communicable Disease Surveillance Centre, Cardiff. A biochemist and zoologist by training, he is responsible for PHLS surveillance of "non-foodborne, indigenous, and imported zoonotic and parasitic infections" in England and Wales.