Predominance of HIV-1 Subtype A and D Infections in Uganda

To better characterize the virus isolates associated with the HIV-1 epidemic in Uganda, 100 specimens from HIV-1-infected persons were randomly selected from each of two periods from late 1994 to late 1997. The 200 specimens were classified into HIV-1 subtypes by sequence-based phylogenetic analysis of the envelope (env) gp41 region; 98 (49%) were classified as env subtype A, 96 (48%) as D, 5 (2.5%) as C, and 1 was not classified as a known env subtype. Demographic characteristics of persons infected with the two principal HIV-1 subtypes, A and D, were very similar, and the proportion of either subtype did not differ significantly between early and later periods. Our systematic characterization of the HIV-1 epidemic in Uganda over an almost 3-year period documented that the distribution and degree of genetic diversity of the HIV subtypes A and D are very similar and have not changed appreciably over that time.

HIV strain characterization and phylogenetic analysis have played a key role in elucidating epidemiologic and historical aspects of HIV transmission worldwide (1). In Thailand, for example, molecular analyses of virus isolates documented the independent introduction and spread of two different HIV-1 subtypes, B and E, as well as the increasing proportion of subtype E relative to B in injection drug users over time (2-8). Information from these studies clarified the dynamics of the Thai epidemic and influenced the decision to introduce a bivalent subtype B/E vaccine in the first HIV-1 vaccine efficacy trials recently initiated there (6). However, few other studies have described HIV-1 strains or the phylogenetic relationships of sequences from infections sampled in a systematic manner. This is especially true in central Africa, where the HIV epidemic has been present for a relatively long time (1-3,6,7,9-12).

Uganda, where the prevalence of HIV-1 is one of the highest in the world, has been a focus of research and intervention efforts, including vaccine development for the first vaccine trial in Africa. Previous studies documented HIV-1 subtypes A and D as important strains, with a limited distribution of other variants (13-19). The primary objective of our study was to characterize the recent virus isolates of the HIV-1 epidemic in Uganda by describing the distribution and genetic diversity of the principal HIV-1 subtypes.

In an ongoing collaborative effort between the Uganda Virus Research Institute and the Centers for Disease Control and Prevention to study HIV-1 genetic diversity, isolates from a number of different clinical sites and counseling and testing centers in Uganda were collected and characterized (19). To obtain uniform and consistent sampling over time from the Kampala and Mpigi districts of central Uganda, where most specimens were collected, we selected two sites in Kampala (Mulago Hospital, Nsambya Mobile Unit) and one site in Entebbe (Uganda Virus Research Institute Clinic). From more than 1,800 specimens collected from these sites between late 1994 through 1997, we chose all seropositive specimens from the earliest period (the last quarter of 1994 through the first quarter of 1995, n=393, and the last two quarters of 1997, n=135). After determining that the major demographic factors, such as mean age (p=0.76), age group (p=0.20), sex (p=0.12), and marital status (p=0.14), were not significantly different between persons seen in either period, we selected 100 specimens at random from each period for further analysis. Because local resources were limited, clinical (World Health Organization stage) and immunologic (CD4 and CD8 counts) data were available from only a subset of patients. Although limited by the number of specimens available and by laboratory capacity, our sample size could detect a minimum absolute change of more than 20% in either subtype A or D with a power of 80% and with 95% confidence.

Of all 200 specimens, 98 (49%) were classified as env subtype A, 96 (48%) as D, 5 (2.5%) as C, and 1 unclassified into a known env subtype category. The demographic characteristics of persons infected with the two principal HIV-1 subtypes, A and D, were very similar, and the proportion of either subtype did not differ significantly between early and later periods (Table 1). In addition, there were three subtype C isolates and one isolate of undetermined subtype in the early period and two subtype C isolates in the later period. 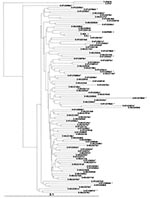 Figure. Phylogenetic classification of env gp41 HIV-1 sequences from Ugandan (UG) patients (GenBank accession numbers for subtypes A and D are pending). Numbers before the abbreviation UG indicate the year of specimen...

Figure illustrates the phylogenetic trees for all HIV-1 env subtype A and D isolates. The mean pairwise intrasubtypenucleotide divergence for env gp41 was 7.8% (3.6%-22.3%) for subtype A specimens and 7.2% (2.8%-12.5%) for subtype D specimens. The translated amino acid regions of gp41 revealed only minor substitutions in subtypes A and D (data not shown). When specimens were further stratified by period and clinic, intrasubtype divergence of the two subtypes was similar, with the percentage of divergence slightly higher in the later period (Table 2). There was no clear segregation or clustering by period or locale (Figure).

In the subset of persons with clinical or immunologic data, the clinical characteristics of persons infected with env subtype A or D were very similar; any differences were not significant (Table 3).

Our detailed and systematic characterization of the HIV-1 epidemic in Uganda over an almost 3-year period has shown that the distribution and degree of genetic diversity of the two predominant env subtypes, A and D, are very similar and have not changed appreciably over that time. However, there are two caveats when interpreting our results. First, our sample was collected cross-sectionally without known dates of infection. Second, our available sample size was not large enough todocument small changes in the proportion of either A or Dsubtypes. Nevertheless, the proportion of those two subtypes observed in specimens from the two periods were virtually identical.

Our results are consistent with those of previous studies indicating that both subtypes A and D have been present as major strains in the Ugandan epidemic since the mid-1980s (13-17). The similar mean and range of intrasubtype variation for subtypes A and D in the env gp41 region in this report, as well as in the env C2-V3 we reported earlier (19), also suggest that the two predominant HIV-1 subtypes have both been present in Uganda for a relatively long period.

The lack of significant clustering by period or clinic in the phylogenetic analyses suggests that infections from both subtypes are transmitted in a broad, heterogeneous manner in central Uganda. Similarly, our examination of a subset of patients with clinical or immunologic data, in combination with similar overall demographic characteristics, suggests that persons with subtype A or D had similar levels of immune suppression. Since this information was independently collected at three sites before genetic characterization of infecting HIV-1 strains, a systematic selection bias with respect to subtype appears unlikely.

The presence or absence of significant changes in subtype distribution in different populations is ecologic and by itself does not constitute definitive evidence for or against potential subtype-specific differences in transmissibility, pathogenesis, or clinical symptoms (25). In Uganda, where subtypes A and D are found in a large proportion of the population, current and future prospective studies will help to address these crucial research questions.

Although few countries, especially those with limited resources, have the necessary infrastructure to systematically monitor the HIV-1 epidemic, periodic molecular analyses such as this one in Uganda are needed, particularly if trials of subtype- specific vaccines are being considered. Since the HIV-1 pandemic is becoming increasingly complex, with greater heterogeneity and the presence of recombinant viruses (26), a major challenge will be to develop cost-effective technologies to characterize viruses without sequencing (1). While more rapid typing methods are available to determine the subtype distribution (19), we needed the labor-intensive sequencing and phylogenetic analysis in this study to describe the genetic diversity in detail. Furthermore, given the time and resources necessary to develop vaccine candidates, confirmation from this and previous studies that subtypes A and D continue to be the predominant subtypes with consistently minor contributions from other strains may have important implications for vaccine research.

Dr. Hu is a medical epidemiologist at the Centers for Disease Control and Prevention in Atlanta, Georgia. His research interests include the impact of viral and host genetic variation on the molecular epidemiology and pathogenesis of HIV-1.

We thank the clients and staff of the Uganda Virus Research Institute in Entebbe, especially Gibson Anyaegani, Steven Balinandi, and Dennis Olara, for technical services; the Mulago Hospital and Nsambya Mobile Unit in Kampala; and the reviewers of this article for their thoughtful and helpful comments.

Predominance of HIV-1 Subtype A and D Infections in Uganda