Figure 1. Map of the Caspian Sea region. Seal samples were collected from Kazakhstan, Turkmenistan, and the Apsheron peninsula, Azerbaijan.

During the spring of 2000, high death rates were reported in Caspian seals (Phoca caspica) (1), which live only in the Caspian Sea and are listed as a vulnerable species by the International Union for the Conservation of Nature (2). The die-off was first reported near the mouth of the Ural River, Kazakhstan, in late April; it subsequently spread south to the Mangistau region (Figure 1). More than 10,000 seals are estimated to have died during April and May along the Kazakhstan coast. High death rates were also reported in May and June along the Apsheron peninsula of Azerbaijan and the Turkmenistan coast. We present evidence that canine distemper virus infection was the primary cause of these deaths. 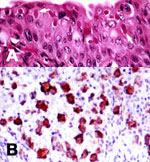 Figure 2. Tissue lesions from a Caspian seal with distemper. (A) Multiple intracytoplasmic, acidophilic viral inclusions in transitional epithelium of urinary bladder (arrows). Hematoxylin and eosin. (B) Immunohistochemical labeling of morbilliviral antigen in...

Clinical signs in infected seals included debilitation, muscle spasms, ocular and nasal exudation, and sneezing. In necropsies performed in June on eight seals from Azerbaijan (Table), no consistent gross lesions were found. However, microscopic lesions, including broncho-interstitial pneumonia, encephalitis, pancreatitis, and lymphocytic depletion in lymphoid tissues, were seen in these and four seals found in Kazakhstan in May. Multiple intracytoplasmic and rare intranuclear acidophilic inclusions, characteristic of morbillivirus infection (3), were observed in many epithelial tissue specimens (Figure 2A). Paraffin-embedded tissue sections were examined for morbillivirus antigen by an immunohistochemical technique (4). A monoclonal antibody against the nucleoprotein of phocine distemper virus, known to cross-react with canine distemper virus and cetacean morbilliviruses, was used as primary antibody. Morbillivirus antigen was detected in multiple tissues, including lung, lymph nodes (Figure 2B), spleen, brain, pancreas, liver, and epithelial tissue of the reproductive, urinary, and gastrointestinal tracts. These multisystemic tissue lesions are characteristic of distemper in terrestrial and aquatic mammals (3).

Tissues from 12 seal carcasses found on the coasts of Kazakhstan, Azerbaijan, and Turkmenistan (Table) were examined for morbillivirus nucleic acid by reverse-transcriptase polymerase chain reaction (RT-PCR). One set of universal morbillivirus primers, based on conserved sequences in the phosphoprotein (P) gene, and a second set specific for the canine distemper virus fusion (F) gene, were used in this technique (5). Tissues from nine seals were positive with both P and F primers, yielding the expected products of 429 bp and 372 bp, respectively. Selected P gene fragments were sequenced for phylogenetic comparison (Figure 3). The resulting sequences matched those of canine distemper virus and were clearly distinct from those of other members of the genus Morbillivirus, including phocine distemper virus. Except for one nucleotide change in the P gene fragment from seal 14, the sequences from Kazakhstan and Azerbaijan were identical, indicating that seals from widely separated regions of the Caspian Sea were infected by the same virus. This finding establishes spatial and temporal links between the seal deaths in these regions.

These sequences were identical to that of canine distemper virus detected in 1997 in brain tissue from a single Caspian seal in which no evidence of morbillivirus lesions was found (6). These results suggest either persistence of canine distemper virus in the Caspian seal population over a period of several years or repeated spillover from the same terrestrial reservoir.

Serum specimens from 13 seals (Table) were tested for canine distemper virus-specific immunoglobulin (Ig)M and IgG antibodies by an antibody-capture enzyme-linked immunosorbent assay (ELISA) and an indirect ELISA, respectively (7). Eight of these seals had serum IgM antibodies, and 12 had IgG antibody titers ranging from 40 to 640. These serologic data confirm recent and geographically widespread canine distemper virus infection in the Caspian seal population.

In recent years, several morbillivirus epizootics have occurred in pinniped and cetacean populations in the northern hemisphere (3). Canine distemper virus infection, the primary cause of high death rates in Baikal seals (Phoca siberica) in 1987-88 (8), was associated with a die-off in crab-eating seals (Lobodon carcinophagus) in Antarctica in 1955 (9). In both these pinniped populations, viral infection was thought to have been transmitted through contact with domestic dogs. The origin of the canine distemper virus that infected the Caspian seals is unknown, but there are anecdotal reports of contact between seals and terrestrial carnivores in this region (6). Further studies are required to determine if the latter species are infected with a canine distemper virus genetically similar to that found in the seals. The epidemiology of canine distemper virus infection, including its effects on the Caspian seal population, also remains to be investigated.

High levels of chemical contaminants have been recently identified in tissues of Caspian seals (10). As some of these substances have been shown to have immunotoxic effects in seals at the reported concentrations (11), further work is under way to determine whether pollutants contributed to these deaths.

Dr. Kennedy is head of the Diagnostic Unit of the Veterinary Science Division, Department of Agriculture and Rural Development, Belfast, Northern Ireland. His research interests include morbilliviruses of aquatic mammmals and mammalian circoviruses.

This work was partially funded by the World Bank through a donation by the Japanese Consultant Trust Fund, as well as by the Offshore Kazakhstan International Operating Company.