Until recently, members of the genus Lactococcus were considered opportunistic pathogens (1,2). They are often misidentified as enterococci or streptococci (3,4), and the difficulties in correctly identifying them have probably hindered elucidation of their clinical significance. However, the number of clinical cases associated with infections by these microorganisms has increased in the last decade in both humans and animals (5-7). Lactococcus lactis subsp. lactis, L. piscium, and L. garvieae are recognized as the species with clinical significance for human and veterinary medicine (2,8). In humans, L. garvieae and L. lactis subsp. lactis have been associated with endocarditis (9,10) and have also been isolated from clinical samples of blood, skin lesions, and urine (5,7). In veterinary medicine, L. garvieae and L. piscium are pathogenic for various fish species (8,11,12), and L. garvieae causes mastitis in ruminants (13,14). However, infection by L. lactis subsp. lactis in animals has not previously been reported. We present the first microbiologic and molecular evidence for infection produced by L. lactis subsp. lactis in waterfowl.

From September to November 1998, a mass die-off was detected among waterfowl in southwestern Spain, affecting >3,000 birds (0.6% of the total waterfowl population in the area). The species most affected were coots (Fulica atra) (26.9%), shovelers (Anas clypeata) (25.1%), and mallards (Anas platyrrhynchos) (13.8%). Overall, 20% of the birds died. Affected birds showed general weakness, evidenced by drooping wings and sluggishness; approximately 50% had respiratory distress. At necropsy, most animals had mild lung congestion; no other lesions were found at postmortem examination.

Samples from the lungs, liver, and spleen of five diseased birds (one mallard, S-15; three shovelers, S-16, S-18, and S-19; and one coot, S-17) were submitted to the Animal Health Department at the School of Veterinary Medicine of Madrid for microbiologic analysis. After 48 hours of incubation at 37ºC, pure cultures of weakly -hemolytic catalase negative cocci were obtained on blood agar plates from samples of lung (S-15, S-16, and S-17) and liver and spleen (S-15, S-16, S-17, and S-18). All 11 clinical isolates had an identical biochemical profile, which was identified as L. lactis subsp. lactis by the Rapid ID 32 Strep system (bioMérieux España, S.A., Madrid).

L. lactis subsp. lactis and L. garvieae are the two species more frequently found in human and animal infections (2). Routine clinical microbiologic diagnosis requires accurate discrimination of the two species, as their similar biochemical reaction patterns may lead to misidentification (2,4). Although physiologic tests, differences in antimicrobial susceptibility, whole-cell protein, and DNA or RNA analysis (4,7,13) have been proposed to distinguish them, some of these techniques are not reliable or may be too time-consuming, limiting their use for routine identification. For these reasons, the clinical isolates were also identified by a polymerase chain reaction (PCR) assay, which has been successfully used to identify many other pathogens (15,16).

Specific primers LLF 5'-GCAATTGCATCACTCAAAGA and LLR 5'-ACAGAGAACTTATAGCTCCC were designed from diagnostic regions of the L. lactis subsp. lactis 16S rRNA gene sequence (accession number M58837). PCR amplifications were performed in a 100-µL reaction volume containing 150 ng each of the two primers, 1 mM each of deoxynucleoside triphosphate, 1 U of Taq DNA polymerase (Biotools, Inc., Madrid, Spain), and 25 ng of template DNA in 1x reaction buffer. The amplification was carried out in a PTC-100 thermal cycler (MJ Research, Inc., Watertown, MA), under the following conditions: initial denaturation at 94°C for 2 minutes, followed by 30 cycles of denaturation for 1 minute at 92°C, primer annealing for 1.5 minutes at 50°C, primer extension for 2 minutes at 72°C, and a final extension of 5 minutes at 72°C. The following bacterial strains were used to test the specificity of the PCR assay: L. lactis subsp. lactis, ATCC 19435 and ATTC 11007; L. garvieae, NCFB 2155; four clinical isolates of Lactococcus garvieae (1336, 1458, 1982, and 4294, isolated from lactococcosis in trout); L. piscium, NCFB 2778; Streptococcus iniae, ATCC 29187; Vagococcus fluvialis, NCFB 2497; and Enterococcus faecalis, CECT 481. All the L. lactis subsp. lactis clinical isolates generated an expected PCR amplification product of 650 bp. No amplification was observed with any other Lactococcus species tested, indicating the specificity of the PCR assay (Figure 1). These results confirmed those of the biochemical identification, as well as the utility of this PCR assay for specific, rapid, and accurate identification of this microorganism. In addition, the fact that no PCR amplification was observed with clinical isolates when tested with a PCR specific for L. garvieae (17) corroborates the identification (data not shown). 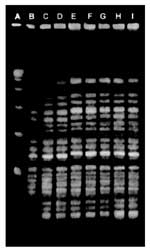 Pulsed-field gel electrophoresis (PFGE) with the enzyme SmaI was used for molecular characterization of the clinical isolates, as described by Vela et al. (18). This technique has been successfully applied for strain identification and epidemiologic investigations of lactococci (19,20). Indistinguishable restriction patterns were obtained from all clinical isolates (Figure 2), which were clearly distinct from the pulsotypes of L. lactis subsp. lactis ATCC 19435, L. garvieae, and L. piscium (data not shown). These PFGE results indicate that infection was produced by a single strain of L. lactis subsp. lactis in all the animals studied. The bacteriologic and molecular results clearly confirm the isolation of L. lactis subsp. lactis in waterfowl, the first confirmation of infection in animals caused by this microorganism.

Wild animals, including waterfowl, are known reservoirs for various pathogens (21). We can only speculate about the possibility that waterfowl may be a reservoir for this bacterium. However, wild animal reservoirs for other species of lactococci have been described (22).