Modeling Potential Responses to Smallpox as a Bioterrorist Weapon 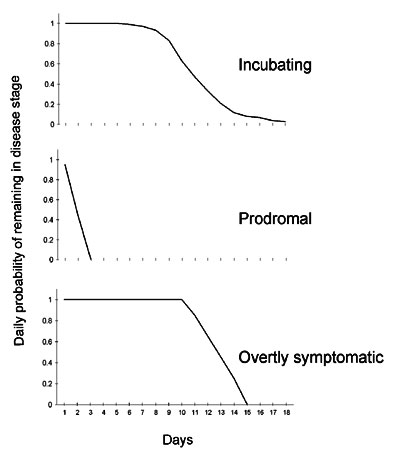 1Others have suggested that the terms "preeruptive" or "initial" are more descriptively accurate of this stage (6). However, because "prodromal" is used in many standard textbooks (7,8,17), we will use this term.

3The United States stopped routine vaccination of the civilian population in 1972 (5). In July 1998 in the United States, there were approximately 109.9 million persons <30 years of age, representing 41% of the total resident population (20). Most of these people have not been vaccinated against smallpox. In addition, the immunologic status of those who were vaccinated >30 years ago must be considered. Historical data indicate that vaccination 20 to 30 years ago may not protect against infection but will often protect against death (8,21). No reports, however, define the probability of such persons' transmitting the disease to susceptible persons. Faced with such uncertainty, we chose the simplest approach of assuming an unlimited supply of susceptible persons.

5The number, severity, and cost of vaccine-induced side effects is the subject for a separate paper.

8Although there are some historical data regarding how infected persons interacted and infected others, all such data were collected when circumstances differed from those of today's societies, particularly with regard to travel and spread of information. Although air and other modes of mass travel were common before smallpox was eradicated, the numbers of travelers and the total miles traveled have vastly increased in the past 30 years. Similarly, although mass media were well known and used in the 1960s and 1970s, more outlets are available to spread information than ever before. It is unknown how these and other changes could affect the spread of smallpox.