Thirty-four rodents captured in southern California were studied to increase our knowledge of the arenaviruses indigenous to the western United States. An infectious arenavirus was isolated from 5 of 27 California mice but none of the 7 other rodents. Analyses of viral nucleocapsid protein gene sequence data indicated that the isolates from the California mice are strains of a novel Tacaribe serocomplex virus (proposed name “Bear Canyon”) that is phylogenetically most closely related to Whitewater Arroyo and Tamiami viruses, the only other Tacaribe serocomplex viruses known to occur in North America. The discovery of Bear Canyon virus is the first unequivocal evidence that the virus family Arenaviridae is naturally associated with the rodent genus Peromyscus and that a Tacaribe serocomplex virus occurs in California.

Six arenaviruses are known to cause severe disease in humans (1). LCMV is an agent of acute central nervous system disease and congenital malformations; LASV is the agent of Lassa fever in western Africa; and JUNV, MACV, GTOV, and SABV are etiologic agents of hemorrhagic fever in Argentina, Bolivia, Venezuela, and Brazil, respectively. The occurrence of human disease caused by these viruses ranges from sporadic to hyperendemic.

Antibody to an arenavirus recently was found in California mice (Peromyscus californicus) captured in the Santa Ana Mountains in Orange County, California (9). The purpose of our study was to determine the identity of the arenavirus associated with such mice in southern California.

Rodents were captured in Sherman traps (H.B. Sherman Traps, Inc., Tallahassee, FL) or Tomahawk live traps (Tomahawk Live Trap Co., Tomahawk, WI). Fifty traps were set at the Bear Canyon Trailhead on November 12, 1998; 20 traps were set at both El Cariso #1 and El Cariso #2 on June 10, 1998. A blood sample was collected from each rodent, and the blood samples and rodent carcasses were shipped on dry ice to the University of Texas Medical Branch. Subsequently, the carcasses and samples of lung, heart, liver, and skeletal muscle were deposited in the Museum of Texas Tech University, and mammalogists at Texas Tech University identified each rodent to species level on the basis of morphologic features of the animal’s skin and skull.

The blood samples were tested for antibody to WWAV by using an enzyme-linked immunosorbent assay (9). The test antigen was a detergent extract of Vero E6 cell monolayers infected with the WWAV prototype strain AV 9310135. The control (comparison) antigen was prepared from uninfected Vero E6 cell monolayers in a manner quantitatively identical to that used to prepare the test antigen. Serial fourfold dilutions (from 1:80 through 1:5,120) of each blood sample were tested against both antigens. The adjusted optical density (AOD) of a blood-antigen reaction was the OD of the well coated with the test antigen less the OD of the corresponding well coated with the control (comparison) antigen. A sample was considered to be antibody-positive if the AOD at 1:80 and 1:320 both were >0.200 and the sum of the AODs for the series of fourfold dilutions (from 1:80 through 1:5,120) was >0.750. The criteria for antibody positivity were based on the results of a laboratory study of white-throated woodrats (N. albigula) experimentally infected with the WWAV prototype strain AV 9310135 (10). The antibody titer of a positive sample was the reciprocal of the highest dilution of that sample for which the AOD was >0.200.

A 10% wt/vol crude homogenate of brain tissue from each animal was tested for infectious arenavirus by cultivation in a monolayer of Vero E6 cells (4). Cells scraped from the monolayer on day 13 after inoculation were tested for arenaviral antigen by an indirect fluorescent antibody test. The primary antibody in that test was a hyperimmune mouse ascitic fluid prepared against the WWAV prototype strain AV 9310135.

The nucleotide sequence of a 489-nt fragment of the nucleocapsid protein (NP) gene of isolate A0070039 and the sequence of the homologous fragment of the NP gene of each of the four other viral isolates from rodents included in this study were determined (Table). Subsequently, the nucleotide sequence of a 616-nt fragment of the NP gene of isolate A0070039 was determined. The 616-nt fragment included the entire 489-nt NP gene fragment and represented the genomic region that has been the basis of several comprehensive studies on the phylogeny of the arenaviruses (11–15). Total RNA was extracted from infected Vero E6 cells by using TRIzol Reagent (Life Technologies, Inc., Rockville, MD). Reverse transcription (RT) and polymerase chain reaction (PCR) amplification of the 489-nt gene fragment were performed with the Access RT-PCR Kit (Promega Corp., Madison, WI) in conjunction with oligonucleotides AVNP3 (5´-TCTTGATGACTATTCCCTTATGC-3´) and AVNP4 (5´-AACACTGTGGTTGAGTTTGATAG-3´). RT-PCR amplification of the 616-nt gene fragment was done by using SuperScript II Rnase H- Reverse Transcriptase (Invitrogen Life Technologies, Carlsbad, CA) and PCR SuperMix (Invitrogen Life Technologies) in conjunction with oligonucleotides ARE3´-END, and AVNP7 (5´-TCTGGAGAAGGATGGCC-3´) and AVNP8 (5´-ACATGATACAATCCATCAATGCACAGTG-3´), respectively (16). PCR products of the expected size (535 bp or 661 bp) were purified from agarose gel slices with the QIAquick Gel Extraction Kit (Qiagen, Inc., Valencia, CA). Both strands of each purified PCR product were sequenced directly by using the dye termination cycle sequencing technique (Applied Biosystems, Inc., Foster City, CA) in conjunction with oligonucleotides AVNP3 and AVNP4 or AVNP7 and AVNP8. The nucleotide sequences generated in this study were deposited in the GenBank nucleotide sequence database under accession nos. AY093616 and AF497572 through AF497575.

The sequence of the 616-nt fragment of the NP gene of isolate A0070039 was compared with the sequence of the homologous region of the NP genes of WWAV strains AV 9310135, AV 98490013, AV 96010025, AV 96010151, AV 96010024, and AV A0400174, TAMV, the 13 South American arenaviruses, LCMV, and LASV. The GenBank database sequences included in the analyses were accession nos. U52180, AY012711, AY012720, AY012717, AY012710, AY012713, U43690, Y012687, U43687, U43689, K02734, U62561, U43685, U43686, U70802, X62616, U41071, M20304, U43688, U34248, M20869, and AF182272. The predicted amino acid sequences were aligned by using the computer program CLUSTAL W1.7 (17). The multiple nucleotide sequence alignment was constructed manually based on the results of the amino acid sequence alignment. The analyses of the multiple nucleotide sequence alignment were done by using programs in the computer software package PAUP*, version 4.0b8a (18). The maximum likelihood (ML) analysis used the GTR+I+G model of substitution and the heuristic search option with a gamma shape parameter and transition-transversion ratio (Ti/Tv) of 0.508 and 1.96, respectively. The Modeltest program (19) indicated that the GTR+I+G model of substitution best fit the data for the likelihood analysis. Genetic distances were calculated by using the p model and Kimura two-parameter distance model (20). Sequence identities were calculated by subtracting the uncorrected p model distances from 1.0. The neighbor-joining (NJ) analysis used the Kimura genetic distances. The maximum parsimony (MP) analyses (all characters weighted equally, first and second nucleotide positions only, and amino acid sequences predicted from nucleotide sequences) were restricted to informative characters, with nodal support estimated by bootstrap analysis (21). Bootstrap support for the results of the NJ and MP analyses was based on 1,000 pseudoreplicate data sets generated from the original multiple nucleotide sequence alignment.

Sequence identities among the 489-nt NP gene fragments generated from the five isolates from the California mice ranged from 96.3% to 100.0%, indicating that the isolates are strains of a single virus. When compared with other arenaviruses, the 616-nt NP gene fragment of isolate A0070039 exhibited the highest nucleotide sequence identity and predicted amino acid sequence identity with (in decreasing order) the NP gene of WWAV prototype strain AV 9310135 (72.7% and 82.9%, respectively), TAMV (72.6% and 76.6%, respectively), the 13 South American arenaviruses (ALLV, AMAV, FLEV, GTOV, JUNV, LATV, MACV, OLVV, PARV, PICV, PIRV, SABV, and TCRV: 55.5%-63.5% and 47.8%-62.0%, respectively), and LCMV and LASV viruses (51.5%-51.9% and 42.7%-43.4%, respectively). In the same analysis, nucleotide and amino acid sequence identities between WWAV and TAMV were 73.1% and 80.0%, respectively, and nucleotide and amino acid sequence identities among the 13 South American arenaviruses ranged from 54.9% to 76.5% and 47.3% to 86.2%, respectively. Collectively, these results indicate that the arenavirus isolated from the California mice is distinct from all other Tacaribe complex viruses. The name “Bear Canyon” is proposed to denote the geographic origin of the first isolate of this novel virus, and strain A0070039 is designated as the prototype strain of BCNV. 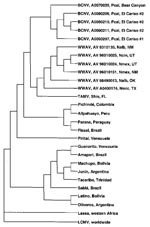 The results of the ML analysis of nucleotide sequence data (Figure), NJ analyses of Kimura two-parameter genetic distances, and MP analyses of nucleotide and amino acid sequence data all indicated that BCNV, WWAV, and TAMV are monophyletic and phylogenetically distinct from the South American arenaviruses, LCMV, and LASV. Bootstrap support for monophyly of BCNV, WWAV, and TAMV was 100% in both the NJ and MP analyses.

Previous studies of wild rodents in coastal southern California (Los Angeles, Orange, San Bernardino, San Diego, and Ventura Counties) showed antibody to an arenavirus in dusky-footed and desert woodrats, a brush mouse, California mice, a cactus mouse, deer mice, and western harvest mice (3,9). The isolation of BCNV from California mice is the first unequivocal evidence that a Tacaribe complex virus occurs in California and that the virus family Arenaviridae is naturally associated with the rodent genus Peromyscus. Further work is needed to determine the identity of the Tacaribe complex virus(-es) associated with woodrats, brush mice, cactus mice, deer mice, and western harvest mice in southern California.

In a recent study (5), WWAV was isolated from white-throated woodrats captured in northwestern New Mexico and western Oklahoma, a bushy-tailed woodrat (N. cinerea) in southern Utah, Mexican woodrats (N. mexicana) in central New Mexico and southern Utah, and southern plains woodrats (N. micropus) in southern Texas. The broad geographic association of WWAV with the rodent genus Neotoma suggests that WWAV is the arenavirus associated with dusky-footed woodrats in the Santa Ana Mountains.

Human disease caused by Tacaribe complex viruses has been studied almost exclusively in South America. The results of our study indicate that there are substantial genetic differences among BCNV, WWAV, and TAMV. The genetic sequence differences and similarities among these viruses should be considered in the development of molecular-based assays for diagnosis of human disease caused by North American arenaviruses.

Charles Fulhorst is an associate professor and member of the Center for Tropical Diseases, University of Texas Medical Branch, Galveston, Texas. His research interests include the ecology and epidemiology of rodent-borne arenaviruses and hantaviruses in the Americas.