An outbreak of cyclosporiasis occurred in attendees of a wedding reception held in Philadelphia, Pennsylvania, on June 10, 2000. In a retrospective cohort study, 54 (68.4%) of the 79 interviewed guests and members of the wedding party met the case definition. The wedding cake, which had a cream filling that included raspberries, was the food item most strongly associated with illness (multivariate relative risk, 5.9; 95% confidence interval, 3.6 to 10.5). Leftover cake was positive for Cyclospora DNA by polymerase chain reaction analyses. Sequencing of the amplified fragments confirmed that the organism was Cyclospora cayetanensis. The year 2000 was the fifth year since 1995 that outbreaks of cyclosporiasis definitely or probably associated with Guatemalan raspberries have occurred in the spring in North America. Additionally, this is the second documented U.S. outbreak, and the first associated with raspberries, for which Cyclospora has been detected in the epidemiologically implicated food item.

On June 10, 2000, a total of 83 persons attended a catered wedding reception in Pennsylvania. Approximately 8 days later, the bride notified the local health department that she, her husband, and many guests at the reception had a gastrointestinal illness. Stool specimens from attendees were positive for oocysts of the coccidian parasite Cyclospora cayetanensis, and an epidemiologic investigation was begun by the Philadelphia Department of Public Health and the Centers for Disease Control and Prevention (CDC).

Previous foodborne outbreaks of cyclosporiasis in the United States have been associated with consumption of fresh raspberries, mesclun lettuce, and basil (1–8). An important feature of the biology of Cyclospora is that oocysts excreted in feces require days to weeks outside the host to sporulate and thus to become infectious. However, the minimum time required for sporulation is unknown. Cyclospora oocysts must survive in the environment long enough to sporulate and infect a susceptible host, which suggests that they are very hardy.

A retrospective cohort study was conducted by administering a structured questionnaire by telephone about symptoms and event-related exposures. A case of cyclosporiasis was defined as onset of illness 1–14 days after the reception and either (a) one positive stool specimen and at least one gastrointestinal symptom (i.e., loose stools, nausea, vomiting, stomach cramps, gas/bloating, loss of appetite, and unintentional weight loss) or constitutional symptom (i.e., fever, chills, muscle aches, generalized body aches, and headaches); (b) any loose stools in a 24-hour period and at least one other gastrointestinal or constitutional symptom; or (c) a total of at least three gastrointestinal symptoms.

We attempted to identify more cases of cyclosporiasis by having the Pennsylvania State Bureau of Epidemiology alert health departments throughout the state of the investigation. We also requested the catering company to contact the six groups to which they had served raspberries during the period June 2–4 that might have been from the suspected raspberry shipments.

The local diagnostic reference laboratory examined stool specimens from five patients for Cyclospora oocysts by Kinyoun’s modified acid-fast technique. CDC reevaluated specimens from three of these patients either by examining slides made by the local laboratory or by UV fluorescence microscopy of a stool specimen concentrated by the formalin-ethyl acetate technique. An unknown number of specimens were tested at the local diagnostic reference laboratory for Cryptosporidium parvum; Salmonella, Shigella, and Campylobacter spp.; and Escherichia coli O157:H7.

The supernatant from each sample was aspirated to within 1 mL of the bottom, and the pellets were suspended in this volume and transferred to a 1.5-mL microcentrifuge tube. The samples were then centrifuged for 2 min in a microcentrifuge at 14,000 x g, and the supernatant was aspirated. The final pellets were suspended in 50 µL of distilled water, and a 10-µL volume of each sample was spotted onto Flinders Technologies of Australia (FTA) filters (Fitzco, Inc., Maple Plain, MN) for DNA extraction and subsequent polymerase chain reaction (PCR) analyses as described previously (9).

CDC’s methods were as follows. DNA was extracted directly from nine randomly selected 1-g portions of raspberry filling from the cake by using selected components from the FastDNA kit (BIO 101, Inc., Vista, CA). The portions were placed into tubes containing disruption beads that were included in the kit, and DNA extraction was performed as described (10).

Nested PCR amplification was performed by using primers modified from those described elsewhere (11). The restriction sites EcoRI and BamHI were removed from the 5´ end, and bases matching the C. cayetanensis small subunit (SSU) rRNA coding region were added. Thus, primers CYCF1 (5´-ATTACCCAATGAAAACAGTTT-3´) and CYCR2 (5´-TGCAGGAGAAGCCAAGGTAGG-3´) were used for the first step of nested amplification; the preamplified fragment was nested with primers CYCF3 (5´-GCCTTCCGCGCTTCGCTGCGT-3´) and CYCR4 (5´- TCGTCTTCAAACCCCCTACTG-3´). Amplification with these primers generates a 294-bp fragment from the C. cayetanensis SSUrRNA coding region.

Besides the nested PCR, a 636-bp fragment from the Cyclospora sp. SSUrRNA, flanked by primers CYCF1/CYCR2, was amplified and sequenced to identify the parasite at the species level. This fragment contains substitutions that allow differentiation among the Cyclospora spp. for which the sequence of the SSUrRNA coding region is available in GenBank (i.e., C. cayetanensis, C. cercopitheci, C. colobi, and C. papionis). Sequencing reactions were performed on PCR products that had been purified with the StrataPrep PCR Purification Kit (Stratagene, La Jolla, CA). Sequencing reactions, analyses, and assemblage of sequences were performed as described (12).

The reception facility was inspected, and food-handling and storage practices were observed. Information about illness in the catering staff was collected by examining the caterer’s sick logs. The caterer was also asked to contact the health department if staff called in sick. Ill staff members would then be asked whether they had had a gastrointestinal illness during the 3 weeks before and after the reception.

We did not identify additional cases through the Pennsylvania State Bureau of Epidemiology’s alert to local health departments. Moreover, the catering company contacted the six groups to which they served raspberries during June 2–4, and no additional cases were identified.

For three of the five case-patients who had laboratory-confirmed cyclosporiasis (Table 1), stool specimens were sent to CDC and reconfirmed as positive for Cyclospora oocysts. Results of stool testing for other microbes were negative.

None of the catering staff reported having been ill during the 3 weeks before or after the reception. However, on July 18, the local health department learned, through routine surveillance, about a caterer, who had worked during the reception, in whom gastrointestinal illness developed 8 days later; she had laboratory-confirmed cyclosporiasis. Although she could not recall her duties for the event, her usual tasks included cutting and serving wedding cake. She also identified two other staff members in whom gastrointestinal illness developed a median of 6 days after the reception; their symptoms resolved spontaneously, and no stool specimens were tested. They had not worked during the reception but had worked later that day and reported that they probably ate leftover cake. 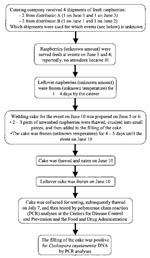 Figure 2. Flow chart with details about raspberries and wedding cake served at a wedding reception in June 2000 in Pennsylvania. The shipment of raspberries the catering company received on June 3 included... 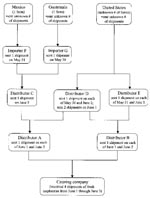 Figure 3. Flow chart with details about the possible sources of the raspberries used in the wedding cake served at a wedding reception in June 2000 in Pennsylvania. The Guatemalan farm was also...

The one Guatemalan farm that could have supplied the raspberries used in the cake was also one of the possible sources (and the only Guatemalan source) of raspberries served at a bridal brunch in Georgia in May 2000 that was associated with an outbreak of cyclosporiasis (14). The Guatemalan farm was the only known source in common to the events in Pennsylvania and Georgia. FDA inspected this farm and found no definitive source for contamination (J. Guzewich, pers. comm).

We do not know whether the outbreak involved more cases in Pennsylvania than the cluster of cases we investigated. The catering company for the wedding reception received four shipments of fresh raspberries the weekend before the cake was prepared; which raspberries from which shipment were used for the reception rather than the other six events during the period of interest at which raspberries were served is unknown. We did not identify any more cases of cyclosporiasis by contacting the other six groups. However, perhaps only one of the shipments of raspberries and only some of the raspberries in that shipment were contaminated. The same Guatemalan farm was one of the possible sources of the raspberries (and the only Guatemalan source) served at the reception in Pennsylvania in June 2000 and the bridal brunch in Georgia in May 2000. The identification of only one farm in common to the two events suggests that the events were related.

The cyclosporiasis outbreak in Philadelphia is the first for which raspberries that reportedly had been frozen, rather than served fresh, were implicated. The raspberries used in the wedding cake had been bought fresh but then reportedly frozen and thawed twice before they were served (Figure 2). The temperature of the freezer where the raspberries were stored is unknown. When the freezer was inspected 2 weeks after the outbreak, the temperature of the freezer was -3.3°C, which might not have been cold enough to kill Cyclospora oocysts. Although limited information is available about the effects of freezing on their survival, for Cryptosporidium parvum, another coccidian parasite, oocysts remain infectious for mice after storage at –10°C for 1 week (15). Freezing at sufficiently cold temperatures for sufficiently long periods, as during commercial freezing, should kill Cyclospora oocysts. For Crytosporidium parvum, oocysts were not infectious for mice after storage at –15°C for 1 week (15).

This Pennsylvania outbreak is the second documented U.S. outbreak, and the first associated with raspberries, for which Cyclospora has been detected in the epidemiologically implicated food item. The first U.S. outbreak for which Cyclospora was detected in a food item occurred in 1999 in Missouri and was associated with fresh basil in a chicken pasta salad (8). Neither the raspberries in 2000 nor the basil in 1999 had been washed. Although all produce should be thoroughly washed before being eaten, other outbreaks (2,3,7) and a laboratory study (16) have shown that washing does not eliminate the risk for Cyclospora infection.

Fortunately, leftovers from both the Pennsylvania and Missouri outbreaks had been frozen and were available for testing. Contamination of the implicated food items for the 1999 outbreak was demonstrated by PCR analyses and light microscopy and for the 2000 outbreak by PCR analyses. The modes of contamination of the produce associated with outbreaks of cyclosporiasis have not yet been definitively identified for any of the outbreaks. However, molecular methods are sensitive tools that can be used to identify the organism in the vehicle and in environmental samples, which then may provide information useful for determining the mode of contamination. Molecular methods for detecting Cyclospora continue to improve (9). Continued research about the biology and epidemiology of Cyclospora is important for identifying effective measures for preventing future outbreaks.

Alice Y. Ho is the Nurse Epidemiologist for the Philadelphia Department of Public Health, Division of Disease Control. She oversees communicable disease surveillance and outbreak investigations in Philadelphia.