We describe the first case of failure of oral levofloxacin treatment of community-acquired pneumonia caused by Haemophilus influenzae. The strain showed cross-resistance to fluoroquinolones and carried four mutations in quinolone resistance–determining regions of DNA gyrase and topoisomerase IV genes.

Fluoroquinolones active against Streptococcus pneumoniae and Haemophilus influenzae, such as levofloxacin, moxifloxacin, and gatifloxacin, are currently recommended for the treatment of patients with community-acquired pneumonia whose infection may be due to strains resistant to ß-lactam and macrolide antimicrobial drugs (1–3). In Spain, both pathogens often display multiple resistance (4,5). The failure of oral levofloxacin treatment in four patients with pneumococcal pneumonia has recently been reported (6).

We describe failure of treatment of H. influenzae pneumonia in a patient who died after several days of systemic treatment with levofloxacin. The H. influenzae strain, isolated from the blood and the respiratory tract of the patient, was resistant to levofloxacin, ciprofloxacin, moxifloxacin, and gatifloxacin and carried several mutations in the quinolone resistance–determining regions (QRDR) of DNA gyrase and topoisomerase IV genes.

On February 15, 2002, a 71-year-old woman was admitted to Hospital de l’Esperit Sant, Santa Coloma de Gramenet, Barcelona, with cough, low-grade fever, and reported fatigue. A radiograph of her chest showed infiltrates covering the right upper, middle, and lower lobes and the left basal lobe. A systemic, antimicrobial treatment of levofloxacin (500 mg/day) and teicoplanin (400 mg/day) was administered for severe community-acquired pneumonia. (The patient was allergic to penicillin.) Three months earlier, she had received erythromycin. In a second visit, she was treated with inhaled salbutamol and glucocorticoids. In a third visit, 2 months before she became ill, she received oral moxifloxacin for 5 days.

During her hospital stay, the patient’s clinical condition worsened. Ventilation and perfusion scintiphotographs with Tc99m, an echocardiograph, and a high resolution thoracic scan were performed in an effort to identify another illness or a possible nondrained focus; results were negative. After 7 hospital days of systemic levofloxacin therapy, her clinical condition had not improved. Two blood cultures taken after an episode of fever with a temperature of 38.5°C showed that H. influenzae was resistant to fluoroquinolones (strain 32602). Treatment was switched to chloramphenicol (1 g/6 h), to which the strain was susceptible. However, on the same day as the treatment change, the patient was intubated during a severe episode of respiratory impairment and transferred to the intensive care unit of Hospital de l’Hospitalet, L’Hospitalet de Llobregat, Barcelona. Fluoroquinolone resistance was confirmed with blood cultures (strain 35102) and a bronchial aspirate (strain 35202). Antimicrobial treatment was then switched to aztreonam (1 g/8 h). The patient died 48 hours later.

Species identification, biotyping, and serotyping followed recommended protocols (7), including capsule genotyping of six capsular types (types a–f). Susceptibility testing was performed by microdilution methods, following the guidelines of the National Committee for Clinical Laboratory Standards (8). ß-lactamase activity was determined by the chromogenic cephalosporin test with nitrocephin as substrate. Quality control strains used were H. influenzae ATCC 49247, H. influenzae ATCC 51907, and Escherichia coli ATCC 25922. Determination of an eventual active efflux mechanism of fluoroquinolone resistance was carried out by MIC determination in the presence and absence of carbonyl cyanide 3-chlorophenyl (CCCP) and reserpine in all three clinical strains (9).

The three test strains and four additional H. influenzae biotype II isolates (obtained previously from blood and respiratory specimens from the geographic area where the patient lived) were examined by pulsed-field gel electrophoresis (PFGE) after digestion of bacterial DNA with SmaI (MBI Fermentas, Vilnius, Lithuania) and separation of the fragments with the CHEF Mapper apparatus (BioRad Laboratories, Hercules, CA) and were visually compared (10). 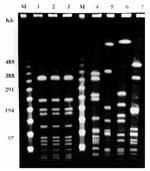 The three clinical isolates were identified as noncapsulated H. influenzae biotype II. The PFGE yielded the same pattern for each, unlike the marked diversity obtained with the four other clinical isolates from the same geographic area (Figure), and the same antimicrobial drug susceptibility testing results (Table). The results of DNA sequencing of the QRDRs of the gyrA, parC, parE, and gyrB genes are shown in the Table. All three strains presented identical amino acid substitutions. They did not produce ß-lactamase and were fully susceptible to several ß-lactam antimicrobial drugs and chloramphenicol. MICs of additional antimicrobial drugs were penicillin, 0.25 µg/mL; ampicillin, 0.12 µg/mL; amoxicillin-clavulanic acid, 0.12/0.06 µg/mL; cefuroxime, 0.12 µg/mL; cefotaxime, 0.03 µg/mL; aztreonam, 0.03 µg/mL; chloramphenicol, 0.12 µg/mL; erythromycin, 16 µg/mL; clarithromycin, 16 µg/mL; and azithromycin, 8.0 µg/mL. Quinolones, other than those depicted in the Table, had the following activity levels: ofloxacin, 32.0 µg/mL; grepafloxacin, 32 µg/mL; clinafloxacin, 2.0 µg/mL. No changes in the MICs of fluoroquinolones were observed either in the presence or absence of CCCP or reserpine, suggesting that active efflux did not contribute to fluoroquinolone resistance in any of the isolates.

This study is the first description of a clinical case of a fluoroquinolone-resistant H. influenzae pneumonia and bacteremia, resulting in therapeutic failure and death after systemic levofloxacin treatment. The causative strain was present in cultures from the patient’s blood and bronchial aspirate. This finding is consistent with the interpretation of the initial chest x-rays, which indicated a clinical case of severe community-acquired pneumonia. Similar cases of community-acquired pneumococcal pneumonia treated with levofloxacin have recently been reported (6).

We have already established that amino acid substitutions in the QRDRs of DNA gyrase and topoisomerase IV accounted for the mechanism of fluoroquinolone resistance in H. influenzae (12).The positions and the amino acid substitutions found in GyrA and ParC in this study were also present in the fluoroquinolone-resistant strains previously studied by our group (12). We have also described the Asp420Asn substitution (ParE) in another strain that exhibited high resistance levels to ciprofloxacin and other fluoroquinolones (13). However, the pattern of QRDR mutations found in the clinical strains described in this study is novel.

Use of the “mutant prevention concentration” has been proposed to discourage the selection of fluoroquinolone-resistant mutants, since resistant mutants are selected exclusively within a concentration range known as the “mutant selection window” (14). This “window” may be more easily attained with therapeutic regimes based on oral and once-daily administered doses, as is the case for moxifloxacin and levofloxacin. An important difference between S. pneumoniae and H. influenzae is that the MIC90’s for levofloxacin are 1.0-2.0 µg/mL and 0.03 µg/mL, respectively (3), a 30-fold difference. This suggests that the events necessary to reach a similar level of resistance in H. influenzae are more complex than they are in S. pneumoniae.

The peak level of levofloxacin, 4 hours after a 500-mg dose, is approximately 4.0 µg/mL (serum) and 11.0 µg/mL (epithelial fluid) (3,15), which is clearly below the MIC of 16.0 µg/mL shown by these resistant strains. Where these clinical H. influenzae strains originated is unknown. Following the patient’s oral moxifloxacin treatment 2 months before hospital admission, the H. influenzae may have become resistant to fluoroquinolones through a typical, step-by-step mutation process in the primary targets, DNA gyrase and topoisomerase IV, by means of four mutations in gyrA, parC, and parE genes. The initial treatment also may have resulted in the mutations in gyrA only, with additional mutations occurring during the subsequent treatment with levofloxacin.

The H. influenzae strain acquired several mutations in the QRDRs and was cross-resistant to all members of a group of assayed fluoroquinolones. We believe that this case may represent an emerging clinical and microbiologic challenge, which may threaten the management of pneumonia and other infections. We recommend that blood cultures taken from patients with community-acquired pneumonia be tested for fluoroquinolone resistance, particularly when the patient has already been given these antimicrobial drugs.

Page created: April 20, 2012
Page updated: April 20, 2012
Page reviewed: April 20, 2012
The conclusions, findings, and opinions expressed by authors contributing to this journal do not necessarily reflect the official position of the U.S. Department of Health and Human Services, the Public Health Service, the Centers for Disease Control and Prevention, or the authors' affiliated institutions. Use of trade names is for identification only and does not imply endorsement by any of the groups named above.