To better assess the risk for transmission of the severe acute respiratory syndrome–associated coronavirus (SARS-CoV), we obtained serial specimens and clinical and exposure data from seven confirmed U.S. SARS patients and their 10 household contacts. SARS-CoV was detected in a day-14 sputum specimen from one case-patient and in five stool specimens from two case-patients. In one case-patient, SARS-CoV persisted in stool for at least 26 days after symptom onset. The highest amounts of virus were in the day-14 sputum sample and a day-14 stool sample. Residual respiratory symptoms were still present in recovered SARS case-patients 2 months after illness onset. Possible transmission of SARS-CoV occurred in one household contact, but this person had also traveled to a SARS-affected area. The data suggest that SARS-CoV is not always transmitted efficiently. Laboratory diagnosis of SARS-CoV infection is difficult; thus, sputum and stool specimens should be included in the diagnostic work-up for SARS-CoV infection.

Severe acute respiratory syndrome (SARS) was recently described as the clinical manifestation of infection by a novel coronavirus (CoV), the SARS-associated CoV (SARS-CoV) (1–5). This syndrome was first recognized in February 2003 in Vietnam, but it was later realized that the first cases occurred in southern China in November 2002 (6,7). Subsequently, the infection rapidly spread throughout the world, and by July 2003, when the World Health Organization declared that the outbreak was contained, 8,437 cases and 813 deaths in 32 countries had been reported (8).

As the outbreak developed, epidemiologic evidence suggested that SARS-CoV was transmitted by respiratory droplets or direct contact with infected patients and possibly by fomites (9–12). In certain circumstances, transmission of SARS-CoV was particularly efficient and resulted in individual patients infecting large numbers of people (referred to as “super-spreading events”), whereas in other situations, no secondary transmission was observed (13).

A better understanding of the duration of SARS-CoV shedding and virus quantities in respiratory secretions, stool, urine, and other body fluids and of the risk factors for spreading illness to close contacts is critical to accurately assess the risk for transmission and to develop effective control strategies. To that end, we obtained serial biologic specimens and clinical and exposure data for 5 to 10 weeks after onset of illness from seven laboratory-confirmed U.S. SARS patients and their household contacts.

We targeted 103 patients who met the Centers for Disease Control and Prevention’s (CDC’s) surveillance case definition for probable SARS (14). Of these patients, 7 (7%) with laboratory-confirmed SARS-CoV infection (antibodies to SARS-CoV were detected) were enrolled; 19 (18%), including 1 confirmed SARS case-patient, declined participation; and 77 (75%) were excluded for various reasons (negative for SARS-CoV antibody at ≥21 days after illness onset, a confirmed alternative diagnosis, or foreign citizen not residing in the United States). The household contacts of seven laboratory-confirmed case-patients were also enrolled. Household contacts were defined as persons who had lived in the same household with SARS case-patients during their illness. All participants provided informed consent.

At the initial visit with the SARS case-patients, we collected data on demographics, date of illness onset, clinical symptoms, and exposure history. At the initial visit with household contacts, we gathered data on any illness they had had since their exposure to the case-patient and on the types and patterns of exposure (e.g., sleeping in the same room at night, daily contact within <3 feet, and direct skin-to-skin contact, such as kissing or hugging, with case-patients). At each subsequent visit, we collected information on any symptoms experienced by case-patients or household contacts since their previous visit, including symptoms during the current visit.

Specimens collected as a part of the diagnostic work-up were available for this investigation, and at each postenrollment visit, participants were asked to provide whole-blood, serum, stool, urine, nasopharyngeal, and oropharyngeal swab specimens. We obtained 1–10 mL of blood from adults and 0.5–5 mL of blood from children <3 years old by venipuncture or finger stick. Clotted blood was centrifuged, and serum was separated before being shipped to CDC for testing. Similar volumes of whole blood were collected in a tube containing EDTA. Nasopharyngeal and oropharyngeal samples were collected by use of a single Dacron swab with a nonwooden shaft; the swab was then placed in a sterile vial containing 2 mL of viral transport medium. Stool specimens were collected in a sterile container and sealed. Participants provided a 50-mL clean-catch collection of urine in a sterile urine cup. Specimens were processed and stored according to CDC laboratory biosafety guidelines (15). All specimens were stored at 4°C for a maximum of 72 h and shipped on ice to the CDC laboratory. If shipping within 72 h was not feasible, specimens were stored at –70°C and then shipped. 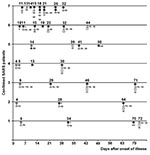 In this investigation of U.S. SARS-CoV–infected persons and their household contacts, we identified probable transmission of SARS-CoV to only 1 of 10 such contacts. We detected SARS-CoV in fecal and respiratory specimens and found that SARS case-patients may have high concentrations of virus in stools during the 2nd week of illness and continue to shed the virus in feces until at least 26 days after onset of symptoms. The amount of SARS-CoV in stool from a case-patient with moderate diarrhea was similarly high to the quantity seen in a sputum specimen collected from a different case-patient at the same interval after illness onset. However, no virus could be cultured from any stool specimens that were PCR-positive for SARS-CoV, suggesting that SARS-CoV in feces may be present in the form of either nonviable viral particles or antibody-coated virus.

The one household contact who became infected was the person who had more contact with the potential source case-patient during the first week of illness than did other members in the household. This contact was also exposed in Hong Kong along with her husband; however, she became ill >10 days after returning to the United States (16). Previously reported data suggest that the incubation period for SARS ranges from 2 to 10 days (4,17), but in some cases, the incubation period may be as long as 14 days (18). Therefore, the possibility remains that this contact may have been infected in Hong Kong. The remaining uninfected household contacts included four contacts of two case-patients with positive stool specimens in whose households simple infection-control procedures were implemented during the acute phase of illness in the index patient.

The lack of widespread household transmission of SARS found in our investigation is similar to findings in reports of the outbreak in Toronto, where 2 (6%) of 33 household contacts were infected despite unprotected contact with a SARS case-patient (19), and from the Philippines, where <1% of nonhospital contacts were reported to be infected (20). This finding supports the idea that in certain circumstances, SARS-CoV is not easily transmitted. Transmission may also be more likely to occur at the time when patients are shedding higher amounts of virus, and this period may coincide with their hospitalization, thus decreasing the degree of exposure for household contacts.

We were unable to detect SARS-CoV in specimens of our case-patients before day 14 after illness onset. We only detected virus in three case-patients: in a sputum sample of one patient at day 14 and in stool samples of two patients at day >14. All upper respiratory specimens in the first 2 weeks after onset were negative for SARS-CoV by RT-PCR; this finding differs from a report in Hong Kong, where viral RNA was detected in nasopharyngeal aspirates of 68% of case-patients at day 14 (21). Our inability to detect the virus in early respiratory samples may be associated with the type (nasopharyngeal and oropharyngeal swabs versus nasopharyngeal aspirates) of collected specimens, as well as with low amounts of virus generally seen in such specimens (1). Sputum samples may have a higher concentration of virus than upper respiratory specimens (1), consistent with our findings. Stool specimens have been found positive more frequently than upper respiratory specimens during the 2nd and 3rd week of illness, which is in accord with the limited results of this study. The inability to detect SARS-CoV in urine may be the result of a late collection of urine specimens (>14 days after illness onset). A wider use of steroids in treatment of case-patients in Hong Kong compared with case-patients in the United States may have also altered the pattern of shedding of SARS-CoV.

Persistent respiratory symptoms that were reported up until at least 2 months after onset by most of our case-patients were similar to symptoms observed by Avendano et al. (19) in a study of Canadian healthcare workers who were followed for 5 weeks after illness onset, suggesting residual illness in SARS case-patients. However, the progression of these symptoms over time is difficult to interpret without a better appreciation of the pre-illness symptoms. Antibody to SARS-CoV in some case-patients was documented as early as day 10 after illness onset. We did not have an adequate number of early serum specimens from other case-patients to determine when SARS-CoV antibody is first detectable.

Results of this investigation should be interpreted in light of several limitations. The small number of participants does not allow for accurate estimation of the risk for transmission to household members. Irregular and long intervals between collections of specimens do not permit a clear picture of the natural history of SARS-CoV infection, including documenting the precise timing of the first appearance of SARS-CoV antibody. We also may have missed the presence of shedding in stools of other case-patients who had reported diarrhea during the acute phase of illness. Possible variations in specimen collection and handling techniques could also have affected SARS-CoV detection rates in respiratory and stool specimens.

Our results suggest that SARS-CoV is not always transmitted efficiently. The early laboratory diagnosis of SARS-CoV infection is difficult; optimal timing for specimen collection and currently available diagnostic tests need to be refined further. Collecting and testing stool and sputum should be included as a part of the diagnostic work-up for SARS-CoV infection. A follow-up of recovered SARS case-patients over several months would also help to better assess possible waning of antibody titers and long-term sequelae of the disease and, thus, improve our understanding of the true illness associated with SARS-CoV infection.

Dr. Isakbaeva is an officer with the Epidemic Intelligence Service at the Centers for Disease Control and Prevention. Her recent field epidemiology research experiences have included outbreak investigations of norovirus-associated acute gastroenteritis on cruise ships and the development of hospital-based surveillance of rotavirus diarrhea in Central Asia.